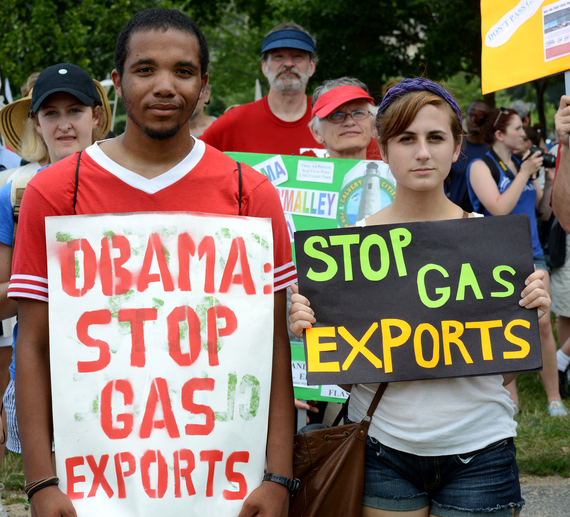 On the heels of fracking's rise in the United States, natural gas exports have been booming. There are many reasons why the federal government should be concerned about this. One in particular that might concern the Obama administration is that Congress already passed legislation to prohibit gas exports.
Advertisement
The federal legislation intending to prohibit natural gas exports has been in place since 1975, even if it has been ignored by the government for 40 years. Faced with fracking, the climate crisis and proposals to exponentially increase gas exports, three
environmental organizations
just filed a legal
petition
Advertisement
to remind the Obama administration that liquid natural gas (LNG) exports should be banned.
First, Some History
Banning exports of crude oil was a decision made by Congress when it passed the U.S. Energy Policy and Conservation Act in 1975. This export prohibition language explicitly included natural gas, but the U.S. Department of Commerce has refused to develop regulations to ensure the law is implemented and enforced. So far, the Obama administration, in particular the Department of Energy, has also
ignored the legislation to prohibit
Advertisement
gas exports as they have moved forward with approval of new LNG export terminals.
Gas exports have already increased about
1,000 percent since the late 1990s
.
The 1970s oil crisis led to a lot of new policies to address
energy security
, one reason why some
policymakers
have opposed exports of LNG today. On top of that, the social and environmental problems with the globalization of the U.S. fracking industry would be overwhelming. Much has been documented already on the local
environmental issues with fracking
Advertisement
, from destroying freshwater resources to
earthquakes
.
Fracking makes up the majority of new natural gas extraction projects in the United States, and the Department of Energy
projects
that the fracking industry is the main reason natural gas supply could grow at all over the next decades. So LNG often, if not mostly, would come from fracking.
Steep Costs to the Environment
Because pipelines cannot be built to every export market, the industry has
increasingly relied
on LNG. However, the processing and transportation of LNG is environmentally destructive regardless of the source (fracked or not). LNG terminals, for instance, are toxic
Advertisement
banes to local communities
. Any notion that burning natural gas is better than coal for the climate
goes out the window
if that gas was ever LNG. The Department of Energy
has acknowledged
the huge climate footprint associated with extracting, liquefying, and re-gasifying, as well as many other steps essential to an LNG market. Perhaps this is why the President seems to have stopped using the 'gas is a
bridge fuel
' argument.
Before continuing to provide a federal stamp on LNG exports, the Obama administration must consider that they should already be illegal.

And if that's not enough, it should also be concerned with the health of local communities affected by fracking, LNG terminals, and the ever increasing impacts
of global climate disruption.