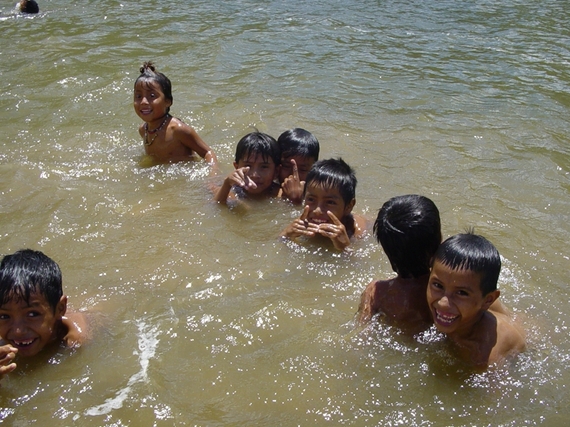 Dams have turned freshwater into the ecosystem most threatened by species extinction, displaced 80 million people and impoverished many more. Even so, the World Bank is eager to re-engage in large dam projects around the world, and other financiers are following in its wake. The US Congress has now poured cold water on these plans. In a landmark decision, it has instructed the US government to oppose the construction of large dams in international financial institutions, and called for justice for the victims of human rights abuses in their projects.

The new instructions were sponsored by Senator Patrick Leahy (D-Vt), and are part of the Consolidated Appropriations Act, the budget compromise which was approved by the US Senate and House this week. In the section on multilateral financial institutions, the act says:

"The Secretary of the Treasury shall instruct the United States executive director of each international financial institution that it is the policy of the United States to oppose any loan, grant, strategy or policy of such institution to support the construction of any large hydroelectric dam (as defined in ''Dams and Development: A New Framework for Decision-Making,'' World Commission on Dams (November 2000))."

(Like the dam industry, the World Commission on Dams basically defines dams as large if they are at least 15 meters high. You can find the language on p. 1361 of the voluminous act.)

At a time when better solutions are readily available, the Congressional decision supports a shift of public funding from large, often destructive hydropower projects to decentralized renewable energy solutions which are more effective at reducing energy poverty and protecting the environment. Under the new mandate, the US executive directors will have to object to dam projects such as Inga 3 on the Congo, Dasu on the Indus, Adjarala in Togo, Amaila Falls in the rainforest of Guyana, and the dams in the Nam Ngiep and Sekong river basins in Laos.

The budget act also takes action to support the victims of human rights abuses in development projects. It instructs the US government to "seek to ensure that each such institution responds to the findings and recommendations of its accountability mechanisms by providing just compensation and other appropriate redress to individuals and communities that suffer violations of human rights, including forced displacement, resulting from any loan, grant, strategy or policy of such institution." More specifically, Congress asks for regular updates about measures undertaken by the World Bank and the Inter-American Development Bank (IADB) to ensure reparations for the survivors of the massacres carried out under the Chixoy dam project in Guatemala. (See p. 1240 for this provision.)

More than 400 Maya Achi indigenous people were killed in a series of massacres to make way for the World Bank and IADB's Chixoy Dam on the Rio Negro in 1978. With support from International Rivers and other activists, the survivors of the massacre negotiated a reparations agreement with the Guatemalan government in 2010, but the government and financiers have dragged their feet on implementing it ever since. The new decision by the US Congress makes a big step towards finally bringing justice to the victims of the Chixoy massacres and other human rights abuses.

The World Bank has close to 200 member countries. The Bank and other international financial institutions are free to ignore the position of the US executive directors. If this happens, Congress should redirect its financial contributions to institutions that are more willing and better equipped to support clean local energy solutions. Through the Power 4 People campaign, International Rivers and other organizations are calling on governments and national parliaments to shift $1.6 billion from the World Bank's International Development Association to the Green Climate Fund and other appropriate channels for decentralized renewable energy solutions.

The language in the new congressional act is a breakthrough for healthy rivers and the rights of river-based communities, and we salute all the efforts that made it possible. At the same time, serious problems in the global energy policy of the US government and Congress continue to exist. First, the appropriations bill that was originally drafted by the Senate instructed the US government to oppose not just large dams, but also coal projects in international financial institutions. Under pressure from the fossil fuel lobby, coal projects were dropped from the final text in the negotiations with the House of Representatives. Policies to protect the climate in the operations of US export financiers were also rolled back.

Secondly, the US government plans to increase its support for large hydropower dams in Africa such as the Inga 3 Dam through USAID and the new Power Africa initiative at the same time as Congress is asking it to oppose such projects in international financial institutions. The US should not fund projects bilaterally that it would reject on the multilateral level. We celebrate an important breakthrough for rivers and rights today. Making the new policy more consistent will be the task for tomorrow.

Peter Bosshard is the Policy Director of International Rivers.