WASHINGTON -- Dozens of congressional staffers walked out of their offices Thursday afternoon to show solidarity with demonstrators who are protesting the decisions not to indict police officers who killed Eric Garner in New York and Michael Brown in Ferguson, Missouri.

Just after 3:30 p.m., the staffers stood on the steps of the U.S. Capitol with their hands raised in the "hands up, don't shoot" gesture. In interviews, the staffers said they felt the need to express their support for demonstrators calling for police accountability for officers who take the lives of unarmed black men and women. 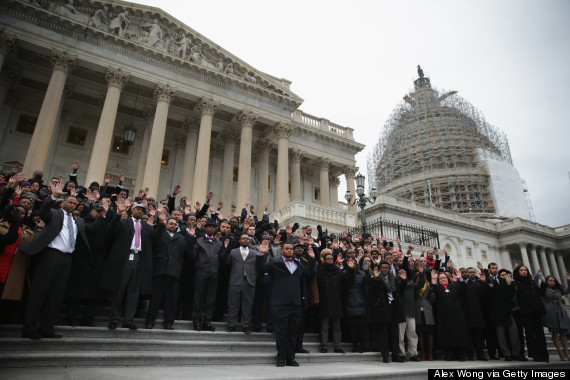 "We're coming out here to let them know, no, it's not business as usual, our lives matter, we're asserting our humanity and our dignity,” one congressional staffer told The Huffington Post.

"Even though we go to work in these prestigious buildings among prestigious people, we go home and we're still profiled, we still are part of those statistics," the staffer added. "It could have been any one of us who was Eric Garner, who was Mike Brown."

Most staffers did not speak to the press, and none who did agreed to give their names.

Another staffer said that while there may be longterm changes that come about as a result of the protest movement, it was important to assert that it was wrong to allow police officers to take lives without being held accountable.

“They want to put cameras on police officers, which is a great idea, but the Eric Garner case was seen on live TV; the entire world saw it,” said one young black congressional staffer who participated in the walkout. “President Obama said protests are necessary. This is a necessary protest.” 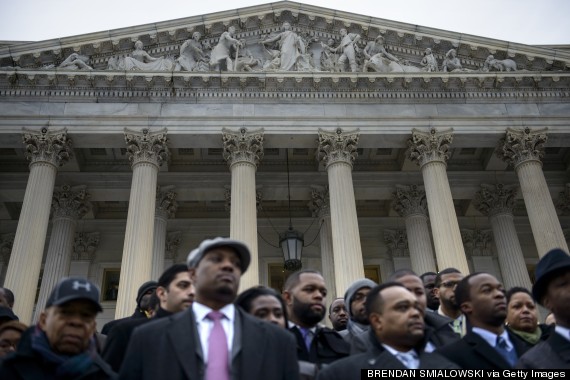 Rep. Joaquín Castro (D-Texas), who took part in the demonstration, told The Huffington Post that the protest represented "the best of American democracy." He said he hoped the effort had bipartisan support, and pointed out that a majority of Americans now support some reforms, like having body cameras on police, even in places "thought to be conservative," like Texas.

CORRECTION: An earlier version of this story cited a NPR report stating that Rep. John Lewis (D-Ga.) was in attendance. NPR later corrected the story, as Lewis was not at the event.