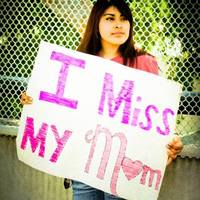 Cynthia Diaz, whose mom was deported after a home raid in 2011 and is now detained as she tried to return home.

Last year, I left my job as a Congressional staffer to focus on stopping my mother's deportation. As I walked the halls of Congress looking for support for my mother, I ran into top ranking Democratic Latino leader, Xavier Becerra. My mother asked Congressman Becerra for help and to sign a letter asking Immigration and Customs Enforcement not to deport her. His answer shocked me. Avoiding my mom's question, he turned and looked me in the eyes, "You need to leave the President alone on deportations." He turned to my mother, and in Spanish told her that what she needed was a path to citizenship so that one day she can become a voter and vote for the "right party." My mother responded that she wasn't concerned about voting at this point, she just wanted to be able to stay with her children. That was her immediate priority as a mother.

The conversation got more heated as I challenged the Congressmen. My mom was standing in front of him asking to stay with her kids, and he was talking about elections.

Mr. Becerra said that we would have to wait for a Democratic Congress to pass immigration reform. As if we didn't know that in 2010 Democrats had complete power in both chambers of congress and the Presidency, and we couldn't even pass the DREAM Act. His comment really got to me and I quickly replied, "Well I hope we don't have two million more deportations by the time that happens." He calmly replied, "We probably will." His words have haunted me since that day.

Mr. Becerra, two million more deportations is not okay. Using the lives of millions of undocumented immigrants for political gain is wrong. Following the President's strategy to detain and deport more innocent human beings is wrong. Holding influence and power as a Latino, yet not caring about people like my mother is wrong.

A couple of weeks ago, Congressman Becerra had the opportunity to meet with President Obama to talk specifically about deportations. What a disappointment that he decided to come out of that meeting blaming Republicans for inaction on comprehensive immigration reform. Instead of taking the opportunity to stand for something, he chose politics.

Electing Democrats to Congress with the belief that this will lead to winning immigration reform has been the strategy of many D.C. mainstream advocacy organizations for the past decade. Their strategy now is to blame Republicans for the failure of immigration reform, with the hopes of electing Democrats in the next election. This is not to say that Republicans should not be held accountable for carrying most of the blame for killing CIR, but the greater need is to end the pain that the Obama administration is inflicting on the immigrant community right now. We expect Democratic Congressmen to fight for actual policy changes that will stop the deportations, not merely blaming Republicans for inaction.

Now Pelosi's and Becerra's new strategy to "pass" immigration reform is to launch a discharge petition to get their bill, HR 15, on the floor. Unfortunately, there is no way that Democrats in the House of Representatives are going to get 17 Republicans to sign a petition to put CIR on the floor; and anyone who is saying that it is possible, knows that they are lying to our communities. This is all a political maneuver to take pressure away from Obama and use CIR to get Latinos to elect more Democrats in congress. Which would be fine if they were not dealing with real lives and real people, but reality is, we are not just a political issue to use for the next election, we are human beings who need relief.

My mother was allowed to stay in the country for another year, but people like my friend Ardany, my friend Jaime and 1,100 other human beings continue to be deported every day by the current administration. This is a not merely a number, but mothers, fathers, brothers and sisters. They are families just like mine. Congressman Becerra, the Congressional Hispanic Caucus and the Democratic Party should show leadership and demand the President stop deporting the same people that they are trying to legalize. The Latino community needs leaders, not politicians.