This week, Cruelty Free International presented Congressman Jim Moran (D-VA) with the Lord Houghton Award in recognition of his service and contribution to animal welfare.

Those in the United States may not be familiar with Lord Houghton or why the award that bears his name is so befitting to honor Congressman Moran, so let me elucidate here.

Lord Houghton (1898 - 1996) was a British Labor party politician and the last veteran of the First World War to serve in the Cabinet and both Houses of the British Parliament. He believed in equality of opportunity for all people and is well known for challenging the iniquities of the rigid British class system of the 1930's.

He was also a passionate animal welfare advocate, actively campaigning for changes in legislation to bring about improvements in the treatment of animals. He strongly believed that like other social movements, the animal welfare movement, in order to be successful, must lead to changes in the law. Indeed, in a speech given at a "Rights of Animals Symposium" at Trinity College in Cambridge in 1976, he stated,

Lord Houghton actively fought for animal welfare reforms well into his nineties and is credited with helping to firmly establish animal welfare as a political and legal issue.

In 1980, as a lasting recognition of his contribution to the animal welfare movement, the Lord Houghton Award was initiated. The award, in the shape of a glass bowl, is engraved with Lord Houghton's coat of arms which depicts two badgers as armorial supporters and a barn owl as a center-piece - a reflection of his enduring interest in animal welfare. It is presented once a year for outstanding service to animal welfare.

Nomination of the recipient for the Lord Houghton Award rotates annually between four of Europe's leading animal protection groups, each group nominating in rotation. This year's turn belonged to the BUAV (sister organization of Cruelty Free International). Congressman Moran was the perfect choice for this year's award.

This year, Congressman Moran is retiring after more than two decades in the US Congress where he has been one of the foremost advocates for animal protection issues. During his service he has led multiple congressional efforts to improve the lives of animals through sponsorship of many key bills and has served as the co-chair of the Congressional Animal Protection Caucus which has helped enact bans on animal fighting, horse slaughter, animal abuse videos and the sale of cat and dog fur.

Earlier this year Cruelty Free International applauded Moran's introduction of the Humane Cosmetics Act H.R. 4148 - a bill that would ban animal testing for cosmetics after a 1 year phase in and follow with a 3 year phase in period for a ban on the sale of any animal tested cosmetics. Shortly after the introduction of the bill, on the first anniversary of the EU ban, Cruelty Free International and Moran hosted a Congressional briefing to effectively launch a roadmap for the U.S. to test cosmetics without using animals.

"We are honored to present Jim Moran with the Lord Houghton Award. He has been a great advocate for animals during his time in Congress, working to ensure that animal protection issues have a place in politics."

"I am immensely honored to be added to the distinguished list of individuals who have received the Lord Houghton Award. I have always believed that humans have a moral obligation to treat animals with respect, prevent wanton cruelty, and provide living conditions that allow animals to lead full and healthy lives. During my time in Congress, it has been a privilege to work side-by-side with dedicated organizations like Cruelty Free International to enact laws that codify these values." 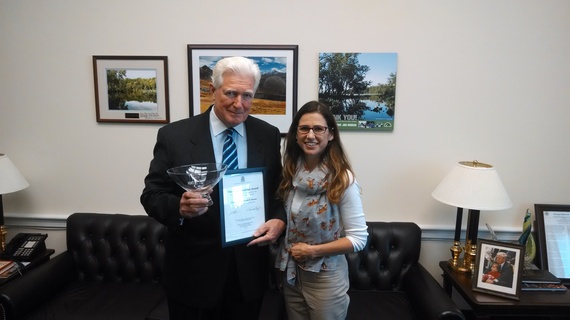 This is the first time that the Lord Houghton award has been presented to a U.S. politician. However he is not the first politician or the first American to receive the award. Past award recipients include British Members of Parliament, Caroline Lucas MP and Tony Banks- Lord Stratford and U.S-born celebrities Linda McCartney and Bob Barker; leaving Congressman Moran in very good company. And, with his retirement from Congress, Jim Moran leaves behind a great legacy for the animals and some very big shoes to fill.