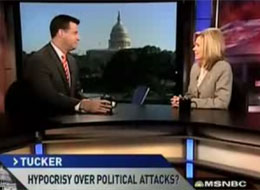 Staff for Rep. Marsha Blackburn (R-TN), who could not name the last soldier from her district killed in Iraq during an appearance on MSNBC, acknowledged they sought a retraction from the network after the incident occurred.

"We spoke to them about the inaccuracy in the confrontation," said Matt Lambert, Blackburn's Communications Director, in a Friday phone conversation with the Huffington Post. "They said after investigating the documents we sent them that we deserved a correction, and we were going to get it."

David Shuster challenged Blackburn to name the last soldier killed in the Iraq War from her district. After naming Private Jeremy S. Bohannon, many conservative media outlets slammed Shuster for broadcasting inaccurate information because Bohannon had actually been a constituent of Democratic Tennessee Rep. John Tanner.

In a statement, Blackburn also slammed Shuster for "interrupting" the "grieving process" of families of the fallen:

First, my heart goes out to the family of the soldier Shuster identified for the loss of their son, as well as this rude interruption of their grieving process by a callous young reporter. I think they deserve an apology from David Shuster more than anyone involved in this incident. Correcting his mistake was the least he could do.


In good faith, I accepted MSNBC's very specific request to discuss the politics surrounding the attack on General Petraeus in the New York Times -- not Rush Limbaugh, Chuck Hagel, or Iraq. Under no circumstances is it appropriate for a Member of Congress to interject private citizens into a public debate without their consent. This incident puts Schuster's journalistic judgment and credibility into question and I hope that MSNBC takes appropriate steps to ensure that something like this doesn't happen in the future. Finally, I would highlight that it is not the place for Members of Congress to publicize casualties.


Being asked to report to the viewership of Tucker Carlson's program the name of latest lost soldier, marine or airman is flat wrong. The privacy of these families must be protected in accordance with their wishes and I have no greater responsibility as an elected official than to be an advocate for our military personnel and their families.

Although MSNBC did apologize to Blackburn on air, subsequent reporting from the Tennessee Commercial Appeal showed that Bohannon had declared Bon Aqua, TN as his legal residence before enlisting. While the town of Bon Aqua falls within Blackburn's district and two additional districts, it appears that he was not based in his hometown of McEwan, which falls squarely in Rep. Tanner's district. Census records further showed Bohannon's address as falling within Blackburn's district, the paper reported.

Blackburn's spokesman questioned the veracity of the report.

Lambert said he could not produce the document he referred to out of respect for the family.

Update: Randy Ford, Spokesman for Rep. Tanner, confirmed to the Huffington Post that the Congressman was notified by the Department of Defense when Private Bohannon was killed.

Note: This story was corrected to reflect the fact that Bon Aqua, TN, falls across multiple districts, including Blackburn's.