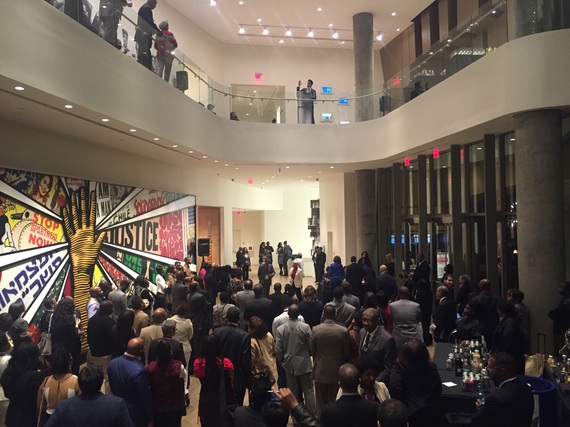 I recently gave a keynote speech entitled "Connect More Deeply" at the Hope Global Forum in Atlanta, Georgia hosted by a non-profit called Operation Hope. U.S Secretary of Treasury Jack Lew, Chelsea Clinton and Andrew Young, one of Dr. Martin Luther King's, Jr.'s lieutenants in the civil rights movement, were a few of the esteemed speakers.

Though I've given over 1,000 speeches or workshops in my speaking career, this speech was different. The visceral response caught me off guard. I had a woman literally apologize to me after my speech because she felt some of her colleagues were disrespecting me because they weren't fully listening to my message. I've attached my edited speech transcript here. May it help you connect more deeply with one person today. You are not alone.

----
We all attend conferences for different reasons. Some of us come to hear the headlining speakers. Others perhaps want to get away for a few days. Most of us, however, want to connect with someone you want to learn from, work with or work for. Tonight I'm going to share three things we can all do to connect more deeply with each other.

Before I share these three things, I first want to address the two main reasons why we don't connect more deeply. It's because we are over-stimulated and hyper-connected. The culprit, the reason, the cause is this magical device called a smartphone.

How many of us have this morning routine?
Before we can even step out of our bed or even open both eyes, we roll over to the side, pick up our smartphones and begin checking our text messages, emails, tweets and Facebook likes and comments. All throughout our day, from when we leave our home, to when we go to work, then lunch, then back to work, and finally back home, we are constantly checking our smartphones all throughout the day.

Human beings connect more deeply by sharing stories with each other.
That's the first lesson I'm going to share with you.

Lesson 1: Share Your Story
Learn how to share your story in a powerful, passionate and poignant way. Perhaps the most inspiring story of all time is Dr. Martin Luther King, Jr. He left such an indelible mark on my life that I named my company KGL after him and two other visionaries. KGL stands for King, Gandhi, and Bruce Lee. I hold their ideals up every day to remind myself of what to strive toward with my clients, colleagues, and everyone I meet.

The reason why his story is inspiring is because we can see our own story in his life.

The first time I ever visited Atlanta was in April of 2000. I didn't know at the time that Atlanta is where Dr. King was born. I had a chance to visit his home on Auburn Avenue, walked over to Ebenezer Baptist Church where he was a pastor, and finally ended up at The King Center where his tomb rests on top of a stone island in this beautiful reflection pool.

As I stood there in front of Dr. King's tomb, I read his epitaph, "Rev. Martin Luther King, Jr. 1929 - 1968 'Free at last. Free at last. Thank God Almighty I'm Free at last.'" I felt such a deep connection at that moment because just six weeks prior I had quit my day job at American Express where I worked at 40 Wall Street. I had put my apartment up for sale and I was leaving my family and friends behind in New York City to move to California where like Dr. King, I too had a dream. I wanted to be a published author, speaker, entrepreneur and singer-songwriter. I had so much fear and doubt and insecurity. I was so afraid but, somehow, standing in front of Dr. King's presence gave me such strength, conviction and power. I was determined to succeed.

On May 6, 2000, I got on a plane and flew to San Francisco. Nine months later, I had finished and published my first book, a college success guide. A year later, I moved down to Los Angeles to be a singer-songwriter while simultaneously building my business as a speaker and consultant.

Eight years later in 2008, I had a chance to come back to the South but this time to Tennessee. I knew that Dr. King met his physical demise in Memphis, Tennessee. So though I was in Nashville, Tennessee co-writing a song, I decided to drive the 218 miles by myself to see The King. I wasn't going to visit Elvis Presley's Graceland, I was going to visit the Lorraine Motel where Dr. King met his physical demise and I also wanted to visit the Charles Mason Temple Church where Dr. King gave his last speech entitled "I've been to the Mountaintop" the day before he passed away.

When I arrived at the church at 2:30pm in the afternoon, the parking lot was not only closed, but it was gated shut, with a chain and pad lot, including a security guard sitting in her car inside the parking lot. I walked up to the gate and called out to the security guard. "Hi, I'm out of town and I just drove three hours to get here. Is this the church where Dr. King gave his last speech before he died?" The security guard looked confused and uncertain. So she took out her phone and called someone to ask. Moments later she said, "Sorry, this isn't the church."

I couldn't believe her words. I'm almost positive I had researched the right church and since I had just driven 218 miles to see this church I was perplexed.

I had found the right place. The security guard just didn't know.

In 2000, I had a dream and I stood at Dr. King's tombstone not knowing how my path would turn out. Then by 2008, I was living my dream when I visited Memphis, Tennessee and when I sat in the sanctuary at the Charles Mason Temple Church I had a chance to thank and connect with Dr. King again.

Now eight years later, 16 years after coming here for the first time, I am here speaking to you all. Dreams are possible. Dreams are real. You CAN live your dreams.

The first lesson to connect more deeply is to share your personal and professional story.

Lesson 2: Listen More Deeply
The second lesson I want to share is about listening. The Chinese have a beautiful language. The Chinese character for listen has five distinct parts. On the left hand side, it's the character for ears. But on the right hand side, it's broken up into four characters which individually mean "you", "eyes", "one", and "heart." When you listen, you should be focusing on one person and you aren't just listening with your ears. You're also listening with your eyes but most importantly with your heart.

Listen with your heart.

Why do we as a people focus on our differences and expect us to get along? I just flew into Atlanta a few hours ago after attending an event at the White House. Sitting next to me during my flight was a woman named Carrell. If I focused on our differences there would be many: Carrell was white and I am Asian. Carrell is from the South and I live in California. Carrell is a woman and I am a man. Carrell is a retired psychologist and has been married three times. I am still working and have never been married.

Instead of focusing on all these differences, we shared so much in common. We both loved to travel, help people, and share stories. She spoke about her trip to Italy last year and I mentioned how I was flying to Atlanta to give a keynote speech. We had such a great conversation because even though we had so many seemingly outward differences, we chose to focus on our common denominators.

I want to end with one final story. When I attended the Clinton Global Initiative Annual Meeting last year in New York, former President Bill Clinton had a closing plenary session where he interviewed a NASA astronaut named Cady Coleman while simultaneously Skype calling two astronauts - one American and one Russian - on the International Space Station. When President Clinton asked Coleman about her experience in space, she simply said, "In space, when you're looking down there are no countries. It's one place and we're all from there."

Finally, please turn this off more [holding up my smartphone] throughout the day.
Thank you.
___
Christopher Kai is founder and CEO of KGL, a strategic-consulting firm that helps c-level executives and sales professionals with personal branding, disruptive marketing, and business development strategies. He is a corporate speaker, consultant, and author. His latest book is entitled "Big Game Hunting: Networking with Billionaires, Executives and Celebrities."
You may contact him directly at: chris@christopherkai.com or visit his website at: christopherkai.com

Founder & CEO of The Mathem Group