It cannot be overstated how hard the Haitian people -- and their infrastructure -- have been hit by the recent earthquake.After suffering cumulative damage from non-stop hurricanes over the last three years -- beginning with Hurricane Jeanne that destroyed Gonaives -- their suffering has been unimaginable.

The damage seems to be equal to that of the 2004 Tsunami, which I witnessed in both Indonesia and Sri Lanka. But unlike the Tsunami, where the world watched and waited, it seems as if international attention on Haiti's tragedy has lost its focus. Many NGOs and militias have already left, but some good people remain -- and reinforcements are arriving.

Sherry Sterling, R.N., the founder and C.E.O. of International Medical Angels Network, based in Houston, detailed to me the human situation on the ground:

The entire island of Haiti has been devastated with most of the country very hard hit from the 7.0 earthquake which left multitudes of crush injuries, amputees, and the already stressed health care system in shambles. 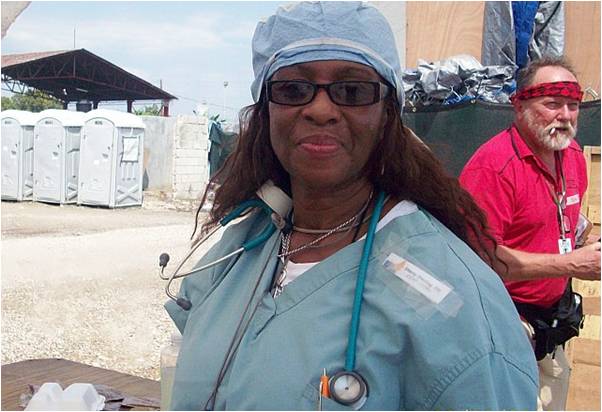 As founder of Orphans International Worldwide (OIWW), I saw after the Tsunami how necessary good communications are for disaster relief. And how important sustained global aid was.

As I prepare to lead our own post-disaster relief team of OIWW and other NGO volunteers down to Port-au-Prince in a few days, I am talking to as many people on the ground there as I can. I have had extensive conversations with Dr. Tiffany Keenan, who was on the ground immediately after the quake, and a former Orphans International Worldwide Officer who now administers a pediatric hospital in Port-au-Prince, Phadoul Amisial. Having been to Haiti 19 times over the last decade -- including in Gonaives after Hurricane Jeanne -- I know that Haitian communications and medical services were sporadic before the earthquake and disastrous now.

One American is out to change that. Mr. Brian Steckler of the U.S. Naval Postgraduate School (NPS) in Monterey California heads up their "Hastily Formed Networks" Center that focuses on rapidly deployed wireless communications for Humanitarian Assistance/Disaster Relief. He and his team from NPS's HFN Center arrived in Haiti within days of the earthquake, and all together he spent close to two months in the country.

Brian was joined in Haiti part of the time by others from NPS including Research Assistant and Lab Manager Ramsey Meyer, U.S.M.C. graduate students, Capt's Bobby Gruber and Brandon Newell, two civilian NPS masters students (Ms. Rosa Albari and Mr. Foard Copeland) and fellow NPS faculty member Dave Nystrom. Brian has since returned twice to continue his work, primarily focusing the second go-round on helping improve interoperability and cooperation with the Non-Government Organization (NGO) community, something his Pentagon sponsors have had him focus on a lot on the past five years.

During his initial 30-day deployment to Haiti, he was sent on behalf of the U.S. Navy to facilitate communications between a number of various government, U.N. and military groups in Haiti using a mix of NPS HFN Lab gear and donated networking equipment. As the search and rescue phase of the disaster was wrapping up, he began to work on ways to connect the hospitals and refugee camps for IDPs (Internally Displaced Persons) or tent cities as they have come to be known in Haiti. Brian laid out for me the communications-related challenges for disaster relief workers in Haiti since the earthquake:

The field recovery workers had to try to do their jobs under extreme stress with non-existing or interment communications. Many of the casualties succumbed to injuries that could have been treatable if only they had a better means to coordinate activities, to confer with other medical professionals, or to access online medical databases and telemedicine capabilities.

On more than one occasion, their team was able to save lives through the use of communications. On one evening ashore while assigned to the U.S.N.S. Comfort, they found ourselves at the Haitian Community Hospital in Petionville, a large community in the hills above Port-au-Prince. The doctor in charge told t that he had been trying unsuccessfully to reach the U.S.N.S. Comfort to arrange for the air evacuation of a critically injured victim of the earthquake.

The doctor made it perfectly clear that if this patient could not obtain the level of care only available on the Comfort, he would die. Unfortunately, the hospital had no data network connectivity, and had only a few barely functioning cellular phones. Thanks to a simple satellite phone that they carried, fellow NPS faculty member Dave Nystrom was able to speak directly with the senior commander on the Comfort and arrange for the dispatch of a CH-60 helicopter to the landing zone near the U.S. Embassy.

The patient was transported in their SUV, using their driver/translator, to the landing zone in heavy traffic and in the dark, before being flown, out. The patient survived and is doing well now. Effective communications infrastructure saves lives, as this case illustrates.

Unreliable and diminished communications in an emergency environment is as much a killer as the catastrophe itself. Relief workers, medical personnel, and engaged citizens in Haiti have had their recovery efforts stifled due to failed or inoperable communications links. Additional road blocks of poor power and lack of trained information technology (I.T.) professionals have made a bad situation worse. Although the focus now is on Haiti, this scenario is the norm for emerging nations when disaster strikes.

After completing his initial work to establish communications systems for various organizations, including providing wireless (WiFi) coverage of the Port-au-Prince main port and pier area with high end Cisco equipment allowing all workers to finally connect to the Internet, Brian and his NPS team decided not to accept the status quo.

Working closely with volunteer team members such as Glen Berndt and Steve Birnbaum who are Subject Matter Experts in various areas of the communications technology world and took time from their jobs to come down and assist, as well as local Haitians from the Internet and telecommunications industries, they began to work on solutions that may reshape how telecommunications can be deployed in crisis conditions.

This tremendous undertaking is being coordinated across institutions supporting real-time collaboration in a text, voice, and video-rich environment. All these capabilities are now accessible to major hospitals, field hospitals, indigenous displaced persons (IDP/refugee) camps, and tent-city camps -- with plans to spread these communications systems out to temporary and/or permanent school-houses and tent based classrooms now being erected in some of the larger tent cities.

The rollout pilot project, called "Using Information and Communications Technology as an Enabler for Health, Shelter, and Education infrastructures in Haiti," is focusing first on getting a number of local permanent hospitals and IDP camps using primarily donated equipment such as Redline, Airaya, and Cisco wireless communications gear.

The main feature of the project, besides the connectivity infrastructure design, is the applications that reside atop the network that allow healthcare practitioners and other responders to get access to medical information logistical support and personnel coordination.

The response to the NPS led project has been quite positive both on the ground in Haiti and in the international disaster responder community.

Brian and his team have briefed various U.S. Government organizations, the U.S. military's Joint Task Force-Haiti, the U.N.'s Emergency Telecommunications Cluster, the Haitian Government's Director General of CONATEL -- their equivalent of the U.S. Federal Communications Commission (FCC), the Haiti Secretary General, and other key Haitian businesses involved in Internet and communications throughout this earthquake-devastated country.

In fact, volunteer Steve Birnbaum arranged for and hosted the first inter-agency frequency coordination meeting in this Haiti earthquake disaster response event. Participants included all of the above organizations as well as the FC) and the U.N.'s MINUSTAH Haiti peacekeeping force, who came together to meet and ensure that they complied with the Haitian Government's frequency regulations and did not interfere with local businesses or with each other's radio systems.

The precedent-setting meeting received considerable exposure throughout the Haitian and U.S. governments and is being credited with significantly reducing show-stopping radio frequency interference issues around the country.

Both Brian and Steve noted that implementing a technical solution alone, however, is an incomplete response to emergencies in impoverished nations. The follow-through of any such project will include ensuring that Haitians are ultimately responsible for the operation and management of this new network after having received any necessary training. This will bring jobs and professional I.T. training to the nation.

My own team flew down to Leogane, 18 miles west of Port-au-Prince, during this time. Our objective was to provide post-disaster family-care programming for orphaned children living with their extended families. In addition, we will be involved with our partner NGOs to provide education, health care, and clean water for these and other neighborhood children. 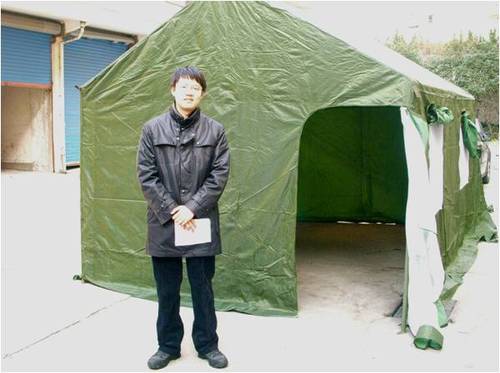 Truly global: the tents Orphans International Worldwide will use in Leogane, Haiti were
donated by a Chinese college student in Beijing who flew them personally to New York.

Our project will also have a communications center supported by CharityHelp International (CHI) and Skype.

There are many unsung heroes in Haiti today, Haitian and non-Haitian. Phadoul Amisial, Tiffany Keenan, M.D., Sherry Sterling, R.N. are among the many. Brian and all of the team from the Naval Postgraduate School and their ad hoc volunteer subject matter expert team members, too, are heroes.

Other Stories by Jim Luce

Dr. Judy on the Trauma of Disasters - like Haitian Earthquake (HuffPo)

As if They Were His Own: Former Toastmaster Finds Courage to Transform the World's Orphanages (Toastmasters)

CharityHelp: An Electronic Bridge to Kids in Need (HuffPo)