Over the last year, millions of people around the world have felt first-hand the impacts of the growing climate crisis. From devastating flooding in Thailand to historic drought in Texas, global warming has moved from an abstraction to a dangerous new reality. Here in the United States, 82 percent of Americans say that they've experienced a natural disaster or extreme weather event first-hand.

Yet, despite a few notable exceptions, the mainstream media has failed to connect the dots between this string of extreme weather events and global warming. Instead, coverage of climate change has dropped precipitously. A recent report by Media Matters for America found out that nightly news coverage on the major networks decreased 72 percent between 2009 and 2011. The Sunday shows, traditionally seen as forums for discussing the "important issues" of the day, have all spent more time covering Donald Trump than they have climate change.

If the mainstream media won't connect the dots, then it's up to the rest of us to try. This Saturday, 350.org's global network of volunteers, activists, and organizations are hosting over 1,000 events in more than 100 countries to "connect the dots" between extreme weather and climate change.

Firefighters in New Mexico will hold posters with dots in a forest ravaged by wildfires, while divers in the Marshall Islands take a dot underwater to their dying coral reefs. On glaciers in the Alps, Andes, and Sierras, climbers will unfurl dots on melting glaciers with the simple message: "I'm Melting." Villagers in Northeastern Kenya will create dots to show how ongoing drought is killing their crops, while city-dwellers in Rio de Janeiro hold dots where mudslides from unusually heavy rains wiped out part of their neighborhood. The list goes on. 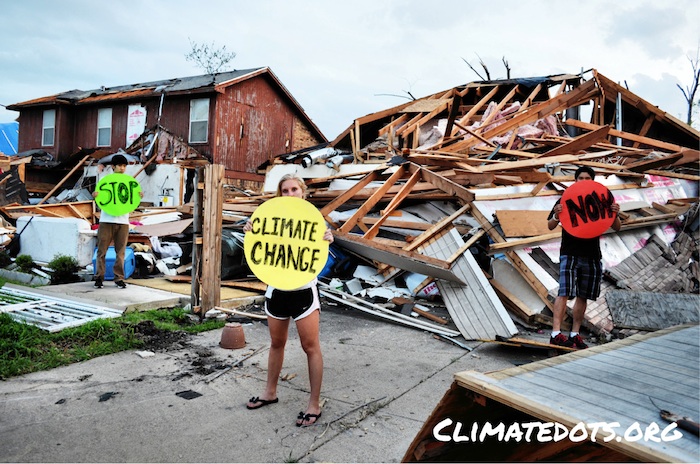 Here at 350 HQ, we'll be doing our best to collect photos and videos from the events, edit them together into slideshows and b-roll in record time, get them moving across social media, and push content out to mainstream news networks. If we're successful, Saturday will be another big step forward in waking the world up to the urgent threat of the climate crisis.

It's this type of online-to-offline, new-to-traditional media mash-up that I think holds some promise for those of us who are struggling to move climate change from a low public priority to a top-tier political concern. We'll never have the big advertising budgets of the fossil fuel industry, but we can assemble enough cell-phone cameras, Flickr feeds, and YouTube videos to show people how climate change is a clear and present danger rather than some nuisance for the future.

Over the last few years coordinating our communications here at 350.org, I've seen how citizen-powered journalism can help push the mainstream media to cover the climate crisis. The day before our first global day of action in 2009, we got a skype call from our organizers in Ethiopia who told us that they were about to have a march with 15,000 school children in the streets of Addis Ababa to call for action on climate change, but that they didn't have anyone to film the demonstration and that there weren't any international media outlets with cameras in the city. A few Skype calls later, my colleague Adam tracked down a friend of a friend of a friend who happened to be in Addis with a camera. She quickly hopped on her bicycle, filmed the rally, found high-speed Internet at a hotel bar (ordered a drink so she could use it for free), uploaded the footage to us in New York, we cut it into b-roll in iMovie, sent it over to CNN, and they put it on the air a few hours later.

In 2010, we turned to artists like Thom Yorke and Jorge Rodriguez-Gerada to help get the message across. They designed images large enough to be photographed by satellite and we brought together thousands of people to form the pictures on the ground. Imagine the logistics involved in organizing hundreds of people to form a "human river" in the desert outside Santa Fe while timing the whole thing to coincide with a satellite flying overhead at over 100 mph -- then times that by 12 different events across the planet. The art worked: outlets around the world picked up the pictures and ran with them. 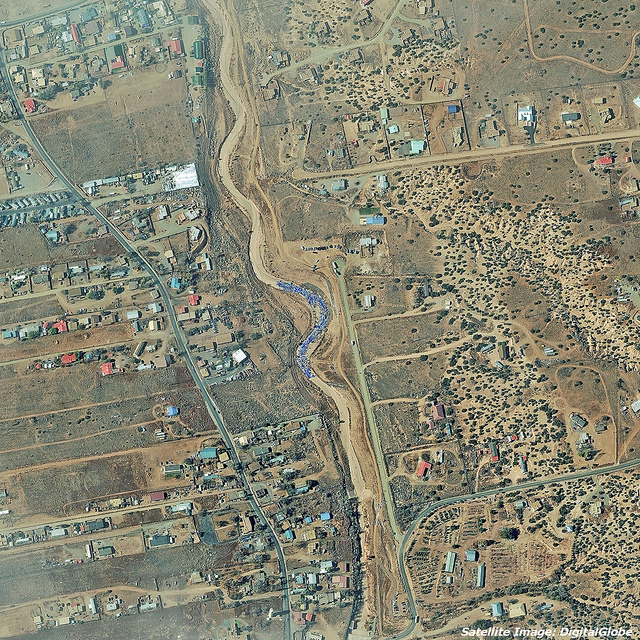 Last August, during the White House sit-ins against the Keystone XL pipeline, we only began to get media coverage after days of our own photographers and videographers cranking out photos and videos of everyday citizens being led away in handcuffs. Now, hardly a day goes by without an article about the pipeline and the latest political ploy to revive that zombie.

This Saturday will be a unique challenge. It's been just over a month since we sent out the invitation for Climate Impacts Day. We're still finding typos and glitches on the website, scrambling to get together updated press lists, and find enough hours in the day to coordinate more than 1,000 events spanning nearly every continent (still working on an Antarctic action). But all across the world people have picked up the theme and are organizing with incredible creativity. As it turns out, in many places around the world, people already deeply understand between the floods that wiped out their village or the drought that killed their crop and the pollution that the fossil fuel industry is spewing out day after day.

They've connected the dots. We'll see if the mainstream media can too.