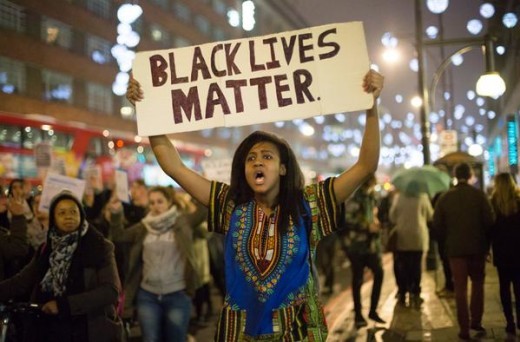 Some might say that current backlash over this year's Oscar nominations has little correlation to the Black Lives Matter movement. After all, how can million-dollar celebrities debating over a bald, golden statue possibly relate to the brutal deaths of black people across the country? Nevertheless, the debate over the Oscars, and the overarching debate over diversity in Hollywood, is vital, not just because it will give more black actors and actresses a trophy to hold or a film to promote, but because it will give less black parents a funeral to plan.

The arrests that are advocated for in the Black Lives Matter movement often consist of a common theme: the subordination of a black person at the hands of a police officer, which results in an unnecessary shooting or mishandling. However, this subordination is not new, given that numerous portrayals of blacks in film have purported a similar image. Lupita Nyong'o played slave Patsey in 12 Years A Slave (2013). Octavia Spencer played Minny Jackson, a maid to a prominent white family, in The Help (2011). Also, Gabourey Sidibe played an abused daughter in Precious (2009). This subordination is not only apparent in roles, but in pay as well. In her latest podcast, Mo'Nique, who played Mary in Precious, discussed the lack of actresses and actors of color claiming hefty paychecks - even after winning an Oscar. The stories told by these roles should not go unacknowledged. The struggles these characters face are real and the film industry is right to show them as such. Nevertheless, the stories of subordinate blacks are not the only stories that should be told. If blacks are portrayed in a predominantly subservient manner in film, it is only inevitable that we will continue to be seen as subordinate, and continue to be criminalized, in real life.

One can easily say that white actresses and actors have had their fair share of touchy portrayals in film and television. Whites have had portrayals ranging from school shooters, such as that played by Spencer MacPherson on the Degrassi: Next Class episode,"#SorryNotSorry", to slave owners, as played by Michael Fassbender in 12 Years A Slave. Nevertheless, they are also portrayed as ambitious astronauts (The Martian), financial connoisseurs (The Big Short), devoted journalists (Spotlight), and so on. Black portrayals deserve this same versatility. Law enforcement approached gun-wielding activists in Oregon with patience and consideration, an approach that could've easily been the result of heroic portrayals of armed whites in western films. Meanwhile, blacks have been approached with hasty violence, even when unarmed. Until blacks are heralded for both their struggle and their strength, police officers will continue to use their strength against us.

When debates like this arise, it's easy to ask, what's the point? Why are we, as a society, so "hypersensitive" and obsessed with race? Still, we must remember the basic fact: unarmed black women and men are dying, and people are not being held accountable. It's up to those of us creating, critiquing and viewing these films to remember that black lives don't just matter after they are gone.