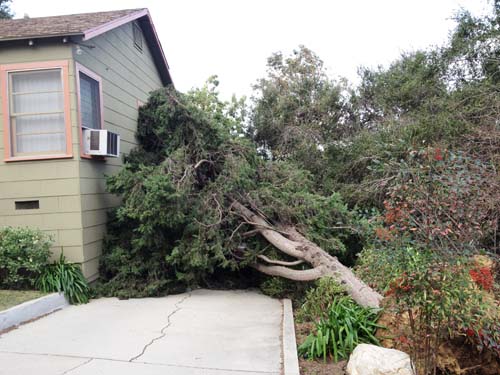 My family happens to live close to Pasadena, where, as shown in the news, we recently experienced great winds. Our neighbor lost a tree -- right onto his car and house. Another tree partially blocks our street. The drive alone to the nearby Art Center College of Design, where I teach just above the Rose Bowl, brought another dozen trees fallen into the streets and a challenge to get around three of them. The effort proved futile. The college was closed due to a lack of electricity.

We, too, had no electricity. In fact, the whole area, miles in each direction, was without the juice. My wife Ann works as the librarian at a nearby high school -- closed due to a lot of windows blown out and no electricity. The two days without energy showed us a few things.

At first, it felt like camping -- no particular hardship. While our gas stove didn't have its electric starter, matches worked. Our gas fireplace put out heat nicely. (Yes, L.A. gets cold -- not below zero, but at night this week, it's in the low 40s and high 30s.)

When it came to the refrigerator, I insisted that none of us open it or the freezer. It's just physics. The insulation would keep our food cool if we didn't open the doors even once. That left us food in cans and jars.

Ann dashed to the local Vons grocery store to get some bread for the peanut butter. She found that although the store had a few emergency generators, it wasn't enough, because clerks were already throwing out premade sandwiches and other food that had spent a night without electricity. The store was only taking cash, because its connections to banking services didn't work. Ann had no cash.

The same was true at the McDonald's across the street, which also had a generator and a long line of people out the door. Cash only. OK, so we made do with canned fruit -- no big deal, just like camping. Bartlett pears were good for Bartlett, so why not us?

That night, I had already made plans to meet long-lost friends in San Diego for a concert, and I invited Ann. She didn't relish the idea of driving two hours each way just to meet people she didn't know and to hear a guitarist she'd never heard of.

"I'll figure it out. This will give me a chance to relax."

I found out later that "relaxing" meant she, the cats, and the dogs circled the fireplace, and Ann became scared out of her head watching Alien on her iPad. She stopped only when the dogs started barking and she swore she heard the sound of a creature sloshing in the garage.

OK then. When I returned at 2:00 a.m., driving into our area was eerie. With no street lights, no stop lights, no lights of any sort, the place was dark, as if abandoned, a planet that used to have oxygen. I stopped at what was normally a busy intersection, only to witness a single car speed through as if a lack of lights meant it was green the whole way for him. I had to be careful.

Driving up our street, there wasn't a sense of a single person or dog. Where were the coyotes or cats? I parked in our drive, realizing that with the streetlight out and no ambient light, I might not find the lock in the door. Heck, I might not find the door. It made me think about being blind and how I take lights and eyesight for granted.

I kept my car's headlights on and unlocked the door. Now in the dark, and I got in -- but the inside of the house was like my photography darkroom of yore. Nothing. I had a strange thought: what did the Vikings do with 17-hour nights and no light switches?

I pulled out my cell phone, whose light gave me enough to find the bedroom. Our room was cold, but Ann was sound asleep, and snuggling next to her was great. We kept each other warm.

One of our cats leapt on the bed, and it wanted under the covers. I let her in, and I noticed there in the ultradark that the cat's fur burst with green light as it went under. Static electricity.

Over the next two days we learned a few things.

We suddenly had time on our hands, time that wasn't filled in the usual way with work or our devices. During the day, reading and tending the yard were wonderful. Just being with each other was great. I can see why more babies are born because of blackouts.

I also had a greater understanding of an interview I'd read in the Los Angeles Times the week before, where columnist Patt Morrison spoke to Tiffany Schlain, who had created the Webby Awards 15 years ago. The awards highlight the best of the Internet. Schlain is also a filmmaker deep into technology, and yet she does something called a "technology Shabbat" with her family.

As Schlain explains, "Friday night, we unplug all of our technology. All the screens go off for 24 hours, and we're present with each other. I'll tell you, it's very profound for me to do it, and every week I feel like I get to reset my mind and be completely present with people. It's really wonderful. I definitely feel like disconnecting is going to be more and more valued."

She makes many great points. We've all experienced people ignoring the ones they're with to be connected to someone else electronically. People have to be told not to use their cell phones in a theater or at a funeral, and Schlain also finds it a generational thing. "No matter how much we're connecting in these new ways, nothing is going to replace the importance of a deep relationship. It requires attention and presence. That's not going to change."

The thought of not having technology every week chills me, actually, but the realization that we don't need our gizmos all the time is profound. Maybe we won't become abstinent from electronics for a full day a week, but perhaps nightly at dinner until bed would be good. Maybe there's an app for that.

(If you have electricity, you can read the whole, interesting interview with Tiffany Schlain by clicking here.)