In the spring I travelled to Barcelona for the GSM Association's World Congress, with 49,000 participants spread between mobile phone-related 1,300 vendors. I was not interested in asking about how many bytes or the latest stock prices. I wanted to ask the CEOs gathered there, What is your company doing to better humanity? The response overwhelmed me and I am working my way through a total of 50 stories on how Connectivity is bettering humanity. 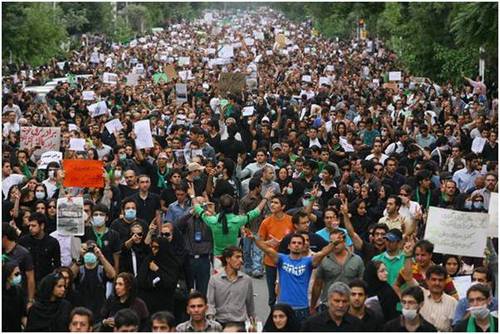 Political uprisings anywhere in the world today depend on cellular technology.

Twenty-five years ago I launched Fundamentalists Anonymous (FA) to combat extremism - the Fundamentalist Mindset - a view of the world in black-or-white, right-and-wrong, with no shades of gray. Today, we see extremism in the form of terrorism around the globe and the threat of extreme ideologies are more dangerous than ever before given the ubiquity of nuclear weaponry.

Ten years ago I formed a network of orphan care known as Orphans International Worldwide (OIWW) that has worked in Africa, Asia and the Americas to Raise Global Citizens. Connectivity allowed me to build the network, as I note on Skype's website.

Connectivity breeds goodness, not evil. Terrorists may use Connectivity to plan their activities or share videos of terror tactics, but Facebook, LinkedIn, and cell phone's mobile technologies are at the heart best able to transmit the positive, not the negative. 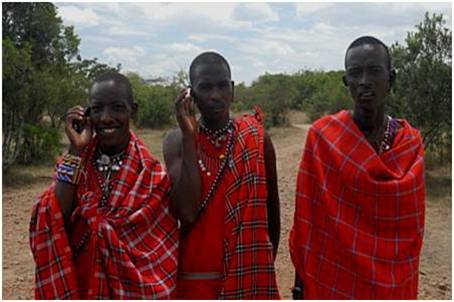 Since humanity began, we have had equal opportunities to act in ways Good or Evil. With the invention of the Gutenberg press, we began to evolve towards being better as a species.

Skype's former CEO, Josh Silverman, echoed this thought in a recent interview with me:

If you think about Information Technology, the written word was probably the first 'I.T.' and it allowed us to build upon the leanings of the past. To stop reinventing the wheel. As we've been able to access information from far-flung communities faster, we can innovate faster - because we are building upon each other's learnings.

Some idea that someone has in Stockholm is on the web immediately today - and some engineer in the Philippines has accessed it and is building some new technology on it.

I strongly believe that education and communications help us become what we are ordained to become - Good. The Connectivity that we are beginning to see around the world will assist us in furthering our evolutionary trajectory towards being better and away from being 'extremist.' For the most part, Josh agrees:

I guess it's hard to rank the best way to counter extremism. I think economic opportunity is important. Connectivity has got to be Top Three. I'm very passionate about communications, and so I'd love to say it's number one. I guess I'm not expert enough to be able to hard-rank it - but boy does it seem important. Understanding each other and bringing down resentment between cultures - even within cultures - having us be able to support each other, help each other, and understand each other. That's got to be one of the Top Three.

In brief, over the last 20 years, the Internet and cell phones which bridge the Digital Divide have reshaped our world through electronic ("e-") and mobile ("m-") applications or services. The mobile applications - mServices - that I am most excited about impact health, education, and finance. 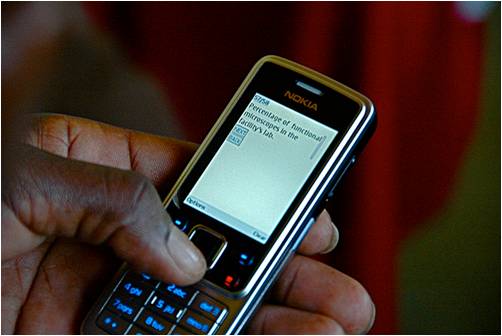 In Kenya health workers are using mHealth programs to track and contain outbreaks of disease, manage vaccine and medical supplies, and monitor childhood immunization campaigns, all on a device that fits in the palm of your hand (photo: DataDyne.org).

Many of the world's poor have access to mobile phones. From 2006-2009, the number of cell phone users in the developing world went from 1.5 billion to 2.2 billion, and future projections see a jump to over 3 billion within the next couple of years.

In 2009 it was noted by Money.com that in India alone, over five million new mobile phone customers sign up per week. We now have a global network of connectivity that is almost endless. It can be used for healthcare, for education, and of course for finance. More people today have cell phones than have radios - or even land lines. We are seeing mobile operators creating joint ventures throughout the developing world:

mHealth. The U.N. Millennium Development Goals (MDGs) set out clear and ambitious targets for reducing child and maternal mortality worldwide. But a growing shortage of healthcare workers and other economic and environmental trends have made elevation of life expectancy rates a challenge. The MDGs also call for dynamic public-private partnerships to help tackle obstacles to international development. Through new alliances and the widespread availability of mobile technologies, the field of mHealth has enormous potential to leverage health innovation and improve healthcare delivery worldwide. mHealth will allow healing where there existed only pain and suffering.

mEducation. Long distance learning is playing an increasingly vital role in allowing students to learn. In post-earthquake Haiti, for example, the teachers of Leogane have 'fled, bled, or are dead.' Supervised mEducation may be the best way to move the thousands of students left behind through high school and into college.

mFinance. People are paying bills, sending money - or even air time - over their cell phones. It is simply more convenient that the old ways. The majority of people in the developing world are 'unbanked.' Mobile technology is empowering them - allowing them to control their own finances - giving them financial independence. 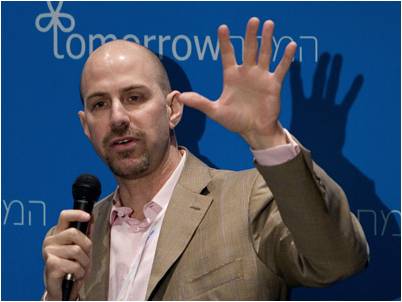 I asked Josh Silverman how Skype helps to better humanity? He told me:

Look, we give away free software that allows you to talk to anyone else on earth for free. Our business model is simple: We give away a product for free that doesn't cost us anything, we gain lots of new subscribers that way -and to them we have the opportunity to market really high-value, low-cost services. We can market products that are really cheap and deliver great value because we did not have to pay to acquire the customer and we don't have to pay to support the customer. We can pass along all of those savings to our customers, still make a fair margin on the products that we offer, and have it still be disruptively cheap -- calling to Europe for two cents a minute, for example.

The great thing is - and I think this is true for a lot of disruptive companies - we focus on putting great software out there that allows you to turn any computing devise into a communications devise. The innovation this has unleashed in every sector of the economy is perhaps almost as surprising to us as it is to you. Every day we get stories from different sectors of the economy and how they are using Skype - and it's super heartwarming for us. And we haven't had to do a lot of investment specifically for it.

Lots of educational institutions are using Skype now. They are using it for distance learning. So teachers can teach a class from far away. They are using it for students that are sick. I hear so many stories of a child who maybe has a blood cancer and needs to spend six months or a year in the hospital and can actually participate from her hospital bed in classes. And then bridging cultural divides.

I heard just the other day the story of a classroom in Harlem that does a video call with classroom in a favela in Rio -- so that these underprivileged communities can learn from each other and get exposed to the fact that there are other people facing similar challenges in other parts of the world. Those are just three examples that I've heard of recently. They are all happening without a lot of specific focus from us. We are now starting a "Skype for Educators" section of the website that is doing more to basically train people on how they can use the functionality that already exists in Skype in education.

I think we can look at healthcare and other sectors in the future, but our main focus is: How do we provide a base level of functionality with Skype that is powerful enough that people can use it and it will meet their needs in almost every circumstance?

I spend a lot of time in Washington, D.C. and in Brussels and the Middle East talking about why we think that a really open communication policy is very important to foster economic growth and civil rights and human rights.

Skype is really useful in particular as a synchronist communication method, so what Twitter is good at and Facebook is good is broadcast - one-to-many broadcast. What Skype is really good at is giving much richer information between people. We are seeing, for example, citizen journalism explode via Skype. Anyone with a webcam can go and report from the field. We are able to suddenly get much more accurate information about what's happening in real time without needing to send a satellite truck. We think that's a really helpful element - together with Twitter and Facebook - for situations like this.

Beginning in 1977, I travelled the world to connect to others in person. My grandmother, who had lived through both World Wars, assured me that the Germans and Japanese were intrinsically evil. My mother, who embraced Black Americans through her work in civil rights, gave me the mixed message that I should never marry a Latina. Growing up in Ohio, I had an a priori feeling that people were people. To prove this hypothesis, I was an exchange student to Germany, Japan - and Colombia. And discovered I was right.

Today, people connect electronically - over the Internet or mobile phone - making the world indeed much smaller. My story about Israelis and Palestinians playing mobile games together, and building friendships electronically, illustrates this. These are all vital steps towards world peace, where we no longer must allocate the time and resources to go physically to all corners of the earth - Facebook, Skype, our email takes us there.

After having written for Huffington Post and Daily Kos for years on Thought Leaders and Global Citizens, I branched out to create The Jim Luce Stewardship Report (JLSR) recently focused on Connecting Goodness. Because Connectivity allows for Goodness, and through Connectivity we become better people.

Connectivity is part of our natural evolution as human beings to become one world living in peace and harmony. It will not happen in our lifetimes, but it is a trajectory that will change the world for future generations.

Other Stories and Videos by/of Jim Luce on Connectivity:

Allure of the Hive: Experts on Connectivity, Social Networking and Social Change (HuffPo)

Connecting Disaster Relief Through Technology After Earthquake in Haiti (HuffPo)

The Impact of Cell Phones on Psychology, Community, Culture, Arts and Economics (HuffPo)

CharityHelp: An Electronic Bridge to Kids in Need (Stewardship Report)

More:
maasaiconnectivityhealthy livingHaitieconomic opportunity
Newsletter Sign Up
The Morning Email
Wake up to the day's most important news.
Successfully Subscribed!
Realness delivered to your inbox