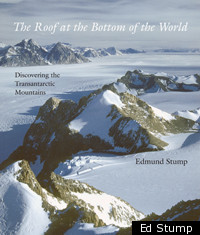 The following article is adapted from The Roof At The Bottom Of The World, Ed Stump's history and exploration of the Transantarctic Mountains, the most remote mountain belt on Earth. The illustrated book is the first authoritative look at this little known region.
---

I distinctly remember the first time I saw a picture of the Organ Pipe Peaks in a 1935 Geographical Review article by geologist Quin Blackburn, who had led a party of three to the headreaches of Scott Glacier in 1933. It was 1970 and I'd the good fortune to land a position on an Ohio State University geological research expedition in the Transantarctic Mountains. I was reading all of the old literature that I could get my hands on, but I struggled to believe that any grouping of summits could be so dramatic, so beautiful, and so fine.

They were a fantasy of mountains rendered with bold and simple strokes, faceted grandeur in black and white.

I dreamed of traveling to those peaks, bowing down before their central spire, The Spectre, and sampling a piece of the rock. Alas, the Organ Pipe Peaks remained beyond my reach that season.

Ten years later, on my fifth Antarctic expedition, I found myself camped on Sanctuary Glacier in the shadow of the Organ Pipe Peaks. My work that season had begun with geological mapping of the La Gorce Mountains and ended with a collecting traverse down the east side of Scott Glacier, essentially retracing Blackburn's route. Now I was one day away from attempting an ascent of The Spectre.

Being a klutz with ropes myself, I have always had someone in the party who is experienced with roped climbing in case we needed it. This time, the field assistant/mountaineer for the party was my brother Mugs, who ad made his first big mark in climbing the previous year by scaling the Emperor Face on Mount Robson in British Columbia. From the beginning of the field season, Mugs and I had joked about climbing The Spectre. We figured he would do all the leading and if necessary would winch me, the older brother, up on a rope.

Now that we were camped in the shadow of The Spectre, looking up its backside, the climb was no longer a joke. It was real, sheer, and daunting. Mugs studied the fractured upper wall of the spire, and, although he couldn't see a clear route, said: "We'll just wander around on the face and see where it leads."

I understood Mugs's nonchalance and trusted him completely. I also trusted myself. I must admit, however, that I didn't sleep well the night before the climb. What would it be like? Would the rough passages be vertical or overhung? Would I be in way over my head? I hadn't had such a case of butterflies since before wrestling matches in high school.

After a big breakfast Mugs and I snowmobiled over to the foot of The Spectre. We carried a minimal rack of climbing gear: a half-dozen carabineers, several slings, and four pitons to secure the rope. The first half of the ascent was a straightforward climb up a steep (50°) snow chute to a shoulder on the right skyline, with Mugs kicking in all the footsteps and I following in his prints.

At the shoulder, we pulled out the rope and while I belayed Mugs began working his way across and up the face, which in this stretch was pretty much vertical. When he reached secure spots, Mugs would set the belay for me, and I would follow up his path. There were good-sized cracks in the rock that gave plenty of handholds and places to rest, so I mostly managed to climb with no problem.

The most difficult passage of the climb -- the crux -- occurred at a place where there was a slight overhang. The only handholds were high above my head, but there was nowhere to place a toe if I pulled myself up. I thrashed around some as Mugs laughed and tightened the rope. But then I found a bulge on the rock out to my left side that could be grasped between my knees. From there I could reach the next handhold, and we were both past the touchiest part of the day.

After about two hundred feet of roped climbing (two pitches), we made it past the steepest stretch, and came out onto a rock face with a slope angle closer to 60° than to vertical and with lots of snow-filled cracks that made planting steps easy. Here Mugs packed the rope, and we continued upward across the face. We had started the day in full sun, climbing in shirt sleeves with our parkas packed, but as the sun circled its way to the south, we slipped into shade and the chill that it brings. Rather than take off our packs on the steep terrain, we decided not to pull out our parkas, and pushed on to the summit.

A small cornice of soft snow maybe eight feet high was the last barrier to the top. Mugs chopped and kicked his way through and over it, and we emerged into sunlight on the flat of the summit. In all directions splendid peaks reached for the heavens, piercing the undulating mantle of white and blue. No sound stirred the silence. We took a round of photos and then had some lunch.

You could say that we were pleased with ourselves. I can also say that we brothers never felt closer. Each of us knew that he wouldn't be at this spot were it not for the other. I had provided the opportunity and Mugs the expertise. What I recall most was agreeing with Mugs that our parents would be more than doubly proud. We lingered a bit longer and finally descended; I rappelled most of the distance down to the shoulder and Mugs mostly downclimbed after me, stripping the hardware from the belay points.

At the shoulder, we figured a glissade down the snow chute would be the fastest way back to the base of the mountain, so we sat back on our heels, set the points of our ice axes in the snow for braking, and slid all the way down to our snowmobile. My dream a decade earlier of bowing before The Spectre had been exceeded.