As Gwyneth Paltrow tried to express last year, divorce doesn't have to be a bad thing. And although she's sort of backtracked on the widely mocked concept of "conscious uncoupling," it serves as a useful introduction for a topic that's not near as likely to invade the public sphere as easily as her divorce from Coldplay frontman Chris Martin.

The basic idea of conscious uncoupling is to split up in a way that leaves the two parties on a better path, avoiding the acrimonious and bitter emotional turmoil that is generally associated with ending a relationship. Through introspection and communication, you work to make the break-up a positive experience.

So where are we going with this? Well, news broke this week that for the first time in its 40 years of record-keeping, the International Energy Association has announced that the global economy grew while carbon emissions didn't. In the wonky jargon, the separation of economic and emission growth is known as "decoupling." 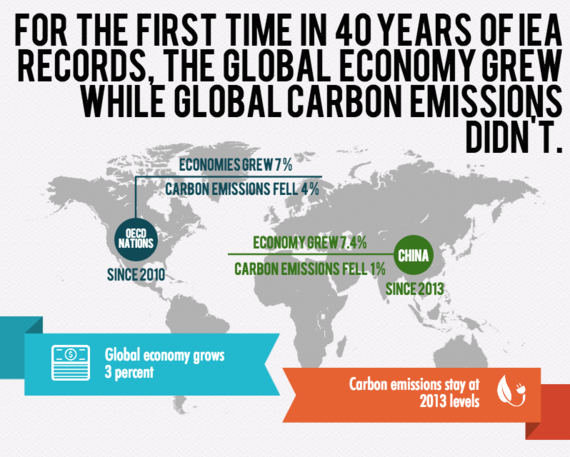 This divorce between emissions and economy is one of the most promising developments imaginable. For too long conventional wisdom decreed that the only way to reduce emissions would be to reduce economic development, but 2014 data shows that may no longer to be true. While the past 40 years have seen only three reductions of emissions, those have always been a result of an economic downturn instead of intentional efforts to reduce emissions.

But now, it seems that as a result of the policies that encourage renewables, increase energy efficiency and reduce consumption instituted by China, the U.S. and Europe, we're decoupling emissions and economic growth. This is an incredibly important development, as it suggests that the naysayers who claim addressing climate change means crashing the economy are flat wrong.

Instead, we see that a conscious decoupling is not just possible, but may already be underway.

Dedicated to highlighting the impacts of climate change