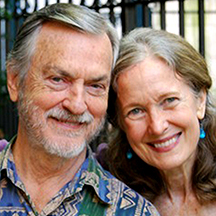 In this post, Harville Hendrix and Helen LaKelly Hunt discuss why couples fight and how to replace negativity in a relationship with curiosity.

Omega: How did you come to create Imago Relationship Therapy together? Did it happen because of your relationship or along with it?

Helen: On one of our first dates, Harville told me he wanted to write a book about why couples fight. He was exploring why couples who are drawn together and think they're in love end up being each other's worst enemies. We were both divorced, and I was mesmerized by the idea. The answer to this question is so important and significant for our well-being.

Harville: This was in 1977, and over the next couple of years I continued to do research and process my ideas with Helen. She has a background in psychology, so she was a great partner. I don't think there was ever a decision to "do this together," it just emerged out of our relationship. In 1979 we named it Imago Relationship Therapy, in 1982 we got married, and in 1988 Getting the Love You Want came out. Helen was busy working in the women's movement and stewarding our family when I was away, but she was always part of Imago. Sometimes I'm not sure who came up with an idea. I will think it's me and Helen will think it's her and then we can know it probably came up in a conversation.

Helen: I was very happy not being overtly involved, but I've always feel like a partner.

Harville: Yes, it would have never happened without Helen and our conversations.

Omega: So why do couples fight?

Harville: When two people meet and fall in love, they idealize each other. They see each other as the person who will meet their needs. At first it seems true -- people do all sorts of things they wouldn't normally do because they're trying to bond with someone, and we each end up with the impression that the other person is perfect and they're going to do all we want them to do. But once a commitment is made -- this often happens after a wedding -- there is a desire to reclaim ourselves, to find some differentiation from the merger that happened during courtship, and we begin to act more like our true self. For example, when we're dating, if you say vanilla is your favorite ice cream, I might eat vanilla ice cream, too, just to bond with you. But then we get married and you find out chocolate is really my favorite flavor and you wonder where the guy who liked vanilla went. It seems to you that I'm not the person you married, that I'm behaving differently or strangely, and you want that idealized person back, the one who was meeting all your needs.

Omega: Meanwhile, the same thing is happening with the other partner, right?

Harville: That's right. Both parties are feeling disillusioned and entitled. Both people are trying to recover themselves and neither person wants the other to do that. Couples realize at that point that true intimacy is harder than they thought it might be, and the fear of this is what makes them fight.

Omega: This is the moment, then, that there is an opportunity for a couple to have a conscious relationship?

Helen: Yes. First, both partners have to realize that they each have wounds from childhood and that one of the purposes of marriage is to finish those childhood issues. We didn't get our needs met by our original caretakers, and now is our chance to heal that. Second, it's important to realize that incompatibility is grounds for marriage. Most people believe if you're struggling in your marriage you're married to the wrong person. We are convinced that if there is struggle, growth is trying to happen and it's the perfect opportunity for a conscious relationship. At that point, both people need to move beyond the negativity and shift their focus from themselves to the space between. Couples experience a shift when they move from their own need for gratification and embrace the well being of their partner and the whole relationship. At that point a whole psycho-spiritual transformation begins to take place.

Omega: Imago has helped millions of people, but it also helped your relationship as well. How did you come to experience your own work?

Helen: We struggled a lot in our marriage, especially when the fame came. We probably would have limped along with a so-so marriage because neither of us is a perfectionist, but we realized there was a split between how others expected us to be and how we were at home.

Harville: You were great; it was me that was the problem.

Helen: Yes, I probably thought it was you but I had to learn it was me, too. So we used Imago therapy and through that process discovered another piece that transformed our relationship: We agreed to absolutely no negativity. It became the No. 1 rule. It's hard, but surprisingly transformative.

Omega: What if something seems negative to one person but not the other?

Helen: If your partner thinks it's negative, then it's negative. Harville and I were both raised in a culture that values critical thinking. We were both schooled to look at what's not there, to be critical. It was a good quality to have. But in a relationship it can destroy any sense of safety.

Harville: You can't have a great relationship unless it's emotionally safe; it has to be predictable and reliable. You need to be able to count on the fact that when you're around your partner you're not going to get hurt or be criticized, put down, or shut out. When we first agreed to no negativity we though we needed to replace it with positivity. But that didn't work. In the end, we replaced it with curiosity. If you're curious about the other then it becomes exciting to learn about them and their inner world and when they open up you are able to be empathetic and they feel safe. Safety is essential to being able to connect, and when you're connected you are joyful to be alive.

Omega: Helen, let's say Harville did something that really annoyed you. How do you deal with it if you don't want to be negative?

Helen: You use what we call in Imago "sender responsibility." You figure out how to communicate what you're feeling from your higher brain, from the highest degree of functioning, so there is a greater likelihood your partner will hear it. Use "I" language rather than "you." Be selective with how much you bring up so you don't flood your partner. Speak in a calm tone to increase the chances that your partner will hear you and respond positively.

Omega: Imago has been around for several decades now and has made a difference in many, many lives. Omega is interested in how individual transformation in turn changes society for the better. Have you seen this with Imago?

Harville: Yes, we have, and we're working on an exciting project to bring Imago to an even wider audience. We are stripping out the part of Imago that can be used to educate the public on how to be in a committed partnerships or marriage. We're working with a group of relational experts -- John Gottman, Dan Siegel, Michele Weiner-Davis, Ellyn Bader, and Marion Soloman -- to launch a global wellness movement that focuses on all relationships. Our first initiative is Project Dallas, where over the next few years we'll bring this technique to the general public using social media, traditional media, and trainings. The goal is to saturate the environment with the idea that healthy relationships make for a healthy society. We'll be filming what we do and will ultimately turn it into a documenatary.

Harville: Yes, and Helen doesn't mean just she and I think we can end divorce. All our partners in this endeavor feel the same. The point is there are a lot of couples who don't need therapy. But there isn't anyone that doesn't need relationship education. Maybe 10-20 percent of the population had a happy enough childhood not to have a problematic marriage. But that means 80 percent of us are great candidates for relationship education. We're going global with this, and we think it's going to change everything.

Harville Hendrix and Helen LaKelly Hunt will be holding a workshop: Getting the Love You Want : A Spiritual Path for Couples, June 22-24, 2012 at Omega Institute in Rhinebeck, NY.

Harville Hendrix, Ph.D., is a clinical pastoral counselor who is known internationally for his work with couples. He and his wife, Helen LaKelly Hunt, cocreated Imago Relationship Therapy and developed the concept of "conscious partnership." Their partnership and collaboration has resulted in nine books on intimate relationships and parenting.

Helen LaKelly Hunt, Ph.D., is cofounder of the Institute for Imago Relationship Therapy, and together with her husband, Harville Hendrix, developed Imago Relationship Therapy and the concept of "conscious partnership." She is coauthor of seven books with Hendrix: The Couples Companion, The Personal Companion, Giving the Love That Heals, The Parenting Companion, Getting the Love You Want Workbook, Receiving Love, and Receiving Love Workbook. She and Hendrix also cocreated a video for couples seen on more than 300 public television stations.