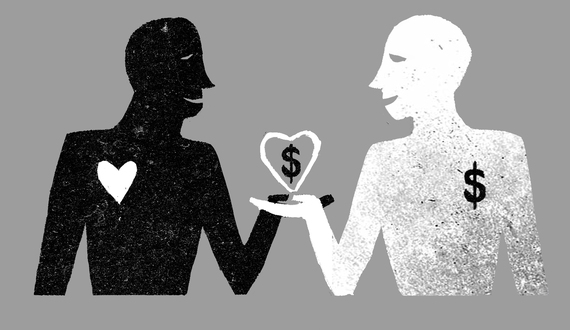 My father once said to me, "The best friends you'll ever have are the guys you do business with." After a glance my way he underlined his thinking, "Eventually the rest of them will screw you."

Like many college-aged men I was passionate about friends, particularly male buddies, and my father's inexplicable blasphemy, linking money with friendship, attacked the core of my youthful aesthetics. I tried to argue with him, but that never worked with Abe Waitzkin, who showered scorn at me with his bulging green eyes.

Friendship was my art form back in the day when I was searching for myself as a writer. Mostly I was drawn to would-be poets, Afro-Cuban drummers and political activists, none of whom had a scintilla of interest in my father's selling prowess, which was legendary in New York's fluorescent lighting business of the 50s. My friends laughed at my father's bourgeois values and our Great Neck life. I laughed along with them. What could a lighting fixture peddler know about profound relationships? Our friendships were fueled by John Coltrane, Jackson Pollock, and the sizzling camaraderie in On the Road -- absolutely not one merchant, manufacturer or salesman allowed in our smoky midst. Friendship and romantic love were linked at the hip and were defined for us by Jack Kerouac and Shakespeare, guys who really knew what they were talking about.

"So how did it go on your Boston trip?" asks Jaime Quinn many years later as she kneads her thumbs into my buttocks, working into a knot and then slowly traveling up my spine until she finds the curvature, the mother load of pain. She's killing me but I breathe and don't say a word. Jaime is tall, blond and beautiful. She's 30, young enough to be my daughter.

She and I have become very good friends during the past two years that she has done physical therapy on my chronic bad back.

"Did you visit your old school buddy?" She asks referring to my best friend from sixth grade, who is now retired and lives alone in a small apartment near the Boston Garden. Usually in friendships I am the one asking questions, but Jaime is my match.

Before she arrives at my office on Wednesday evenings, rather than assessing the state of my scoliosis, I think about ideas or stories I want to tell her. We might discuss an essay or scene I am writing or fall into a conversation about love, deceit, or mutability. Increasingly our talks have become probing and intense, a high point of the week for me, and I think for her as well.

"Anything new in his life? You've told me your friend rarely goes out?"

After the divorce, Steven mostly shut down. He didn't have much appetite for mankind. He worked as a city planner until he retired with a pension. For nearly 25 years, he has staunchly insisted he is finished with romance. He still retains an interest in basketball and occasionally goes to Celtics games.

After the massage part of our sessions Jaime stretches me out while she asks questions. Often I'm not in the best position to talk, but I can't say no to this beautiful woman who has me twisted in knots. Frankly, it surprises me when I think about intimate things that we have told one another. Our tacit agreement is to always tell the truth. Will either of us balk? I think this dare is at the heart of our hour together as much as stretching. But also the boundaries of a one-hour appointment seem to push the pace of our talk creating an urgency to make it as good as it can be.

"He's got a girlfriend," I say with my mouth pressed hard against the floor.

"Shut up!" she says, flirtatiously. Jaime often tells me to shut up when she's surprised. But really she is delighted and wants me to say more.

"After all of those years living by himself in a dark room. He has a girlfriend!"

I'm on my stomach and Jaime has my lifted leg bending toward my head. She is very strong. It feels like the quadriceps muscle is about to tear loose, but I don't say a word about it. "You're a little tight today," she observes.

But Jaime knows exactly when to stop. And I trust her.

"Tell me about this girlfriend?"

He met her in a park. She's a hippy. That's what he told me. She likes music and writing. She's 25 years old, but she looks like she's 20 or even 18. She's beautiful. He sent me her picture.

Late 60s. This is a miracle for him. Can you imagine such a thing? He feels alive again, like a boy in love for the first time... after nearly 25 years... so what do you think, Jaime?

"You mean because she wouldn't be in it for love?"

"Come on... why else would a beautiful young woman be with an old man?

"You don't think such things happen?"

"Rarely. Well, maybe if a man were famous or a powerful personality, if he had great charisma or an unusual imagination. She might be drawn to him. Maybe then. Is Steven such a guy?"

"Not really. He's a quiet man. But if he were as you've described -- a bigger personality, could you imagine yourself in such a relationship? I mean is there an old man out there that you could fall in love with?"

"I don't think so. Not me. I would look at him and cringe. I don't think I could get over his age no matter what he said to me. Just holding hands would feel weird. Like holding hands with your grandfather... who wanted to have sex... How could I ever kiss him? You can't fake sexual attraction. I just wouldn't go for him."

"But what if he treated the girl wonderfully. What if he gave her a lovely home and showed her a good time, better than she'd ever known before, took her traveling to places she'd always dreamed of visiting or never imagined visiting."

"In other words if he gave her money."

"I suppose. But what if he took care of her because he adored her? She is his last chance. He would adore her. Remember, he hasn't been with a woman in a quarter of a century. This is a miracle for him... Couldn't she fall for him?"

"Everyone who saw them together would think he was paying for romance and sex," she answers.

"Yuk. Everyone would think that. This would be very hard for any girl to get past. People on the street would think he was her grandfather, and if he said that she was his girlfriend they would think he is a pervert...

"But maybe she really is attracted to him Jaime. He tells me that she loves him. Can't such things happen in this world?"

Our session is nearly over now. Jaime has one more appointment before going home to Brooklyn. She is already headed that way.

"Sit up and put your hands behind your head," she orders bracing her knee against my back and pulling back against my elbows, stretching my pectorals. This last one is a killer. As she pulls back it feels like I am on the rack. I want to say "uncle." But I hold out. I guess I don't want to seem weak or old.

Now the hour is finished and Jaime has on her long winter coat. It is the second week in December and I am leaving town to go fishing with my family. I won't see her again for three weeks.

My young friend has a vulnerable endearing smile. She is a thoughtful caring person.

"You know, Jaime, if I didn't pay you the 80 dollars, our friendship would end right here and now. It would be over."

"Don't say that. It sounds just awful." She starts to cry. "Awful."

"But it's true. You'd never come over here to hang out and talk if I weren't paying you the money? What would you tell your husband -- you're spending the afternoon with Fred?"

She wipes her flushed face with her sleeve and searches for a tissue. "You're right," she says, almost inaudibly.

I can see my dad grinning.

Journalist and author, 'Searching for Bobby Fischer' and 'The Dream Merchant'