I want to make it clear at the outset. No one -- including anyone from Europe -- has the right to intervene in the pre electoral period underway in Greece. In this respect, there can be no surrender of sovereignty. Therefore, we will stay clear of the temptation to advise or exert pressure on the choices, which the Greeks alone are being called on to make in the spirit of complete freedom. Hence, the following observation: the European Union will accept, in the name of its principles and in accordance with them, the result of the elections on September 20. It is, of course, clear that I do not wish to see Greece return to the clutches of conservative forces of the right, who would like to again propose the catastrophic austerity prescription.

I have made this introduction, as is my duty, so that there will no misunderstandings or reservations in the discussions that we will be engaged in these coming few weeks, with the knowledge that the "Greek question" has surfaced and that we will continue to talk about it.

However, we -- and I am referring to Social Democrats -- want to restore EU-Greek relations, which have been beset by an unacceptable confrontation among members of the same family.

Today more than ever we must reiterate -- and we will fight for this -- that all member states are to be dealt with on equal terms pursuant to the rules in the treaties, which bind us. I say this, because the confrontation among member states can no longer be based on divisions classified in terms of "good and bad states," but in terms of assessing the behavior of each state within the framework of these rules. Clearly, if someone doesn't comply, this has to be recorded and the rules must be upheld, avoiding, however, the policy of the "double standard." 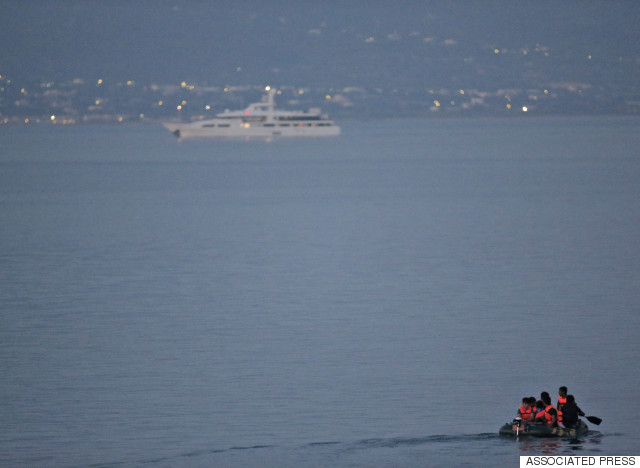 Migrants from the coastal town of Bodrum, Turkey, make their way to the Greek island of Kos

Recently, faced with the refugee tragedy -- Greece, along with Italy and several Eastern European countries, is on the front line -- there are some partners who are proving to be unequal to the task at hand. I will be blunt: the Union rightfully requested, and Athens accepted this by way of an agreement, that the economic and financial problems seriously threatening the stability of the Eurozone be addressed. Now Europe must show the same decisiveness by demanding that other member states behave similarly against the backdrop of the massive refugee crisis befalling Europe. Otherwise, as president Juncker stressed the other day during his report on the State of the EU before the EU Parliament in Strasbourg, Europe will lose its credibility, it will never be able to escape its appalling indifference and extricate itself from its repugnant self-interest, which has characterized the continent these last several years.

We wholly respected the choices made by the Greek people and we always upheld their dignity. It is not a question of a rhetorical ascertainment, but a reflection stemming from the events that we have witnessed.

Those were exhausting days and we were lavish in our criticism of the ruling classes for the mistakes they committed -- always in light of Europe's rules, just as we did not shy away from using tough language directed toward austerity policies and a certain satisfaction expressed by political and economic circles for the hard lesson that Athens had to learn.

And we fought with all our might to dispel the possibility, which many brandished as a Sword of Damocles, of an expulsion from Europe and the Eurozone. I don't know who invented the term "Grexit" and I no longer care to know. What I do care to say is that together with Greece, we managed to contain this threat. Neither a Europe without Greece, nor a Greece without Europe. The Treaties provide for the right of withdrawal, as well as sanctions against anyone who infringes on the fundamental principles of the Union. They are legitimate potential measures of recourse, but it would be appropriate for everyone, big and small countries, to keep in mind that resorting to these entails an exorbitant economic and political cost.

On the contrary, we must work today for tomorrow. In line with the original, founding spirit of Europe, which came into being to avert new wars, and in accordance with a modern vision and equal to the new challenges.

After the agreement that was reached, and while the Greek citizens have already undergone tough sacrifices, Greece has demanding obligations to meet. It can and must be successful, first and foremost for its own sake. Among the 10 priorities of the European Commission, which the (EU) Parliament ratified, beyond the planned 85 billion to support the requisite reforms, a 35 billion package for employment and development is provided for.

We are all struggling to overcome the crisis with substantive decisions and without grumbling. And when we underline the need -- I would also emphasize the qualifier "urgent" -- for implementing a more equitable economic and monetary union, I mean that we must not leave the door open for further austerity. As we have seen, that road leads only to catastrophe.

Let's pay close attention to what happens in Europe in the wake of two events of major importance: the Greek crisis, with the attendant risk of failure of the Euro area, and the refugee tragedy, which has reached massive proportions against a backdrop of growing populist, demagogic, xenophobic, and racist tendencies. These are two huge issues which have inserted themselves into the agenda of a Europe that is showing signs of fatigue.

Let's face it: we were one step away from the complete destruction of the entire European project, which was born from the ashes of the Second World War. However, during these last "heated" weeks of summer the harsh events stirred our consciences and, despite ongoing political and ideological resistance, things changed. Saving this remarkable edifice, which was built by people from different countries in search of a better society, depends on us.

Everything points toward the urgent need for Europe to effectively govern the economy and monetary policy, and cope with migration flows, for our security. Paradoxically, one of our partners is experiencing and facing the two problems simultaneously.

Europe, fully conscious of this fact is taking action. The Europe we love and want to support is the Europe of solidarity and recovery. We are convinced that the Greek people will not hesitate to fully assume their responsibilities.

This post originally appeared on HuffPost Greece and was translated into English.