When I tell people that there's a symbiotic relationship between science and liberalism, it turns out that what I usually need to define is not "symbiotic," which most folks understand to mean mutually beneficial, but "science" and "liberalism."

The word science is used today to describe the work of the thousands of researchers who conduct or monitor experiments, interact in scientific organizations, and publish in refereed journals. They belong to the world's only genuinely international community, and their findings are applicable from here to the far reaches of the universe.

Prior to the rise of science, some four centuries ago, ideas were evaluated by checking them against logic and everyday experience to see whether they "seemed good"--which is the etymological root of the word "dogma." Science created a new approach, in which ideas are tested experimentally. Those that fail such tests are either discarded or modified. Those that succeed are accepted, but only provisionally--which is why scientists still speak, say, of the "theory" of evolution, although the basic mechanisms of biological evolution are as well understood as is the physics behind microprocessors and nuclear power plants. Keeping the feedback loops humming requires free, constant, and often contentious communication between scientists all over the world. That's where liberalism comes in.

By liberalism I mean the original political philosophy called by that name--the one espoused by John Locke and embodied in the Bill of Rights. Liberalism is based on the hypothesis that people ought to be maximally free, with the government intervening only to the extent required to protect their freedoms against abridgment by their compatriots or by enemies abroad. This was a radical idea in the eighteenth century, when few people had much education and the general public was routinely slandered as ignorant and untrustworthy. Locke himself feared that the public was so mired in "passion and superstition" as to be apt, as Voltaire put it, to act irrationally and "speak without thinking." Sharing such qualms, many of the American founders described the newborn United States as akin to a scientific experiment. "No experiment can be more interesting than that we are now trying," wrote Thomas Jefferson in 1804, "and which we trust will end in establishing the fact, that man may be governed by reason and truth."

Liberal democracy--the form of government in which a majority can elect leaders but not constrain human rights--has survived innumerable social experiments to become the choice of more than a third of all humanity and the stated preference of most of the remainder. (Even outright despots feel obliged to pay lip service to its inevitability, if only as a distant prospect to be realized once the populace is "ready.") Yet in the United States--and, increasingly, in parts of Europe as well--the term liberal has come to mean the political Left. This has served only to cloudy the political waters. Those on the Left are free to call themselves anything they like--such as progressive, a term many have been taking up lately--but they ought not to be called liberals. Liberalism is an independent political philosophy, with no inherent connection to either the Left or the Right.

In science it often happens that confusing phenomena can be better understood by adding a dimension. Einstein laid the foundations for modern cosmology, the study of the universe as a whole, by portraying three-dimensional space as a curved continuum embedded in a four-dimensional "space-time continuum." Contemporary cosmological models involving string theory and membrane theory invoke ten or more dimensions. (They're beautiful; the jury is still out as to whether they're true.) Drop in on a scientific conference nowadays and you'll see talk after talk illustrated with two-dimensional slices of hyperdimensional "phase spaces" that may have no physical reality but aid in comprehension.

Political dynamics become a lot clearer if we do something similar, by replacing the old, one-dimensional, Left/Right political spectrum--a relic of the way delegates happened to be seated in the National Assembly circa 1789--with a two-dimensional diamond: 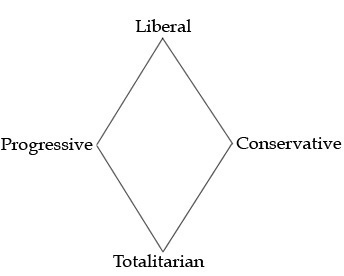 Such diagrams have the virtue of putting opposing philosophies in opposite positions, rather than trying to squeeze them all into a one-dimensional line. The opposite of conservatism, which cherishes practices that experience has shown to work in the past, is progressivism, which looks to the future. The opposite of liberalism is not conservatism but totalitarianism, the elevation of state power at the expense of human rights.

As the diagram suggests, liberalism is equally accessible to conservatives and progressives alike.

If you are a liberal conservative or a liberal progressive you will show up, on the old one-dimensional diagram, as a "moderate." (Most Americans are called moderate because most are liberal, in that they support human rights and are suspicious of big organizations, whether governmental or private, that threaten those rights.) When people say that they have become more moderate with age, what they usually mean is that they've become more liberal--that, having come to appreciate the virtues of freedom in action, they have strayed from the dogmatisms of the Left or Right. From this perspective there is no need for neologisms like "neoliberal," "neoconservative," or liberalism with an uppercase or lowercase "L." These words simply describe various trajectories taken on the playing field of tradition vs. innovation and freedom vs. despotism.

Science, like liberalism, has no fundamental connection to the Right or the Left. Conservatives have sometimes closed their eyes to science, as when the George W. Bush administration sat on its hands over global warming, but so have those progressives who would "democratize" science by discouraging research programs that they fear might promote social inequalities. Biblical literalists ignore empirical evidence when they claim that the earth is thousands, rather than billions, of years old--but so do progressives enthusiastic about homeopathy or progressive education, which similarly lack any scientific basis. Glenn Beck's fact-free fulminations about the Obama administration's imagined plans to "massacre" Americans have their progressive counterpart in Bill Maher's fantasies about big pharma conspiring with Big Macs to sicken and then cure us all. Such baseless alarmism used to be commonplace: Before science came along, every comet swimming into view aroused predictions of disaster. Those days are gone, but most Americans still don't understand what science is or how it works.

Science is inherently antiauthoritarian: If a theory fails experimental test it doesn't matter how smart or powerful its proponents may be. Science is also highly social: No one scientist knows enough to go it alone for long. Hence science thrives under liberalism, which protects freedom of property, speech, travel, and association. Their alliance has already freed more people from poverty, ignorance, and an early grave than every other approach in all recorded history combined.

It used to be thought that science was a neutral tool, like a shovel or an AK-47, equally serviceable for tyrants and free citizens alike. The Soviet Union and Fascist Germany perpetuated that myth by portraying themselves as gleaming powerhouses of scientific technology--but proved, once the curtains of their obsessive secrecy had dissolved away, to have been anything but. Today, China's Communist rulers are busy building laboratories, bestowing privileges on their indigenous scientists, and recruiting researchers from abroad in an effort to make China a world-class scientific power. Their efforts are unlikely to succeed, however, until the Chinese people are free.

Scientific creativity, like all creativity, is unpredictable and can be dangerous: To learn how the sun shines is also to learn how to make nuclear weapons. Global warming is the latest, and in some respects the most serious, example of this fact. It can be addressed neither by going back to ancient verities nor by marching in lockstep toward a progressive vision of a predetermined future. It may, however, yield to the potent combination of science and liberalism. Certainly there are resources available. The United States spends half a trillion dollars annually on importing foreign oil, while the world spends $7 trillion a year on energy; a fraction of that amount can put a dent in global warming. Should science and liberalism fail to meet this test, however, illiberal rule may well gain ascendance in the resulting emergency.

For as long as I have been alive, people have been saying that science is fine in its place but has inherent limitations. Science, it is said, can adjudicate questions of fact but not of value. It can weigh quantities but not qualities. It shows "how the heavens go, but not how to go to heaven." I wouldn't be so sure about that. We human beings all belong to one species, on a planet where all life is kin, and astronomers at their telescopes find no wall bifurcating the universe. To insist that we live in two worlds, one accessible to science and the other not, is to back the losing line in the winningest game ever yet played by humans. My money's on science and liberty.