In the recently released "Islamic Declaration on Global Climate Change," Muslim scholars from twenty countries joined Pope Francis in calling for action on climate change, in effect adding 1.6 billion Muslims to the 1.2 billion Catholics now called on to support the climate change movement. Acknowledging there will be 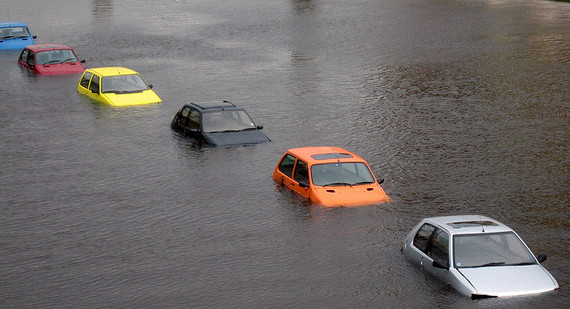 climate deniers within that group -- Presidential candidate Rick Santorum tried to make the argument just this week on Bill Maher's Real Time -- that's more than a third of the world's population. A statement from Hindu leaders is expected soon; Buddhist are planning to update their 2009 climate statement; and a week ago, 409 Rabbis signed a Rabbinic letter on the Climate Crisis.

Another tipping point is reached, and so I believe that just like other climate issues that hit their breaking point -- the hole in the ozone, acid rain in the U.S., air pollution in Los Angeles -- global warming can be mitigated, if not reversed.

But there is a growing recognition that global warming or climate change is only one symptom of a much bigger mess. With the Catholic and Islamic declarations, what was once a radical demand for solutions to environmental woes has become a mainstream, clarion call for a reinvention of society. Pope Francis in his August Encyclical on "Care for Our Common Home" names this "the ethical, cultural and spiritual crisis of modernity" caused by an inaccurate world view:

"When human beings place themselves at the centre, they give absolute priority to immediate convenience and all else becomes relative."

"We have now become a force dominating nature...and the cause of such corruption and devastation on it that we are in danger of ending life as we know it on our planet."

Both documents acknowledge that the natural resources of our "common home" are limited and that infinite growth is simply not possible. And both speak of the need for humility.

Bill McKibben, putative leader of the climate movement, eloquently summarizes the Pope's diagnosis in The New York Review of Books:

The ecological problems we face are not, in their origin, technological,' says Francis. Instead, 'a certain way of understanding human life and activity has gone awry, to the serious detriment of the world around us.' He is no Luddite ('who can deny the beauty of an aircraft or a skyscraper?') but he insists that we have succumbed to a 'technocratic paradigm,' which leads us to believe that 'every increase in power means an increase of "progress" itself...as if reality, goodness and truth automatically flow from technological and economic power as such.' This paradigm 'exalts the concept of a subject who, using logical and rational procedures, progressively approaches and gains control over an external object.'

What both edicts demand is a revolution as dramatic as Copernicus placing the sun instead of the earth at the center of the solar system. Just as that relatively narrow change to mathematical models exploded the era's established ideology, questioning church dominance and a ruling class designated by Divine Right, so climate change must remove humans as the dominating force over the natural world and causes us to question the social value of those who own and manage our primary institutions, business and government.

As for the role humility must play in addressing climate change, the success of necessary government reinvention demands it. The founding of America was based on humility as "the indispensable virtue for greatness" David J. Bobb wrote in Fast Company. Likewise with business, and leadership guru Jim Collins agrees. His Harvard Business Review article "Level 5 leadership: The Triumph of Humility and Fierce Resolve" identifies humility as key to creating a sustainable business success: nowhere will the ability to admit failure and change course be more important than in dealing with climate change.

Evidence that our arrogant control-and-confront leadership has failed is ubiquitous, from extreme heat and severe water shortages here in the U.S. to the virtual death of the ecological infrastructure in China, where political corruption has created a Communist-Capitalist apocalypse in which natural resources are depleted or despoiled and virtually all species including humans are sickened or killed.

The world's great religions insist that our secular leaders must either adapt to the new reality or be replaced. In the Pope's words, "What would induce anyone, at this stage, to hold on to power only to be remembered for their inability to take action when it was urgent and necessary to do so?"