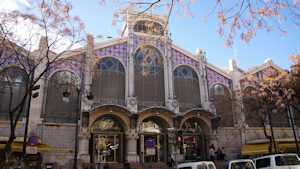 This will be the first ever blog I have written that is not devoted to music and the arts. What it is devoted to, however, is incredibly closely allied to music and musicians, something which musicians prize almost as much as their own art. And it is most definitely cultural. I speak, of course, of food. So I hope I shall be forgiven for devoting this particular blog to a quite extraordinary tale of finding a Market, the like of which I have never come across before.

But before I begin my story proper, I'd like to take you back in time to when I was a boy living in the Far East, by way of explaining why this most recent experience appears to mean so much. My father, who was in the military, was stationed in Singapore for several years after the war where we lived as a family, very happily enjoying the adventures that such a place inevitably provides. Each Saturday my father would take me with him to do the weekend shopping at the local Market. Part of this ritual was to buy the chicken for the family's Sunday roast. He chose the chicken from a whole range of live birds kept in deeply populated cages, and the stall owner would take the preferred bird out and dispatch it in front of us. As a child I watched this weekly bloody procedure with fascinated otherworldly objectivity, the way all children are drawn to the strange and macabre. I am not even certain I associated the rite with the food presented the next day; it was all bound up in the Market experience--the sights, colour, noise, theatre and spectacle, none of which seemed to have anything to do with food. 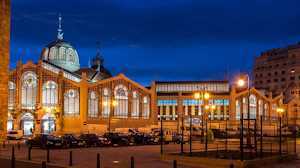 I mention this by way of introduction because I have recently experienced another amazing Market, and these thoughts and memories from the past have emerged unbidden from the recesses of my mind. This new experience is the Mercado Central in Valencia, Spain. It is the largest indoor market in Europe and from the outside it might just be mistaken for a cathedral. I certainly think of it as a cathedral devoted to food and communal theatre. It is huge. I have been going there for weeks now and I still get lost. I also lose those really special discoveries, stalls that sell stuff no one else does that then seem to vanish in the Bermuda Triangle of the Market's labyrinth.

The Market is now 101 years old and it is Art Nouveau in design, created by two Spanish architects, Francisco Guardia Vial and Alejandro Soler March, both from Barcelona. There is, refreshingly, no Gaudí influence in their design at all. Instead the structure has a huge, very high, central dome, a smaller secondary dome at the west door, about eight entrances, and stained glass everywhere, allowing the brightness of the Spanish day to flood the interior with greens, reds, whites and blues. The market boasts something like 400 independent stalls (I have no idea how the whole thing is managed) selling everything from ...........well, I will come to that list in just a bit. I need to do a bit of scene setting first.

Banish from your minds the image of supermarkets like Whole Foods and Sainsbury's or "nice" Marks and Spencer's, with their sanitized produce and year round consistency of offerings. Valencia gives us something far more exciting and visceral. 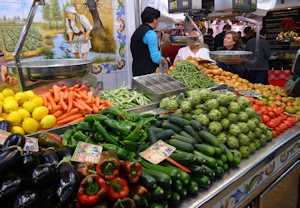 To begin with, there's the smell and then the noise. You can smell the produce. It may have ice thrown over it to keep it fresh but it is there before you, open to the critical eye and prodding touch. You can smell fresh thyme, rosemary, chives, basil, cilantro, parsley, tarragon, and dill in great open baskets.

The seafood has that beautiful fresh ocean smell announcing that these fish and prawns and lobster and squid have just this moment been caught. And it's the choice of fish that is so extraordinary. There are many I have never seen before and I still don't know what Novado, Perca, Percebe, Galeras, Salmonette, Pescadilla and Sepia are, and we haven't had the courage to try them yet. But we will. There are even stalls devoted exclusively to different types of snails and other mollusks. Then there is the whole business of selecting and buying, which is done by the stall owner with great flare, good humour and wonderful expertise. They all want to be genuinely solicitous and will help you select, and then advise on the best method of cooking. Their produce is considered by them to be the most serious thing in the world and they want to give the best. 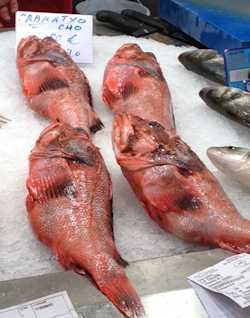 As I mentioned this is not Whole Foods so the fish here are ....well, whole, so you watch your choice catch being gutted and cleaned. You can even take home the viscera to make your own fish stock. Not for the faint hearted are the stalls that sell live eels. There seem to be hundreds of them in a shallow pool and they are very active. And, yes, the stall owners dispatch them for you after you have made your choice in a very fast, matter of fact way. I was really quite shocked the first time I saw this but have grown used to it as a way of life. The experience did lead me to try eel at a restaurant and I must say that my conclusion was that this is an acquired taste, which I may acquire much later in life. Like Wagner. 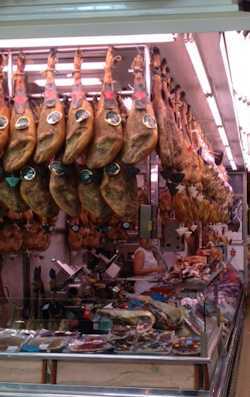 The Market has an established structure. It is very orderly with large sections reserved for different types of foods. So you find stalls grouped into areas for red meat; for poultry and rabbit (fresh rabbit is very popular here and is a staple for Paella Valenciana which you can find everywhere); for vegetables including stalls only selling lettuces or pulses; for all types of cheeses such as their goats cheese which is so lemony and soft and magical; for Jamon and there are whole one-legged armies of ham hanging everywhere, but what a pleasure, particularly Jamon Iberico which surpasses, to my taste at least, Italian prosciutto.

There are stalls just for spices, from turmeric to paprika. And I found one for saffron whose prices for a few grams of the precious stuff seemed to harken back to the gold standard. 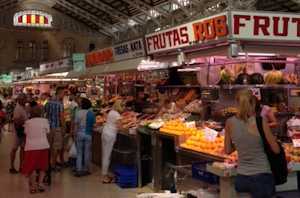 There are fruit stalls, which change every day with different produce. Sometimes there are figs, then there are cherries, or tiny wild strawberries, but always the choice depends on what the season offers.

There are stalls devoted to olive oil and fresh olives and all kinds of nuts and even ostrich eggs! Also stalls for freshly baked bread and cakes and empanadas of all varieties. And there are three or four cafes such as the Central Café where it is impossible to get a seat at any time of day because there is always so much demand. They serve an espresso -based coffee called a cortado, which is the equivalent of a macchiato. It is really strong and provides an instant shock of energy. 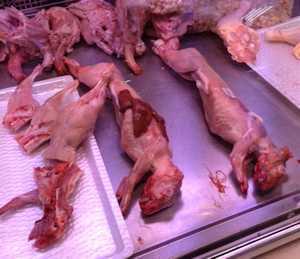 The deafening noise in the Market is one of concentration and focus. There is no haggling. No background music. No announcements. No special offers. The place is full, positively heaving. The Valencians love it. People from all walks of life find their way there. It is popular on the tourist itinerary and you see organized lines making their way around the stalls. But for me the place belongs to women, for it is they who have made it their own. The grandmothers and the mothers and the daughters know the place inside out. They have all made assessments of which stalls are best and you will find throngs in front of these. Of course these have the best prices and the best quality. All this is communicated and known by word of mouth, gesture or just plain observation. There is no bad behavior in the Market, no shouting, no tantrums, and everything seems to be governed by a long tradition and respect for the serious history and importance of food. And it is so easy to become part of its way of seeing the world because the culture is really very strong and, once you have tasted the food, immensely convincing. I see my wife Virginia now as part of that intuitive circle of women who can spot the best red pepper at 100 meters and is willing to queue with the best for the best produce. 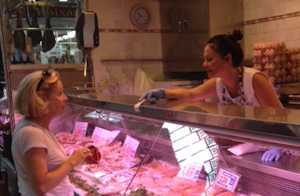 I watch Virginia (L in photo) every day that she visits the Mercado (I also get to carry the shopping!) After just a few days of finding the "right" stalls, she started to make friends with the stall owners themselves. Her Spanish is pretty good and she has studied the names of most of what we like to buy. The herb stall was the first. She made a killing by knowing the Spanish for basil (albahaca) and received a bouquet of parsley as a prize. After that it was the fish stall that sold fresh anchovies (boquerones.) Have you ever tasted fresh anchovies cooked with garlic and tiny tomatoes and then served with spaghetti? That's something! The follow up was fresh sardines, and the next day wild salmon presented and then discussed, with the most charming of smiles, by the stall owner who advised on multiple ways to cook the fish. Our journey into this new culinary world also included buying our first ever, fresh rabbit, which we affectionately called "Fluffy." Something of a misnomer given that it had been skinned, but the thought was there. This adventure continues nearly every day.

The energy of the Market is life enhancing. It is visceral and electric. It's a world far removed from "middle class morality" as Alfred Doolittle in My Fair Lady would have said. There is no hint of refinement and class, just the need to provide the best for everyone at very low prices and in the most helpful way.

There is an arts analogy that comes to mind. The Market is like going to see Shakespeare at the Globe Theatre in London, with Mark Rylance in the leading role. It's old fashioned, contemporary, meaningful, energized, revelatory, sensual, fun, visceral, potent, risk taking, unadorned, and so very real. It's what art and performance should be about. Grabbing life's experience in the moment and biting into its very core like the taste of an almost rotting sweet fig or the sublime texture of seafood paella.