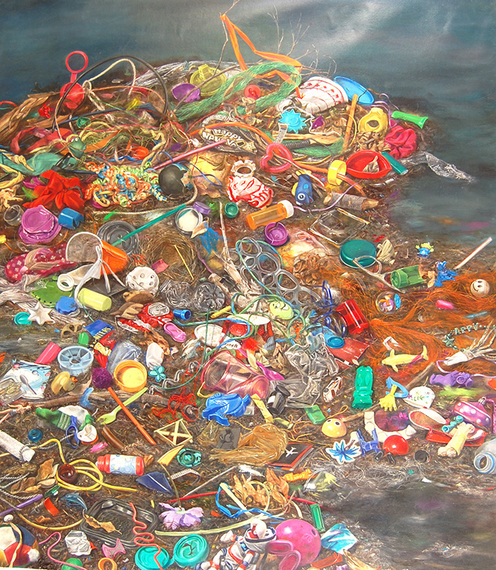 In a smallish upstairs space at the Armory Center for the Arts in Pasadena, Constance Mallinson's Raft, a hyper-detailed canvas depicting the detritus of consumer culture, was recently on view for two months. At the close of the exhibition, on November 29th, the painting was taken down and handed over to its new owner, who hadn't paid a cent for it. "Raft," the centerpiece of the artist's carefully designed "free painting" experiment was given away -- not sold -- in an attempt to bypass and raise questions about the usual artist/dealer/collector nexus and its operations.

"I wanted to display and give away the painting to circumvent the traditional marketing system," says Mallinson, a respected veteran of the LA art scene. "I have certain problems with it, the way that art and money collide in a way that can be injurious to the perception of art-making." Mallinson's idealistic experiment positioned the work of art as something with no price tag that couldn't simply be purchased: it had to be "valued" but not in monetary terms.

Any and all interested parties were asked to fill out an online form and be interviewed by Mallinson. The interviews were videotaped and then handed over to a panel who would decide the painting's fate. Sinéad Finnerty-Pyne, the supervising curator, was impressed from the start by Mallinson's ideas and intentions: "It took a lot of courage and she (Mallinson) really put herself on the line. It was an open-ended process." 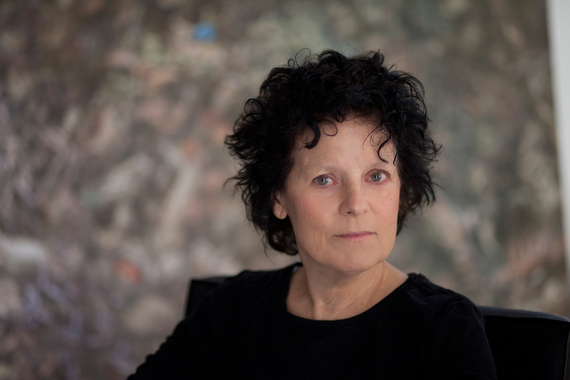 "I wanted to challenge the modus operandi of art collectors, which usually consists of just showing up with their check books," Mallinson philosophizes. "In my experience, the collecting process has always been so anonymous. There is never any contact, never an invitation to talk to collectors about the work. There has always been this opacity. With those problems in mind my project was designed to do a lot. I wanted to incite a lot of looking and talking and find out how people responded to my work independently from the usual gallery BS."

Malinson, a flexible and subversive thinker, knew that the imagery of "Raft" would in itself be provocative, hopefully in a good way. A dense accretion of castoff items -- Mallinson thinks of the imagery of the painting as verging on "apocalyptic" -- it is a visual record of the "mind-boggling" stuff she finds on her Rauschenbergian daily walks: lost toys, dead birds, Christmas ornaments, fast food wrappers, dog toys and more. "There is a fairly strong message in this painting," Mallinson comments.

It doesn't take too much of a deep reading to realize that "Raft" is about the fine line between beauty and trash and about our tendency to purchase and discard. Those dynamics apply not only to the consumer goods we all rely on, but perhaps to art and art collecting as well. Alternatively, Mallinson offered her painting as something to be contemplated and cherished. One of the perceptions embodied in Mallinson's experiment is that contemporary works of art, made for a hungry art market rife with speculation, have themselves begun to seem a bit more "disposable."

At the beginning of the process, a variety of interested parties spoke to Mallinson including a teacher from an inner city magnet school for the arts who wanted the painting to hang in her classroom to inspire students. There was also a renowned breast cancer surgeon and researcher who wanted to either sell the painting to raise funds or hang it in an area where patients could look at it. Add to that: four artists, an architect and a collector. One of the artists had the intention of lending the painting out to anyone who wanted it for a period. Rather than just being obliged to open their checkbooks, the applicants were asked questions that rarely gets asked of prospective art collectors, including two doozies: "Why do you want this work of art?" and "Are you prepared to properly care for and preserve this painting?"

All of the conversations were video-taped, and then handed over to the panel. The panel, made up of six carefully chosen art world professionals -- a critic, two art historians, a gallerist, a curator and two artists -- then deliberated after watching the taped conversations. As the panel consulted, some themes emerged: the painting wasn't really "right" for a lot of people. In many cases it was clear that the painting might not be properly preserved or cared for. Art historian Colin Gardner, one of the panelists, observed that the project was a kind of "Trojan Horse" that delivered its message stealthily. One panelist offered that the painting should be returned to Mallinson for her to bestow, but that would have been contrary to the artist's original intentions.

After over two hours of discussion and much back-and-forth the painting was ultimately awarded to... 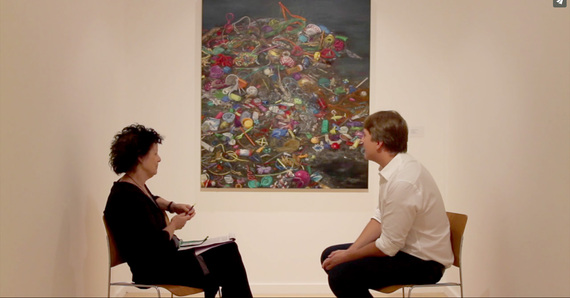 Constance Mallinson interviews Matthew Scheele about his interest in "Raft"

A private chef of moderate means and Scheele won the panel over with his sincerity and his genuine interest in the painting. "The result blew my mind," says Mallinson, "but the panel found him so sensitive and smart, and they felt in the long run that he had responded to them with winning simplicity and honesty." In a surprising way, the choice of a collector as the recipient of the painting re-affirmed the traditional notion that paintings should be cared for by people who really love them. It was, in the end, an unexpected but wonderful result.

"It was fascinating," Mallinson reflects. "It ended up renewing my belief in the power of painting. The panelist seemed to feel that Matthew had the proper attitude and that he would take care of it, as collectors have throughout history. As one panelist reminded me, the reason we have museums full of gorgeous paintings is that collectors recognized and valued the uniqueness and beauty of the art objects and took care to preserve them through wars and such. So perhaps if the painting had gone to a venue where it could have been damaged or stolen or not properly valued as a special object, it would have gone against the grain of this wonderful history of taking care of art for the future. Painting survives because of that aspect."

From Scheele's point of view, his involvement in the project was an experience that deepened his experience of Mallinson's work and also heightened his sense of responsibility towards it:

"On viewing the work I was immediately struck by the scale of 'Raft' and the time and effort it must have taken to create it and while the technical excellence of the painting immediately appealed to me, initially the subject matter did not. However, the nature of the project forced me to consider the work more closely. It was no longer a work of art that I could accept of dismiss casually because I had to consider it as potentially being part of my collection. This need for a deeper consideration of 'Raft' was, for me, the power of the project. I had to stop, look, and think and because of the challenging nature of the subject, think deeply. In my subsequent interview with Constance she referred to the work's title as, 'a portal into the painting', for me that is how the whole project functioned."

Scheele, who had initially been a bit put off by Mallinson's painting had grappled with it as a part of the process and had been won over. This ultimately raised some interesting questions for Mallinson: "If an investor is just buying/speculating does that discomfort ever get expressed? Is that doubt and unease really an important part of contemporary art?"

Ultimately, the "Free Painting Experiment" is just a beginning: Mallinson now envisions an annual "Free Painting Project" in which other artists could participate and play roles in deciding where there works would go. She imagines a very different kind of exchange system involving art, perhaps a "sharing economy." However it plays out she has a new optimism about the potential for a system that is satisfying both to artists and to the recipients of their works. If she can make that happen -- as it did in her first experiment -- Mallinson is confident that art can "really do the work it is meant to do in a culture."

Constance Mallinson: Free Painting from Armory Center for the Arts on Vimeo.