Monday nights belong to "The Bachelor" and "The Bachelorette," but Lifetime has cooked up a reality show that's juicier than both of them combined -- except it's not actually a reality show. "UnREAL" is a new scripted drama that chronicles the behind-the-scenes happenings of a "Bachelor" analogue called "Everlasting." And, folks, let us tell you: It might be the most fascinating thing on TV this summer.

At the center are Quinn (Constance Zimmer), the diabolical executive producer of "Everlasting," and Rachel (Shiri Appleby), a field producer who returns to the show after suffering an on-air breakdown during the previous season's finale. Quinn barks orders from a control room while Rachel and the other producers do most of the dirty work, manipulating contestants in the name of good television. All of the relationships on "UnREAL" are a bit bedraggled, yet for all the devious minds it depicts, the show does not so much impeach reality television as probe its ethical quandaries, as well as those of the viewers who tune in so loyally.

Zimmer, whose résumé includes "Boston Legal," "Entourage" and "House of Cards," chatted with The Huffington Post about the show's implications, Quinn's messy relationships and what it took to convince her to appear nude on the "UnREAL" billboards. 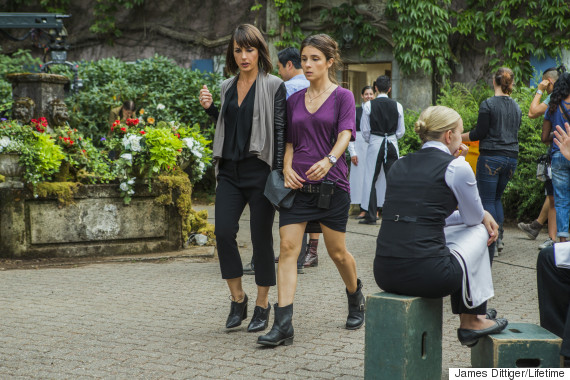 Were you hesitant about starring on a Lifetime show?
I questioned it the first time they offered it to me. And then they came back after they had picked the show up for 10 episodes and said, "We know what we did wrong with the first show and now we know what we’re going to do with the series." I had a meeting with [creators] Sarah Gertrude Shapiro and Marti Noxon, and I had met Nina Lederman, the head of Lifetime, and they all came at me with the concept that they wanted this show to rebrand Lifetime. If you did this show on HBO or Showtime, it would be more expected and you would want it to be even darker or even dirtier. But because it’s Lifetime, it’s so unexpected that it makes it that much more appealing.

How was Quinn pitched to you?
There weren’t scripts written. There were just outlines and concepts and story points. For me, I was very concerned about playing this one super badass female, and I wanted to make sure that we were going to dive into the vulnerability of her and why she has developed this hard shell. She doesn’t really have a choice. She’s fight or flight. It was super important for me to know throughout the series that we were going to get to understand her personal struggle. And they guaranteed me that. They also spoke with me about us developing Quinn together, which is something every actor dreams of hearing.

Sarah Gertrude Shapiro, the show's co-creator, used to work on "The Bachelor." Has she talked to you about which aspects of the script are grounded in reality?
When we were shooting this show, to be honest, the fact-versus-fiction stuff of reality TV versus the show we were shooting kind of never came into play. We took our show as it was standing as being real. You kind of have to in order to sell it. I think that Sarah being first and foremost a writer and creative person -- and yes, she worked in reality television years and years ago -- was definitely about wanting the story to be a story about love and it being set in the world of a reality television show because it’s such a rich world to place this princess fantasy and how everyone is struggling to find true love. And it’s really about the lengths people will go to to find that.

It's interesting to think of "UnREAL" as a show about love because it's decidedly unromantic. Take Chet and Quinn, for example.
That’s a complicated relationship, as all the relationships are on the show, which is actually why I find it so fascinating. Nobody’s perfect, nobody’s good, everybody is kind of evil in their own way. I believe that they get to a good place at the end of this season. Do I think it’s the right place for them? I don’t know, it’s still undecided. But I do believe that Quinn has such a deep, deep love for Chet but it has been dirtied so many times, and I feel like women can only take so much dirt before they get suffocated by it. The real question for me is, is she at the level where she’s like, "It’s been enough now?" Is she able to let that go? It’s the only thing she has besides Rachel. It’s hard when you’re going to dark places -- who do you run to the fastest? It doesn’t matter what your history is with that person; you just run to anyone who will give you that love and that support that you think you need.

What's Quinn's biggest manipulation that's grounded in reality?
I would hope that our show is definitely the exaggerated version. Because I’ve been manipulated myself as an actor by producers or directors or writers, I would have to believe that yes, I’m sure some of this type of manipulation is happening, especially between the producers and the field producers, which is my character and Rachel. But her biggest, and I think her worst, manipulation is Rachel. She really does something pretty, pretty -- I don’t think it’s forgivable. I remember when I found out I had to do it, I thought, “Oh my God, please don’t let me be that person.” I would hope that no real producer would go to the lengths that I go to.

What sort of manipulation have you experienced?
When I say we get manipulated all the time as actors, the difference is we are being convinced to do certain things for the character, and sometimes we’re like, “Oh, I don’t know if my character would do that,” and they’re like, "Well, let me tell you this way. If you don’t do this for your character, then this won’t happen.” It’s sort of manipulation, but the difference is that we’re playing characters. We’re not ourselves. So on reality television, they’re manipulating people. Even something as simple as when they came to all of us and said they wanted us to be naked on the billboard for "UnREAL." There was a lot of conversation, a lot of back and forth. And that, to me, is not so much a manipulation but more a convincing of what is the craft, what is the character, what is promotion, what is you, what is me -- all that kind of stuff.

How was that settled?
It ultimately came down to the fact that it wasn’t me. It wasn’t Constance Zimmer on a billboard. It’s the characters we’re playing. The concept of the show is people being stripped down to their core. Some people lose their shit when that happens, and some people find themselves. And Quinn has to be stripped down of all her stuff in order to get to the real person. And even then it’s still questionable. Now, did they manipulate me into realizing, "Oh, you’re right?" Who knows? But ultimately I think it did its job, and that’s exciting, so now the rest is history, as they say.

How much affection does Quinn actually feel for Rachel?
I definitely, 100 percent, believe that Quinn loves Rachel. She has to love her and she has to only believe that what she is doing is for the best for Rachel. To me they are incredibly codependent and they very much develop a mother-daughter relationship. That, to me, makes it even more complicated, because I believe Quinn believes she knows what’s best for Rachel, but [it's] the Rachel that is at work, right? Quinn only knows career. It’s her whole life; it’s all she has. I don’t even know if Rachel knows the vulnerability of Quinn either. It’s a part of them that they don’t show to each other. But 100 percent, she does like her and truly loves her and is trying to help her; she’s just not very good at it.

Did you watch "The Bachelor" to prepare for the show?
I definitely was not a big watcher of any of the dating reality shows, but I did have to watch them when I was doing the show because I was reading these scripts and I couldn’t even fathom or believe what was going on. I did watch a few shows just to understand what I was looking at, but I have to tell you it was so bizarre reading our scripts and then watching some shows just as research, almost like background noise. I was watching it like Quinn. It was so bizarre. I could see certain scenes where they were pretending there wasn’t a camera, but there was a camera and they’d just slightly open the bathroom door enough to shoot through the crack in the door, and I was thinking to myself, “Oh my gosh, I could see Quinn saying, ‘Okay, get her in that bathroom, open that door, shoot through it.’” It’s like you’re inside your own world.

It's both recognizable and foreign.
Exactly, and the closest I came to that was probably "Entourage," where I was playing Dana Gordon. But I was Dana Gordon in an office on the Paramount lot where I did have a meeting with a head of a studio in that same office, and now here I was as an actor playing the head of the studio in the same office. That was probably the closest I’ve come to being inside the world of the world.

What sort of response have you gotten from the reality TV industry?
The only stuff we’ve gotten has been amazingly positive. Again, it’s all through social media, so I don’t know what to believe anymore. But a lot of past contestants have been posting on Twitter, comparing, “Oh my gosh, they did that to us on this show.” When we’ve done screenings, we had a girl walk up to the microphone at our panel and say, “I don’t have a question, I just want to tell you guys that I was Rachel and I just got out.” And she said, “You guys have depicted this world almost too close.” All of us got goosebumps. We’re not trying to condemn reality television. I get it; it’s entertaining. It servies its purpose. All we’re doing is making a TV show that happens to be set in reality television. We’re showing you behind the scenes of the struggles of the people who are making these shows. It could really be anything, but because the world of reality television is so rich, you can do so much with it. Why not set a love story in that world at the same time? 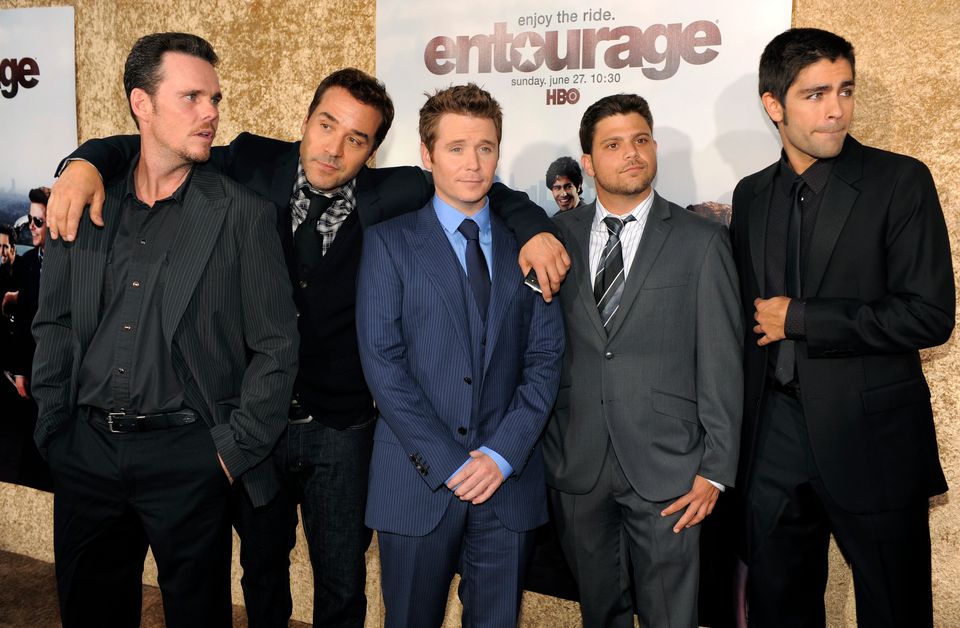