Everybody poops, but not everybody poops well: A recent study published in The American Journal of Gastroenterology found that the number of people arriving at hospital emergency rooms for constipation is on the rise.

Depending on one's definition of constipation, the condition can affect between 12 and 19 percent of the population and cost an estimated $1.6 billion in emergency room visits in 2011. A 2002 study also found that Americans spend about $800 million a year on laxatives.

But beyond the numbers, constipation is a very real problem that almost everyone will experience at some point in their lives -- whether it’s brought on by travel stress, unfamiliar surroundings, medication, age or a changing lifestyle and diet. Dr. William Chey, a professor of medicine at the University of Michigan and co-editor-in-chief of the journal that published the study, believes that the U.S. is going to see these numbers rise even more as the population ages. In part this is because the condition might be exacerbated by aging colons, as well as lifestyle changes linked to being elderly: medications, less physical activity and more prepared or processed foods.

“People at a cocktail party will always joke about other people’s bowel habits, or even their own, but it’s amazing how much people suffer with this problem,” said Chey. “It’s a particularly difficult problem because people are so embarrassed to talk about it, and often times refuse to get help because it’s not something they want to deal with or talk about."

Most of us tend to think of constipation in terms of stool frequency -- how much is too much, and how little is too little? But while the average frequency can run from three times a day to at least three times per week, the truth is that the normal amount of poop varies widely, based on what’s right for your body.

"There are many people who move their bowels every other day or every third day and that’s normal for them, and there’s nothing wrong with that if it’s your normal pattern and you’re comfortable in between,” explained Chey.

On the other hand, there’s more to constipation than frequency. Symptoms can also include the stool's consistency -- namely, whether or not it's hard -- the need to strain or a sensation of incomplete evacuation, meaning the feeling that there’s more up there, but you just can’t get it out.

"Those things, or combinations of any of those symptoms, are what we use to define constipation,” Chey concluded. “It's a pretty broad term, but it’s different things to different people."

Just as the definitions of constipations can vary, so can the solutions. In addition to typically recommended changes like adding more fiber to the diet or exercise, Chey has patients that swear by abdominal massage, relaxation training and mindfulness meditation to help keep things moving along. What’s important to remember is that if you can’t find any relief after several weeks, it’s paramount that you see a doctor, no matter how embarrassed or uncomfortable you may be about the whole business.

If you occasionally struggle with uncomfortable constipation episodes, check out the graphic below to see which steps you should take to get things going again. And if eating more fiber or trying over-the-counter medication doesn't do the trick, that’s when you know that you definitely need to see a doctor. 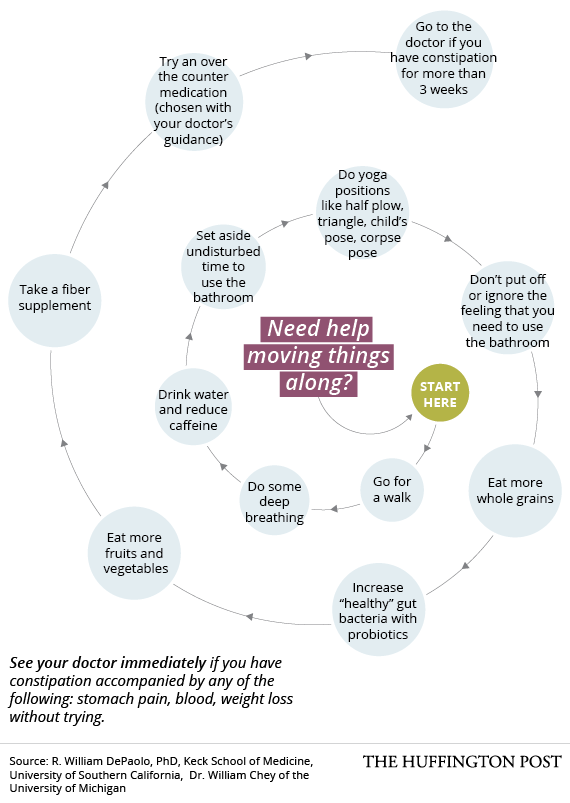