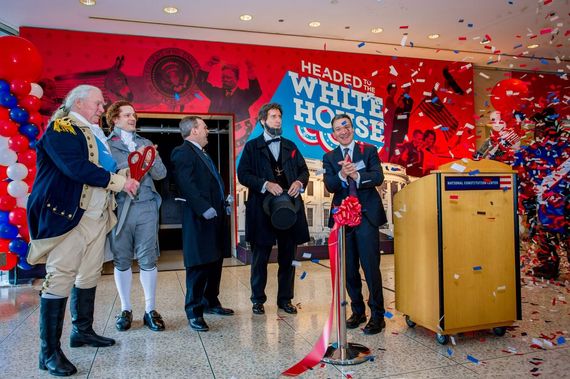 There was a time when Philadelphians and the local media were writing the obituary for the National Constitution Center (NCC) in Philadelphia. The nadir might have been when the center, which is the only institution chartered by Congress to celebrate democracy's most important document, hosted a Princess Diana exhibit. With the hiring of George Washington University Law Professor Jeffrey Rosen as President and CEO, the once flagging institution has risen like a phoenix from the ashes.

Some were initially skeptical of Rosen's hiring since he would be commuting part time from Washington DC but he has exceeded everyone's wildest expectations. To paraphrase the "Sound of Music," "The center is alive with the sound of the Bill of Rights/ With debate about fundamental laws that were written 226 years ago."

Rosen, who is a graduate of Yale Law School, is the first constitutional scholar to lead the NCC. He recently wrote "Louis D. Brandeis: American Prophet," which the New York Times hailed as an excellent book about the Supreme Court Justice. Rosen has been dragging the 226 year old document kicking and screaming into the 21st century with podcasts such as Gawker V. Hulk Hogan in which 2 experts examine the tension between freedom of the press and the right to privacy. Under his stewardship, the public can enjoy the constitution as an interactive experience. With a click of a button, one not only learns about the constitutional definition of freedom of speech, but constitutional experts on both sides of the issue explain related corollaries such as the Supreme Court Citizens United decision which ruled that free speech included campaign donations. 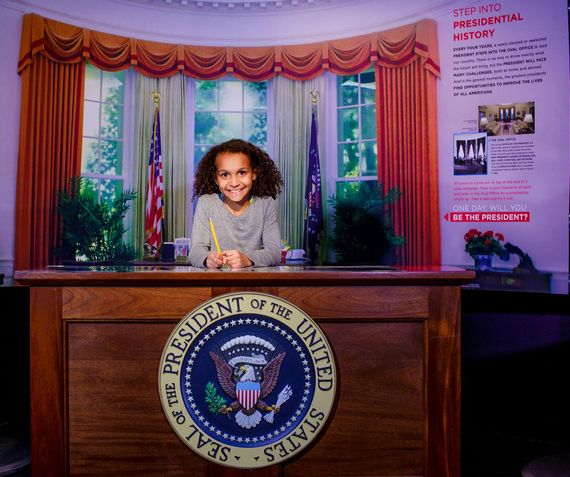 The institution is currently hosting the exhibit, "Headed to the White House," which allows you to experience both the campaign trail and the Oval Office in this historic election year. Former President Bill Clinton's political career was inspired by meeting President John F. Kennedy in the Rose Garden. Who knows how many young children will be encouraged to think about a career in public service after sitting behind the desk in the NCC's replica of the Oval Office?

Philadelphians previously typically paid attention to the NCC once a year when the Liberty Medal, which some have called a precursor to the Nobel Peace Prize, was awarded. To commemorate the 150th anniversary of the 13th, 14th, and 15th amendments to the Constitution, collectively known as the Reconstruction Amendments, Congressman John Lewis, the civil rights icon, was selected to receive this year's Liberty Medal on September 19, 2016. Lewis is still fighting for his community. He was the inspiration for this week's Congressional sit-in over gun safety laws.

There is an electric buzz about the center now. On a typical night at the center, the programs feature legal giants such as former Federal Appeals Court Justice Michael McConnell, who was on the GOP shortlist for the Supreme Court, Eric Posner, the 4th most cited legal scholar in the United States, and former US Solicitor General Ken Starr, who's perhaps better known for the Starr Report that detailed Monica Lewinsky's relationship with Bill Clinton. Starr revised a highly contentious piece of American history when he expressed regret for his zealous prosecution of Clinton during a NCC panel discussion about the Presidency and the Constitution.

At a time when political debate has become so rancor, the nonpartisan institution is the rare national institution that attracts a wide array of luminaries from the entire political spectrum. They range from Mark Holden, General Counsel and Vice President of the right leaning Koch Industries, to the head of the Libertarian Cato Institute Peter Goettler, to Ann Marie Slaughter, who served as Director of Policy Planning at the State Department under Hillary Clinton. Representatives from tech companies, who have just begun to grapple with their First Amendment responsibilities, are participating in debates over their media status. In an explosive debate, University of Chicago Law School professor Geoffrey R. Stone challenged the assertion of Monika Bickert, global head of policy for Facebook, that Facebook is not a media company.

NCC's current programs are regularly sold out because Rosen chooses topics ripped from the news and doesn't shy away from controversy. This week, the Supreme Court essentially slapped down President Obama's use of an executive order for immigration. Last month, NCC sponsored an Oxford style debate, with Intelligent Squared US, on whether President Obama has usurped Congressional power. Michael McConnell, director of the Stanford Constitutional Law Center, and Carrie Severino, chief counsel and policy director of the Judicial Crisis Network, argued that Obama had, in fact, wrested authority from Congress. Adam Cox, professor at the New York University School of Law, and Eric Posner, professor at the University of Chicago Law School, argued against the motion. Disagreeing with this week's Supreme Court decision, the audience voted that Obama has not overextended his reach.

NCC will hold a debate on abortion on June 27 that promises to be fiery. Clarke Forsythe, senior counsel for Americans United for Life, Kathryn Kolbert, who argued on behalf of the petitioners in the landmark case of Planned Parenthood vs Casey, and Mary Ziegler, author of "After Roe" are on the panel.

Perhaps, most importantly, it is taking a central role in protecting the constitution. With the current public defender and court appointed lawyer systems overburdened, some feel that the 6th amendment rights of criminal defendants are being violated. Chief Justice of the US Supreme Court John Roberts, recognizing the problem, has appointed an ad hoc committee, headed by US District Judge Kathleen Cardone, to conduct a comprehensive review of the Criminal Justice Act (CJA). When the Cardone Commission was in Philadelphia taking testimony, commission members held a lively panel at the National Constitution Center to educate the public about the possible ways to change the current funding structure for public defender's office and invited comments and recommendation. For many in the room, this experience made the constitution come alive.