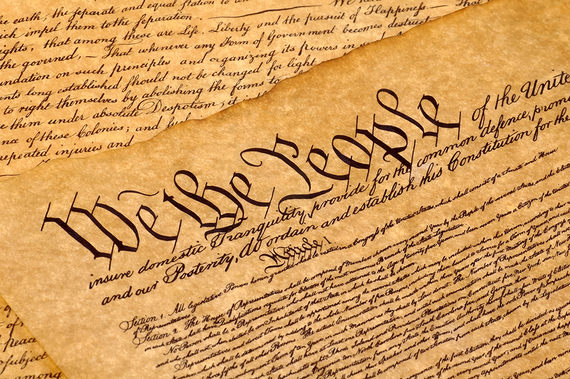 The musings of our 45th President...(This is in the Comedy section)

The Constitution is really stupid. First of all, it isn't even typed. Maybe that's why it's written on old yellow paper that looks like grandma's toenails. I don't like old houses or old ladies and now I'm adding the Constitution to that list. It's like over 200 years old. Would you drive a car that old? And look at the weirdos who wrote it. They dressed like some guy's creepy old wife -- wigs and funny socks and white powder. Probably druggies. So dumb. Probably took so long to write because they couldn't figure out what bathroom to use. What a stupid waste of time.

I'm like Truman. The buck stops with me. But I'm gonna use the 100 dollar bill. So it's more important. I make the decisions. I don't need some stupid old yellow paper when a so-called judge is trying to tell us what to do and let bad people come into our homes and kill us.

And besides stopping the terrorism, I'm going to fix the failing NFL's ratings when I come on today with O'Reilly at 4pm before the game to talk about Putin. And killers. We've got plenty of killers right here in the USA. Just go to Detroit. Play a video game with some 10 year old kids. Or visit the losers Green Room at the Golden Globes. I'll show you some bad people.

I don't like losers. I'm for all Americans. That's why the Constitution is so stupid. It was written by old dead weirdos who dress like some terrible 1980's Boy George band. How do we even know it's real? I mean, if it was really good and real it would have been written on some classy paper. So let's ban the Constitution. If not - big trouble!