The U.S. consumer price index tumbled 0.4 percent in December from the month before, the Bureau of Labor Statistics reported on Friday, led by a 9.4-percent crash in the cost of gasoline. It was the biggest one-month drop for consumer prices since December 2008, when the world was still gripped by the financial crisis. 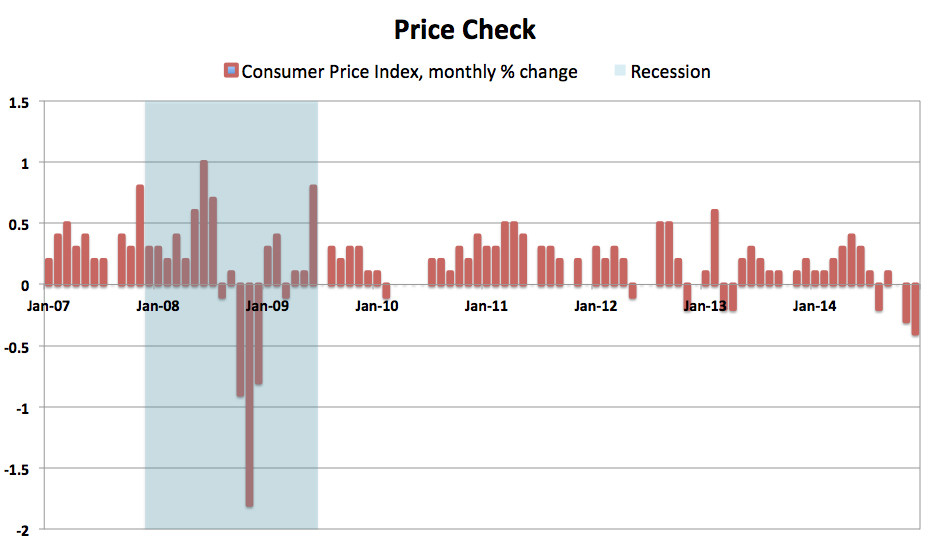 Please note the context there: Sometimes prices fall not because of angel kisses and unicorn dreams, but because everything is going to hell.

Is everything going to hell right now? Maybe not. Probably not? But some scary things are happening. The price of crude oil has been cut in half in a matter of months. The Swiss National Bank on Thursday gave up trying to keep panicky investors from buying the safe-haven Swiss franc, causing turmoil and bloodshed in currency markets. Interest rates around the world keep plunging to record lows, in a year everybody expects interest rates to rise because of booming economic growth and demand for loans.

Meanwhile, U.S. consumer prices are up just 0.8 percent in the past year, the weakest 12-month stretch since 2009. The euro zone is in outright "deflation," which is the opposite of inflation -- prices fall instead of rise. Japan, the World Deflation Champion for two decades, is tottering on the edge of it again.

Everybody loves falling prices, but sometimes we love them too much. If prices fall and fall and keep falling, then we'll put off buying stuff because we expect that stuff to be cheaper tomorrow and even cheaper the day after that. When everybody's sitting around not buying stuff, you can have what is known as a depression. Depressions are not good.

To fight off the risk of a depression, central banks around the world have cut interest rates to zero and, in some cases, less than zero, to try to get people to pull money out of banks and spend it on clothes or Google Glass or meth or something, anything.

It's working OK for the U.S., at least. The Federal Reserve got out in front of the deflation thing early and has managed to keep the U.S. economy humping along. Job growth is steady and improving, and wages might some day start rising, which could encourage people to spend more. The Fed expects this recent bout of falling prices to be temporary.

The Fed is so darn confident that all of this stuff will pass, in fact, that it's planning to start raising interest rates, pulling support away from the U.S. economy, just at the moment the rest of the world is having a bit of a moment. Should be interesting.