Medical TV shows have taught me a great deal about my future career.

House, for instance, has taught me that hospital protocol is entirely optional. It has also taught me that patients never, ever have lupus. (During a lecture on systemic lupus erythematous last week, all I could think was, "it's never lupus!")

Shows like Grey's Anatomy, Royal Pains, ER, and General Hospital have taught me that hospital supply closets exist solely so that doctors can hook up with each other. Doctors -- all of whom are attractive -- emerge from closets only to deal with bothersome patients who wake during surgery, rip out IVs, or strap bombs to themselves.

Obviously, these so-called "medical dramas" are more "drama" than "medical." It's the medical comedy, Scrubs, that sheds the most accurate light on hospital hierarchy. On Scrubs, the attending physician Dr. Cox constantly berates his residents. According to my brother, a recent medical school graduate, "This definitely happens." One part of the Scrubs hierarchy, however, is of inconclusive accuracy: I still don't know if janitors and interns actually engage in prank wars.

Given the liberties taken on medical TV shows, I expected bad medicine and pseudoscience in Contagion. But to my surprise, I didn't notice a single scientific inaccuracy while watching Contagion. I later learned that the screenwriters worked closely with epidemiologists, doctors, and scientists to create a plausible scenario about a lethal viral contagion. To the best of my knowledge, everything that happens in this movie could really happen. When the credits began to roll, I was not the only moviegoer to immediately wash my hands in the nearest restroom. I also had a strong urge to go home and take my temperature, just in case. 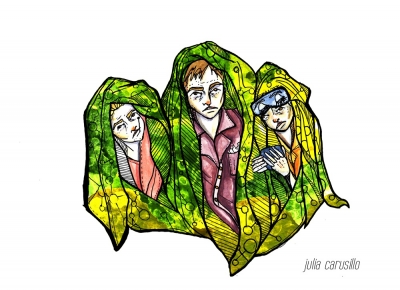 Although Contagion generated feelings of hypochondria, I found the movie's medical validity very satisfying. And when I say "satisfying," I mean I squealed with delight every time I heard a Microbiology 1650 buzzword: fomite, paramyxovirus, live attenuated vaccine, encephalitis, and pleiomorphic, just to name a few. To add to my delight, these words were being uttered by A-list actors like Damon, Fishburne, Law, Paltrow, Cotillard, Winslet, Martin, Gould, Ehle, and Cranston. Be still, my heart! Be still, my uncontrollable nerd-like tendencies!

Aside from sound medicine, a few other aspects of Contagion were pleasing to me. First of all, it's always great to see Chicago on the big screen. The movie takes place place in a dozen cities, but Chicago is a key player nonetheless. Suburbia makes a contribution to the film, too: Matt Damon's supermarket scene was shot in Western Springs.

Not only did Contagion feature my city, it also featured my lifelong role model, Dr. Sanjay Gupta. His role is but a brief cameo, but I still felt some knee-jerk idol worship when seeing him interview Jude Law's character. (After all, Dr. Gupta is an Indian-American doctor-journalist.) And speaking of personal role models, I was happy that several of the heroes of this film are female scientists, played by Hollywood starlets. These characters shine not only for their beauty, but also for their brains and bravery. The ultimate triple threat.

Despite Contagion's strengths (e.g. scientific validity, girl power), it did have a major weakness. The movie completely lacks character development. Not one of the major characters is especially dynamic. We don't learn a great deal about the characters' lives, pasts, or personalities. We don't get to see the Kate Winslet of Revolutionary Road or the Marion Cotillard of La Vie en Rose. Instead, we see that Winslet's and Cotillard's characters are extremely stoic in dire circumstances. This is admirable, but we never learn how or why they got to be so cool and collected. We never learn their stories. We only learn about their role in the spread and/or prevention of the virus. By the end of the movie, we learn more about the virus than we learn about any of the characters.

Based on Contagion and TV medical shows, it seems to me there is a trade-off in this genre: writers must choose between character development and scientific validity. Contagion chose scientific validity over character development, whereas TV dramas choose to focus on characters at the expense of accuracy. Which makes for better medical fiction? Plausibility or personality? Is it possible to have both? If I want fiction that portrays real medicine and real people, am I asking for too much?

Perhaps more importantly: does fictional medicine affect patients' perceptions of real-life medicine? After watching movies like Contagion, does the public become unduly germophobic? If I have to tell a future patient that she has lupus, will I face House-induced incredulity? And will I have to explain what really happens in supply closets? (Ahem. What actually does happen in supply closets?)

The above illustration, created by Julia Carusillo, is called "Three Little Sicklets." To see more of her work, check out juliacarusillo.com and ohsaladdaily.tumblr.com.