Not too long ago Holland Cotter, in his New York Times article "On an Island, Worker Bees Fill a Long White Hive" (May 4, 2012), quipped about the ubiquity of sameness, "nonstop visual chatter" of the new, international "art-industrial hive" in which the artist are "worker bees." The product of their labor is predictable and safe and, as a result, predictably boring. If I understood the critic's complaint correctly, his underlying problem with this globalized sameness was that art created with the aim of slam-dunk art fair success ceases to be innovative, exciting and inspiring. That is to say, it ceases to be art.

The reasons behind this sort of "globalization" or "art fair(ization)" are complex, and I will not attempt to tackle them here. What I would like to do is to suggest looking for art outside the art-industrial hive where those who, for whatever reason, are not compelled to conform, are free to create work not doomed to sameness. I was lucky to come across two such artists here in Phoenix, Arizona, or to be more geographically precise in the Village of Paradise Valley -- an enclave of natural beauty that stands up to its name. The two artists also happen to be very good friends who originally met in the 1980s, and became very close in the last decade. Interestingly enough, neither comes from Arizona, or the United States, for that matter. Geny Dignac is from Argentina, Rotraut Klein-Moquay, was born in Germany, and lived and worked in France before relocating to the U.S.

Dignac is a light and fire artist, her early fire, light and temperature pieces date back the late 1960s, culminating with the "Fire Gestures" in the 1970s. These momentary works survived though photography and videography, but even in this mediated form, Dignac's affinity with the elemental force of fire is evident. In the fire pieces she is at once manipulated by the fire, which she sees as "innate," and is in possession of it: "I can travel with it, let it go, bring it back," says Dignac.

The four elements are a shared fascination of the two artists. Dignac's 1969 48-foot-fire sculpture created on the summer solstice of June 21st, chimes with Rotraut's galaxy paintings made during the full moon. In the words of New Realism's participant and theorist Pierre Restany, Rotraut' distinguishing traits as an artist are her "oneness with nature and sense of universal harmony." (Interview for Galeries Magazine, December 1987-January 1988). Her gestural galaxy paintings, large-scale special compositions, straddle the liminal space between abstraction and representation. They are part of a totality that she sees as a single painting, a vessel for "imploding, exploding energy." In a tradition that spans from Romanticism Rotraut's paintings manifest Nature's force.

Beyond the cosmic and the elemental, the work of both artists is very much process driven. Rotraut's early two-dimensional works made in the medium she refers to as "pâte" -- flour paste -- moved her in the direction of high relief paintings and, eventually, sculpture. The sculpture grew in size as the time went on, taking on architectural proportions. Another "process discovery" came as Rotraut engaged in the Arpean exercise of cutting colored paper, this brought about her organic abstraction paintings. In turn, Dignac's experiments with paint, vinyl and acetate in the mid-1960s led her to discover acrylic, which became Dignac's medium of choice. Her compelling minimalist light sculptures, which she began making in around 1970, have since grown in size as well.

Rotraut's insistence on enjoying "freedom in all forms of expression," and on working "without worrying what others are doing" is symptomatic of the mature, in every sense of the word, attitude that she and Dignac have. Moreover, Dignac's and Rotraut's emphasis on the intuitive, that according to both artists must supersede the cerebral, liberates their work from the need to conform or to compete. At the same time, far from being just local artists, these truly international septuagenarians have exhibited extensively, their work held in museums and collections all over the world. I have just come across Rotraut's work in Art Basel 43. (And, if Rotraut's name sounds familiar this is probably because her formative years as an artist were spent by the side Yves Klein, to whom she was married until his untimely death in June of 1962).

To be sure, the sad predicament of art fair sameness described by Cotter has no simple remedy -- the relationship between today's art market and the state of today's art leaves even insiders puzzled. But maybe something can be gleaned by looking at the work of those who know better; of those for whom making art is more of an élan vital than an "art practice."

For more information on these artists please visit:
www.genydignac.com
www.rotraut.com 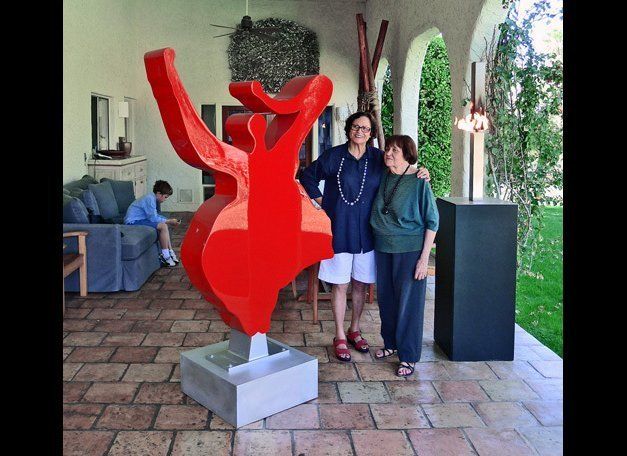