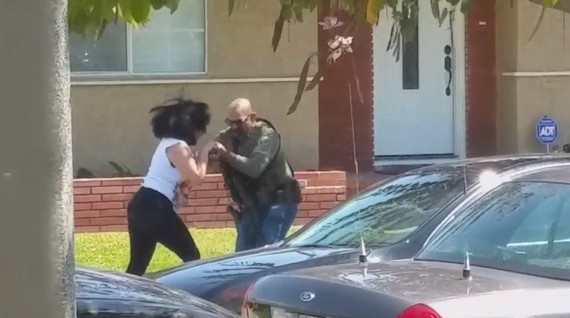 Don't Be a Victim of Contempt of Cop. photo courtesy latimes.com

Beatriz Paez is just one of the many recent victims of what I like to call "Contempt of Cop"; fortunately, Paez lived to talk about her encounter.

Ms. Paez witnessed plain clothes officers detaining several individuals at gunpoint and decided to record the incident on her cell phone. One of the officers, a U.S. Marshal, told Paez to stop recording and when she failed to obey his order the unidentified marshal charged towards her; snatched her phone out of her hand and hurled it to the ground. But he wasn't done - the marshal then stomped on the phone and punted it down the sidewalk. Luckily, Paez had someone else recording her as she recorded the officers.

As a retired twenty year veteran sergeant of the Los Angeles Police Department (LAPD), I understand that some police officers have an absolute expectation that if they tell you to do something, you better. When you don't, sometimes, there is a price to pay.

Police Officers have tremendous power. That small group of officers who have garnered so much of the public's attention lately have the ability to take hours out of your life as in an unlawful detention on a Friday followed by a weekend in jail if the individual does not have the financial wherewithal to make bail. An errant officer could cost someone hundreds or maybe thousands of dollars by issuing a traffic citation and towing your vehicle. An over zealous officer can stop you, drag you out of your car, beat you up, requiring expensive follow-up medical treatment once released from jail on that bogus "resisting" arrest and battery on a police officer charge or you just may end up losing your life.

Contempt of Cop is not real you say? Ask Floyd Dent of Inkster, Michigan, who was recently exonerated of all charges after he had been brutally beaten by [fired] Inkster Police Officer William Melendez aka RoboCop after Dent allegedly committed a traffic infraction. Melendez has been charged with two felony counts. Ask Mario Givens who was yanked from his residence by fired SC Officer Michael Slager; investigating a burglary at Givens' home. (The same Slager who killed Walter Scott during a traffic stop.) Givens was tasered and booked for "resisting" arrest when Slager decided Givens did not really live there. The charge was later dismissed.

These incidents are sadly commonplace. Police initiate a traffic stop or their other favorite -- an investigative stop; escalate a seemingly benign encounter to a use of force incident and then arrest the citizen for either resisting or battery on a police officer. Both of these charges are difficult to refute without the benefit of a video recording.

Here are just a few more examples of contempt of cop. Remember Marlene Pinnock, the homeless grandmother walking along the Santa Monica freeway in Los Angeles and former CHP officer Daniel Andrew who straddled Pinnock MMA-style and punched her repeatedly in the face and head when she failed to obey his order. CHP paid Pinnock $1.5 million. San Bernardino County Sheriff's recently paid Francis Pusok $650,000 after Pusok attempted to evade officers on horseback. They were the lucky ones.

Tragically, 52-year-old Walter Scott, during a traffic stop for a broken third tail light, exited his car and ran on foot eluding 32-yr old [fired] officer Michael Slager and paid with his life. Apparently, when you run from a police officer and as in this case and the officer lacks the physical stamina to catch you - five shots to the back is the penalty.

Need More proof? Eric Harris ran from Tulsa City Deputy sheriff's during an undercover sting operation and was told as he [Harris] took what were probably his last breaths by one of the deputies, "you f*cking ran". So, let's be clear -- if you run from the police there is a price to pay. Gun dealer or not -- when did police become judge, jury and executioner?

I could go on and on. Contempt of Cop is real. There does not appear to be any other explanation for the loss of life in these next incidents. Ezell Ford, a mentally ill man in Los Angeles who did not want to "talk" with LAPD gang officers during an "investigative stop"; Kelly Thomas, another mentally man who was beaten by a [former] Fullerton Police Officer who was reportedly overheard saying, "I'm gonna f*ck you up" as he placed black leather gloves on his hands and Freddie Gray in Baltimore, an alleged "career criminal" made eye contact with an officer and then ran; Gray died from a partially severed spine and broken vertebrae. Career criminal or not -- you don't get to kill him officer.

My thoughts: Bad police tactics can lead to bad shootings. Poor planing and a lack of communication between partner officers can lead to excessive force or even deadly force. An inability to empathize and relate to the community served can also lead to devaluation of a human life.

During my twenty year career, while working south central Los Angeles, I had my fair share of alleged criminals run from my partner and I. That's what criminals do; most don't want to go back to prison. So if an officer understands that fleeing suspects are inherent to police work; officer, get ready to exercise officer. Why would an officer feel justified in shooting someone simply because they ran? I'll tell you why - because these officers have been able to get away with murder; literally. Police Chiefs circle the wagons, the department begins to craft a[fish] tale and then the victim/suspect is vilified.

Bad guys do bad thing; I get that. Whether a suspect is a so-called "thug", a drug user, a gun seller or just dumb in public [for running] - police officers should not be allowed to shoot and maim or kill them on the spot for a perceived slight.

I understand that if sense was common everybody would have it. I understand that common sense is not something that can be taught. I understand that compassion and empathy is not a learned behavior. That's who you are at your core. Police officers found wanting in this regard should be plucked from the rank and file and banned from serving on another police department. Recurring and intermittent psychological evaluations might help identify those troubled officers. Let's start there.