On Memorial Day we remember those who shed their blood, sweat and tears to make the United States of America the most beautiful country in the world. We are not perfect, but no other nation ensures the vast array of rights and freedoms that the American people enjoy. I am proud that the members of our Armed Services hail from every reach of the nation and represent a multitude of cultures and races, united as one in the mission of defending America and our democratic values. Our men and women in uniform are the force that allows us to continue our pursuit of a more perfect union.

However, this cohesive, multi-racial military has not always been a reality. For many years, Black soldiers fought in segregated regiments. While they were fighting to defend America, America was not fighting to defend them. Our community should be proud to be home of the 369th Infantry division, an all-Black army unit from Harlem. The division fought for the sake of its country in the battles of World War I despite the forces of racism. These men quickly gained respect and earned the nickname, 'The Harlem Hellfighters,' because they "gave the Germans hell" for six months, perhaps the longest of any American unit during the war. The true value of Black men and women in the Armed Services was presented on a global stage.

I have no doubt that their valiant service inspired the Tuskegee Airmen to prove their patriotism and heroism in World War II. Black pilots were prohibited from serving until 1941, when a group of brave men completed their training at an airfield near Alabama's Tuskegee Institute. In the midst of oppressive Jim Crow laws which held a grip on nearly all of the Armed Forces, the creation of the segregated 99th Fighter Squadron advanced the fight towards a racially integrated military.

The squadron was activated on March 22, 1941, and entered into combat over North Africa in June of 1943. The men flew their aircraft in more than 1,500 missions; a record unmatched by any other unit during the war. They returned home with one hundred and fifty international medals of recognition. The unit was deactivated in 1946 but its undeniable achievements moved the hearts of the American people.

Decades later as a Congressman, I was tremendously honored to sponsor a bill that granted the official charter for the 369th Veterans' Association honoring the Harlem Hellfighters, and another that awarded the Congressional Gold Medal to the roughly 300 surviving Tuskegee Airmen. The highest acknowledgment of their service was well-deserved and long overdue.

These men ultimately had cleared the path for a young high school dropout from Harlem, to become a United States Congressman. The service of the Harlem Hellfighters allowed for the Tuskegee Airmen which accelerated the desegregation of the military in 1948, and led to my service in the Korean War. None of this would have been possible without their contributions. The efforts of a generation pave a better future for the next generation.

This past February, I had the privilege of attending a Black History Month observance organized by the Army and Congressional Black Caucus. There were three legendary Tuskegee Airmen in attendance. Just like the Harlem Hellfighters, the three airmen had fought for America abroad, while America subjected them to bigotry and discrimination at home. Also in attendance, was a group of young Army cadets. Like me, they expressed their reverence for the Tuskegee Airmen and the inspiration they received from being in a room with these legendary heroes. I was moved by the fact that one event contained multiple generations of men, all motivated by the common goals of protecting our home, a sense of duty to our country and a desire to continue the work of our predecessors. Many have come before us, and many will follow; the well of selfless American servicemen and women will never run dry. And the pursuit towards equality shall continue.

Though we have made tremendous progress in integrating today's Armed Forces, social inequality still persists among the Black veterans community. According to the Bureau of Labor's 2015 annual averages, the unemployment percentage of 18 and over Black Americans who served in the Armed Forces (7.6 percent) is almost double than that of white persons (4.0 percent). Further, about 40 percent of homeless vets are Black or Hispanic, according to the National Coalition for Homeless Veterans, while Blacks and Hispanics account for just over 14 percent of the veteran population. These valiant Americans have given too much, only to arrive home and fail to gain adequate employment, educational, or medical benefits. Memorial Day should be a reminder to focus our attention and efforts towards the few who sacrifice so much to protect so many. We must keep fighting to guarantee that the needs of all our returning veterans are properly addressed, regardless of race. I believe that is the best way to continue the legacy of the Harlem Hellfighters. 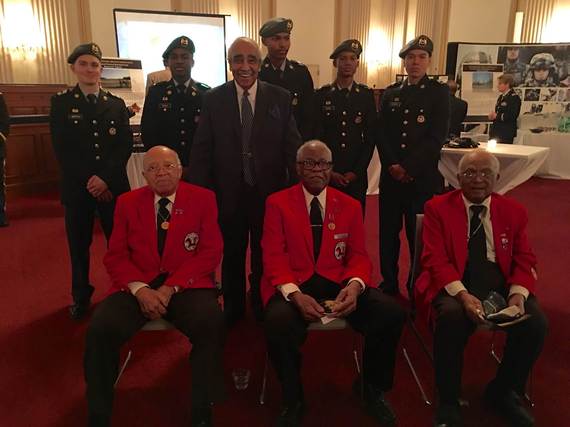