I'm standing in a drab, monochromatic police department TV set in Vancouver that could quite feasibly serve as the base for any number of procedural police dramas on the air right now. Except this particular police show has something none of the others do: a foxy cop from the future. Yes, the cop and sci-fi genres have been melded together for the hot new summer show "Continuum," set to debut on Showcase this week.

The show follows Keira Cameron (Rachel Nichols, "Criminal Minds"), an officer with the Vancouver City Protective Services (CPS). We first meet Keira in 2077, when she's a regular "protector," wife and mother going about her business. When she's placed on guard duty during a mass execution of seven terrorists, she's jolted 65 years into the past when the prisoners deploy a high-tech, time-travel escape. She's disoriented -- to say the least -- when she finds herself in the year 2012.

"To have a big idea that was produce-able, I had to set it in the present," explains Simon Barry ("The Art of War"), the show's creator and executive producer, from behind a remarkably tidy detective's desk on the set. That doesn't mean we don't get to see any more of 2077. We steal plenty of glimpses of the future through Keira's memories, which she's able to download and replay at will. (Future cops don't need to carry notepads in this incredibly plugged-in culture!)

When Keira realizes she may not be able to get back to the future, she devotes all of her energy to hunting down the terrorists who trapped her in the past, including Travis Verta (Roger Cross, "24"). She impersonates a cop, infiltrates the local police department, and gets partnered up with hunky Carlos Fonnegra (Victor Webster, "Mutant X," "Castle").

Keira does wind up with one unlikely confidante in 2012: Alec Sadler (Erik Knudsen, "Scott Pilgrim"), a teenager who created the software she uses to communicate almost telepathically with. (In 2077, Alec is kind of a big deal. Like, Bill Gates or Steve Jobs big.)

A little bit lost? Don't worry. We've compiled a list of the top 12 things you need to know about "Continuum," with a little help from Nichols, Webster, Cross and Barry.

1. In 2077, corporations rule the world instead of governments. Keira thinks this is a good thing, while the terrorists disagree. "We [the terrorist characters] believe the corporations are wrong," says Cross. Adds Barry: "We didn't create a world that's black and white." 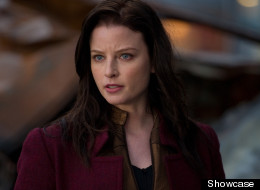 2. The escaped terrorists may not be entirely bad guys, depending on who you ask. "[My character] is called a terrorist because he might do a bad thing like kill a few people or blow things up," says Cross, laughing. "I've had to do some nasty things." It's all in the name of preserving democracy, though, so he says you just may wind up rooting for him and his gang.

3. You won't see any flying cars in the 2077 scenes. In fact, you'll hardly see any cars at all, thanks to a fuel shortage.

4. Water is scarce in 2077, too, so running water is almost unheard of. (Which is why Keira is so fascinated by the otherwise unremarkable facet in her drab 2012 hotel room).

5. Alec can "get inside" Keira's head anytime, thanks to the software he created that she has come to depend on in 2077. This can be both helpful and annoying, like when she's trying to get undressed at the end of the day.

6. Keira's special suit is equipped with a HUD, or Head's Up Device, that lets her scan stuff and see through people's eyes (it also allows Alec to see through her eyes). In later episodes, the suit starts to fall apart. "Rachel would like the [very tight] suit to go away, but Keira wants it back!" says Nichols, laughing. 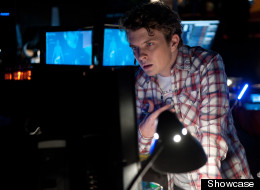 7. Keira is exposed to plenty of things she's never seen before in 2012, like pizza, fresh fruit and even horses. "There's a lot of fish-out-of-water stuff," says Nichols.

8. Carlos knows something is a bit off about Keira, but he doesn't know what. (After all, it wouldn't exactly occur to most people that someone has time-traveled from the future.) "We're still tippy-toeing around a few issues," says Webster. "Carlos is perplexed at times and he's not afraid to show it."

9. Aside from the skin-tight suit, don't expect to see Nichols prancing around in sexy little numbers. "Victor gets to do all the fun eye candy stuff [like a shower scene] and I get to kill people!" says Nichols.

10. Some of the escaped terrorists, like Cross, are genetically enhanced because they formerly served as "super soldiers" for the ruling corporations. "We can kick anyone's butt," says Cross.

11. You can expect to see a lot of intense action sequences on the show. "Our fight scenes are dirty and gritty and real," says Webster. Nichols agrees. "Kimani Ray Smith is our stunt coordinator, and he's fantastic. He can speak stunt-speak to humans and we understand," she says.

12. Cross and Webster disagree about whose character would win in a fight, if such a scene ever came to fruition. "I'm a super soldier. I could pick him up by the neck and snap it!" says Cross. Webster begs to differ. "I would out-smart him!" he says, laughing.