If it weren't for the fact that the Washington media establishment is gamed in favor of Republicans, it's very likely that they would have long since been relegated to nothing more than a LaRouche-style crackpot cult, handing out mimeographed pamphlets outside the post office.

How else, other than via the self-conscious deference afforded it by the press, do the Republicans get away with issuing the following two press releases within a single 24 hour span:

Sunday: "Cutting Medicare is not what Americans want."

In case you're wondering, these statements didn't come from one of the many far out wingnuts like Steve King, Michele Bachmann or Virginia Foxx (Medicare recipient). They were, in fact, dispatched from Senate Minority Leader (And Real-Life Albino Sleestak) Mitch McConnell's office. Yes, the highest ranking Republican in Congress wrote-up both headlines, ostensibly proof-read and unapologetically shoved into the public record.

As we have observed over the years, this Republican contradiction problem has been a feature of modern Bush Republicanism for a while now, but it's only during the past year that the gap between contradictory statements -- let's call it the Wingnut Gap -- has narrowed down to just 24 hours. Prior to this week, it took several years for, say, the Republicans to contradict their "criticizing the commander-in-chief during wartime undermines the troops" mantra, or for Glenn Beck to accuse the Obama administration of being Maoists then to inexplicably suggest that America needs to be "more like the Chinese."

Say nothing of the contradictions evident in Sarah Palin's America-hating commie Castro headgear: 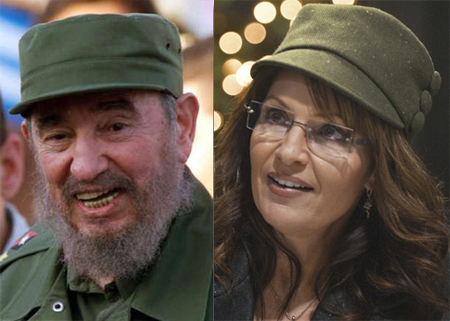 And don't give her the benefit of the doubt on this, either. She's not smart enough to wear it with deliberate irony.

But this is a dynamic that's most prevalent when the Republicans discuss Medicare. It really flummoxes them. After all, they despise socialized medicine. They despise single-payer health insurance. They despise government-run health care. They voted against the formation of Medicare during the high water mark of LBJ's Great Society. They ultimately would love to privatize (or drown in a bathtub) the whole thing and be done with it.

Yet at the same time, 55 Republican members of Congress are on Medicare. Congressman Weiner wrote up a list that includes Mitch McConnell. I could be wrong, but I also think proxy-Republican and anti-government-run-insurance drama queen Joe Lieberman, at 67 years old, receives Medicare. He's eligible. Additionally, I'm still attempting to ascertain how many Republicans get their primary care from the government-run Office of the Attending Physician. The office won't give me a partisan breakdown of their patients, but we can safely assume that, based on ideology, it's all Democrats, right?

Today, embattled Republican David Vitter spoke in favor of Byron Dorgan's Canadian drug-importation amendment and, in the process, praised the Canadian system -- which is, as you know, single-payer. However, Olympia Snowe said she doesn't support the Gang of 10's Medicare buy-in compromise, but she supports the Canadian importation measure. So she's siding with the rank and file Senate Republicans against single-payer health insurance on the buy-in, but she supports the single-payer system on the drug importation amendment. And it's not just Snowe and Vitter. The congressional Republicans are all toeing this upside-down We Hate-Slash-Love Medicare position.

No wonder the teabaggers and dittoheads are screeching in gibberish -- steam shooting from their ears. When it comes to Medicare, they have no idea what to support or how to support it. All they know is that President Obama should keep his government hands off their Medicare -- whether or not they understand that the government, in fact, runs Medicare. He just should. So there.

But expecting logic, reason and consistency from the Republicans is wasted time. (See also Fox News Channel's Rasmussen poll analysis showing a total of 94 percent of Americans think climate scientists falsified their evidence, while 26 think they didn't, thus indicating a total of 120 percent.)

The fact remains that the private health insurance system is broken and America is being left behind by the rest of the world as we cling to the decaying wreckage of a failed healthcare system. Medicare is an obvious solution.

If Medicare works for senior citizens, then it can work for everyone else. Expanding the revenue base for Medicare by upwards of 2 million Americans with this buy-in plan, allowing a younger, healthier and, consequently, less costly population to buy into the system by paying the full, unsubsidized premiums, will only help to ameliorate Medicare's fiscal problems. Likewise, widening the buy-in window to include all adults would ultimately stabilize Medicare even further, because we'd ostensibly be adding even younger and healthier people to the pool, allowing chunks of their unused premiums to flow upwards to older, sicker recipients who need it.

And if you, Mr. and Mrs. Republican, are against a Medicare option for everyone, then you have to be against Medicare period. And feel free to be against it. You just can't have it both ways -- no matter how ridiculous and contradictory your congressional leadership is.

Adding... In honor of Copenhagen, I give you this: