A controlled burn of surface oil from the British Petroleum/Transocean's Deepwater Horizon is scheduled to begin Wednesday afternoon, April 28. The strategy is designed to minimize environmental risks by removing oil spilled into the Gulf of Mexico following the April 20 explosion. The plan involves consolidating oil into a fire resistant boom approximately 500 feet long. This oil will then be towed to a more remote area, where it will be ignited and burned "in a controlled manner," according to incident command. The plan calls for small, controlled burns of several thousand gallons of oil lasting approximately one hour each.

"No populated areas are expected to be affected by the controlled burn operations and there are no anticipated impacts to marine mammals and sea turtles. In order to ensure safety, the Environmental Protection Agency will continuously monitor air quality and burning will be halted if safety standards cannot be maintained," according to the command website and official remarks.

U.S. Coast Guard Rear Adm. Mary Landry, Minerals Management Service Gulf of Mexico Regional Director Lars Herbst and representatives from the Department of Fish and Wildlife, British Petroleum, Transocean and the State of Louisiana met with media by phone and in Roberts, LA to discuss the Deepwater Horizon Well explosion on Wednesday afternoon.

Landry told media, "I have not been sugarcoating this. It is premature to say it is a catastrophe, but I will say it is serious."

The latest forecast maps indicate that some of the oil will likely reach land if the current pattern of SE winds continue. This would impact the Mississippi Delta area. A situation map produced after a flyover at 7 pm Tuesday shows the spill within 23 miles of the lower Delta, between Morgan City and New Orleans. 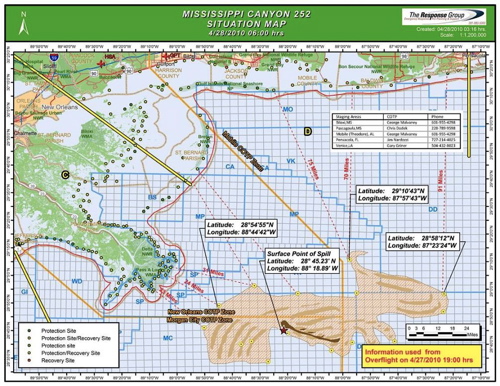 To date 100,000 feet of boom containment is in place along threatened shorelines, officials say. 25,000 gallons of dispersal agent has been applied to the slick and incident teams have collected 4,000 barrels of an oil/water mixture. Gulf Minerals Management Director Lars Herbst says that an undersea collection chamber will take 2-4 weeks to complete, but that drilling of a relief well will begin on Friday. As far as controlling and stopping the leak, Herbst said he does not expect it to happen "anytime soon."

There is already some debate as to the size and volume of the leak. The Coast Guard originally estimated that the well was leaking 336,000 gallons (8,000 barrels) of oil per day, but have since revised the estimate downward to 42,000 gallons (1,000 barrels). Basing estimates on available satellite data and projections charts from the Minerals Management Office, some remote sensing experts believe the actual leak may be closer to the original estimates.

No matter the exact numbers, this is a serious spill, as Landry says. On Sunday, Aaron Viles, Campaign Director of the Gulf Restoration Network flew over the spill and did not like what he saw. Most distressing was the sight of a sperm whale within the sheen area. This was confirmed at today's press conference where environmental officials said at least seven whales were seen in the impact area.

"It's critical that NOAA, the Coast Guard and U.S. Fish and Wildlife Service, along with their state partners in Mississippi and Louisiana significantly scale up their efforts to monitor, asses, and mitigate the spill impacts on marine wildlife, both in the short and very long term. BP is footing the bill, but we need to make sure the federal and state agencies are demanding and receiving the resources they need to protect the Gulf," Viles says.

Reacting to plans to lower a containment dome, Viles is skeptical.

We have a report that the first efforts by the remote operated sub to close the blowout preventer valve have failed, but that efforts continue. If the valve fails to function, we are left with two more steps to contain, and then stop the spill. First, positioning an underwater dome over the spill site, to allow BP to vacuum up the oil more effectively, while more drilling rigs are brought into the area to drill relief wells to pump in mud and concrete and seal the well. The dome hasn't ever been used at these depths though, and the timelines for the relief well option aren't attractive. The Australian spill last year took over two months to staunch, while a similar accident in the Mexican portion of the Gulf took approximately ten months to stop.

As of Tuesday morning, the oil slick was reported to be 80 miles across and 48 miles long, and is visible from space. 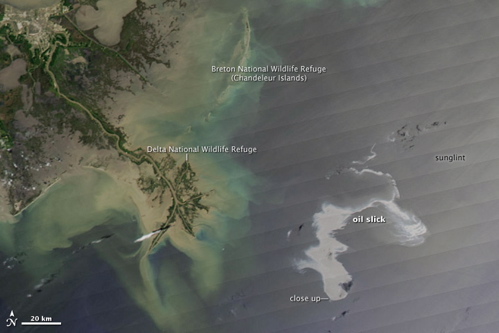 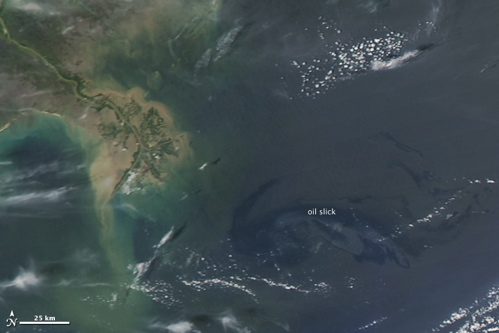 The New York Times reports that a year ago, BP Gulf Production vice-president Richard Morrison suggested that voluntary safety standards were sufficient. "We are not supportive of the extensive, prescriptive regulations," Morrison said.

Walter Williams, long-time advocate of the Gulf wetlands and creator of the Mr. Bill character for Saturday Night Live, had a more colorful and exasperated take on the potential for environmental disaster. 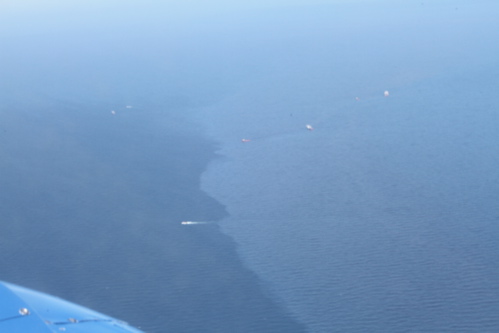 "Earth spits up hundreds of millions of years worth of dinosaurs onto our shore," Williams wrote in an email after flying the spill.