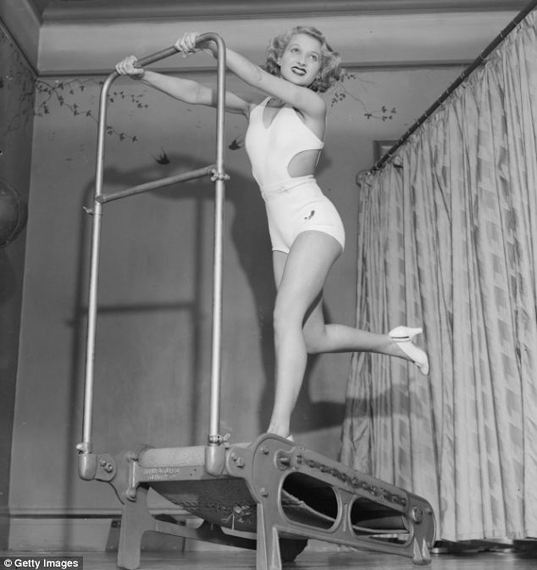 "Strong is the new skinny." "Nothing tastes as good as skinny feels." "Suck it up now and you won't have to suck it in later." Sound familiar? You can't spend five minutes on Pinterest or any form of social media without seeing these catchy little quotes layered on top of images of whatever the latest absurd mandate is to be considered beautiful or sexy.

Sometimes I wonder who the puppeteer is behind this charade. I imagine if we saw who is making up these insane standards it would be like the big revelation in the infamous Wizard of Oz. Just an ordinary man behind the curtain playing clever tricks on us (probably while eating Cheetos and drinking grape soda, laughing at us while we run around in circles eating egg whites).

Are you so lost and unsure of yourself that you've bought into this craziness? Once upon a time, I was, for sure. My life felt controlled by getting in my next workout. I adopted the belief that a day was only as good as the workout completed. Fear pressured me into working out while sane people slept. Dark streets stretched before me, lonely and cold, yet mile after mile I ran and ran until my heart told me to stop, yet even then I kept going.

I felt so superior to my peers and colleagues; I burned seven trillion calories while they drank coffee and watched the Today Show before heading into work. People probably thought I was crazy, but instead, they said things like, "Wow, I wish I had your motivation." ("See, you're superior! You have something they want but don't have the willpower to achieve," the eating disorder that ruled my life at the time said, reinforcing my efforts.) I failed to let them know that I was seeing a cardiologist over the lunch hour, due to becoming increasingly more convinced that my irregular heartbeat might be a sign of an impending heart attack at the premature age of 22.

I hold images of that girl in my head, and I just want to pick her up off of the dark curb where she sat, fearfully timing her pulse, instead of her miles, and tuck her into bed while secretly burning her running shoes. She was a lost soul, running away from the very thing she was so desperate to find - herself. Looking back now it just feels sad; certainly not superior. My identity was wrapped up in an all-consuming eating disorder, and excessive exercise was just one part of my obsessive and disordered life. Until...

Until the day, I walked by a yoga studio and observed people in odd postures. They looked really...well, serene, unlike me and all of the other treadmill junkies. I found the practice of yoga fascinating; it kept calling to me softly, "just one class," as I walked by each day. But I waited a long time to have the courage to attend a class because it meant rebelling against my eating disorder and its insistence that running was the Holy Grail. My addiction to running was much louder than the gentle whispers seeping out from under the yoga mats, following me home.

The night I finally entered the sacred space of that yoga studio is forever burned into my mind. Something shifted in me that night as I laid in savasana (corpse pose). I reconnected with a part of myself while lying on my yoga mat and I heard a quiet voice softly whisper, "You can eat now." This voice is my most compassionate self who is loving, infinitely wise, and deeply invested in nurturing me. I chanted Om three times, bowed my head while saying Namaste, rolled up my mat and walked back out into my life forever changed.

Unfortunately, I didn't abandon compulsive exercise that night; I needed a remedy much greater at the time. But little by little I started giving myself permission to listen to my body and its desire to attend a yoga class instead of torturing my injured knees on a treadmill. At some point, I laid down running entirely. Moving my body stopped feeling abusive and slowly felt like an act of self-care. Over time, I let go of the core belief that if I didn't exercise in an 'acceptable' way that something horrific would happen.

Exercise is kind and loving and very much a source of self-care when used in moderation and in ways that feel good to you. For some, that could be running, for me, it's a long walk on a sunny day with Mosley, our Golden Retriever, a bike ride with my kids, or a walk with a girlfriend where our legs try to keep up with our words. My body craves a gentle yoga class with incense burning and Sanskrit music playing; I feel at home in my body on a yoga mat. Sometimes it's a quick cardio workout with my favorite audible book playing. And many days, it's rest, because I don't need to run away from myself anymore.

Our bodies crave movement. Exercise has tremendous benefits for our mental and physical well-being, but when abused it does far more harm. It's not intended to be our only method of coping with the stress we experience in our lives.

Listen to the infinite wisdom of your body, it has all the answers you need.

If you are concerned exercise has shifted from self-care to self-harm, I would recommend taking a minute to consider a few common symptoms:

-Working out when sick or injured

-Irritability if you can't exercise

-Fearful of weight gain if not exercising

-Arranging your entire day around a workout