There has been a loud and vocal online reaction over the TIME Magazine cover on Hillary Clinton's possible presidential run. The cover features a picture of a woman's leg in a pantsuit with a miniature man hanging from the tip of her high heel with the headline "Can Anyone Stop Hillary?" For my most recent book, What Will It Take to Make a Woman President? Conversations About Women, Leadership and Power, I interviewed nearly 50 influential men and women -- Republicans and Democrats, politicians, public officials, thought leaders, writers, artists and activists -- about what factors keep women from achieving equity in leadership positions. This cover is a potent visualization of some of the concerning cultural obstacles and stereotypes that continue to hold back women and girls from positions of power.

On the TIME cover, the pant-suited leg is depicted ominously, dragging a helpless, tiny man like some giant Godzilla monster with the tagline "How to Scare Off Your Rivals Without Actually Running Yet." The choice of this image and words like "scare off" points to a problem that came up time and time again in my interviews: the conundrum of how powerful, ambitious, confident women are portrayed in a negative light as threatening or unlikable. As Lean In author and Facebook COO Sheryl Sandberg observed in our interview, "As a woman gets more successful, she is less liked by people of both genders, and as a man gets more successful, he does not take a likability hit." Not only are powerful women often portrayed as unlikable, but also as anti-man. The perilous position of the minuscule man on her heel implies that if she takes one more step forward, that little helpless man would almost certainly be crushed. What a tired and harmful stereotype that is; that somehow, women achieving leadership positions are anti-man, or that men somehow suffer when women are successful. This could not be further from the truth.

I spoke to a diversity of women and men for my book who emphasized the growing trend of supportive, vocal men who also would like to see more women in leadership positions, saying that this should not be perceived as bad for men, but rather quite the opposite. Author and sociologist Michael Kimmel put it to me this way: "The argument that I make consistently to men is that gender equality is not a zero-sum game -- it is a win-win." Journalist Nicholas Kristof told me:

In my interviews, this came up frequently as one of the overriding themes: Having more women in leadership positions should not be framed as a "women's issue," but as a matter of diversity and the need to have a more reflective and effective democracy. As Democratic Leader Nancy Pelosi puts it:

Gavin Newsom, who is the Lieutenant Governor of California, pointed out men's rightful place in the movement for greater equality:

Why is it that men can't be recognized for being outstanding advocates for women? You don't need to be gay to be a great advocate for the LGBT community. In every aspect of life, you can maintain your empathy and your advocacy... I think people are realizing that we're not two separate tribes, we're all in this together, and that men have a responsibility to be advocates for women, women advocates for men and boys.

In my interview with Gloria Steinem, she harked back to the roots of sexism and patriarchy when reflecting on the coverage of Hillary during her historical 2008 presidential run:

The deeper problem is that as children we are still raised mainly by women, so we associate female authority with childhood... And I think we saw it in the response to Hillary in 2008 when big, grown-up, otherwise adult television commentators were saying things like, 'I cross my legs when I see her. She reminds me of my first wife, standing outside alimony court.' People who would not ever say such things, normally, were saying them about Hillary, because, I would guess, deep down, they felt regressed by a powerful woman. The last time they saw one they were six years old.

If Hillary does run in 2016, I expect she'll again encounter a fair amount of sexism in the media -- this TIME cover is probably only the beginning. Because the media is so important in shaping our culture and consciousness, there is a growing imperative to closely monitor media coverage and generate public awareness. Gloria Steinem, Robin Morgan and Jane Fonda are co-founders of the Women's Media Center, which has a program Name It. Change It. that holds media outlets accountable for sexist commentary, including coverage of women candidates and political leaders (regardless of their politics). As Jane Fonda told me, "If the media was less misogynistic, less sexist, I think more women would run." Pat Mitchell, President and CEO of the Paley Center for Media and the first female president of PBS reminded us of our power as consumers:

The media must become a more self-aware, thoughtful partner in helping our culture move to a place where women leaders are portrayed fairly and positively, so that women and girls can be encouraged to strive for those roles, and men and boys can see women as leaders. We will all benefit from a more equal society where everyone's voices are represented and our humanity is not constricted by destructive gender stereotypes. 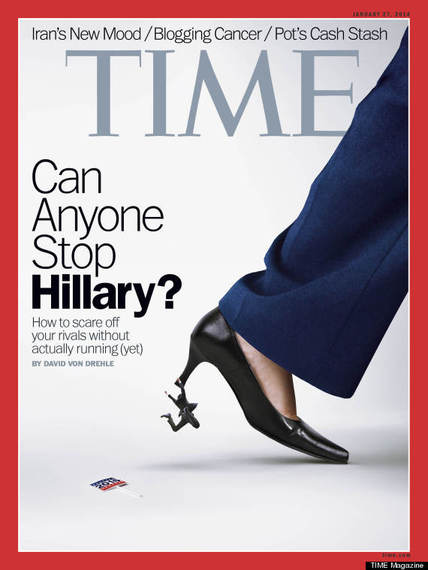 Marianne Schnall is a widely published writer and interviewer whose writings and interviews have appeared in a variety of media outlets including O, The Oprah Magazine, CNN.com, EW.com, the Women's Media Center and many others. Marianne is a featured blogger at The Huffington Post and a contributor to the nationally syndicated NPR radio show, 51 percent The Women's Perspective. She is also the co-founder and executive director of the women's website and non-profit organization Feminist.com, as well as the co-founder of the environmental site EcoMall.com. She is the author of Daring to Be Ourselves: Influential Women Share Insights on Courage, Happiness and Finding Your Own Voice based on her interviews with a variety of well-known women. Marianne's new book is What Will it Take to Make a Woman President? Conversations About Women, Leadership, and Power. You can visit her website at www.marianneschnall.com.