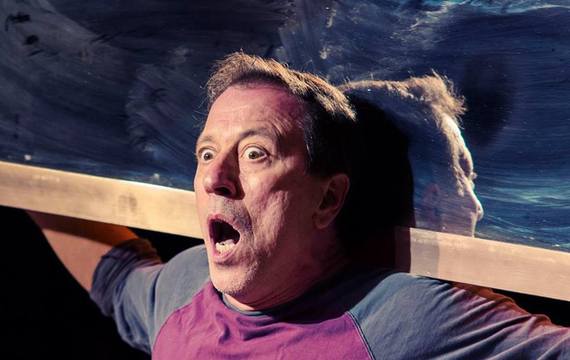 This Saturday, July 18, Brand Library & Art Center in Glendale, California presents a free screening of the yet-to-be-released documentary John Fleck Is Who You Want Him To Be which delves into the work of controversial performance artist and award-winning actor John Fleck.

Fleck, a radical gay performance artist, gained notoriety as one of the NEA Four, a quartet of artists-Fleck, Karen Finley, Holly Hughes and Tim Miller-whose National Endowment for the Arts grants were vetoed by agency head John Frohnmayer in 1990 at the height of the AIDS crisis.

The NEA reversed funding to these artists who utilized body imagery and radical forms of expression to make art that confronted the government's reluctance-fueled by fear and apathy-to deal with the AIDS crisis. Fleck and his compatriots fought back, and the face of public funding for the arts changed forever, with the Supreme Court ultimately upholding a vague "decency clause" on government arts funding that still limits our freedom of speech today. At that very different and extreme time, much concern was expressed about "the chilling effect" the decision could have on our culture.

Fleck has since gone on to win four LA Critics Circle Awards, eight DramaLogue, seven LA Weekly and two Backstage West awards, all for outstanding performance, and has appeared in numerous films and televisions shows, including most recently, True Blood.

Now the film, John Fleck Is Who You Want Him To Be, which intercuts archival video and current footage from a range of performances and an interview with Fleck, appears to be caught in a chilling effect of its own because of its content, not unlike his piece twenty-five years ago.. According to an email exchange between the film's director, Kevin Duffy and Frameline San Francisco International LGBTQ Film Festival, the longest-running and largest queer film festival in the world requested a copy of the film for consideration.

As reported on Back2Stonewall, just days before the festival, Duffy learned the film would not be shown, even though Frameline claimed to "love it." Further queries by Duffy led to him to learn that that the reason was the film's "construction." In an interview posted on Duffy's Facebook page, Penelope Boyer, who worked for the National Association of Arts Organizations, a co-plaintiff in the NEA 4 Supreme Court case, says:

Construction is a veiled term for content, and content in this case refers to content that was controversial and that angered and frightened John Frohnmayer, the chairman of the NEA twenty-five years ago. It is this same content that is frightening a queer film festival now.

Despite Frameline's rejection of John Fleck is Who You Want Him to Be, Duffy has screened the film at California State University, Long Beach and California Arts Institute, and on Saturday, July 18 will showing the film, with question and answer following, at the Brand Library & Art Center, in Glendale, CA. The screening marks start of a Kickstarter campaign to raise funds for the film's licensing and distribution. The reception at 6:30 pm will be followed by the 7:00 pm screening and discussion with the artists. Admission is free and open to the public (18 years of age and older, due the mature subject matter). Complimentary parking is available in Brand Park adjacent to the library and an accessible entrance and parking is available on the east side of the building.

A longer version of this appeared on Back2Stonewall.com.
Photos by Kevin Duffy, used by permission