Brewing beneath the surface of every popular Wikipedia page is a minor war. Wikipedians bicker with each other in hidden "Talk" pages about word choice and bias and, if a debate gets particularly contentious, one editor may edit over another editor's work.

That, say the authors of a new study on Internet's most popular encyclopedia, is the best proxy for how controversial an article is. A group of researchers from Hungary, the UK and the U.S. determined the "controversiality" of a Wikipedia page "by focusing on 'reverts', i.e. when an editor undoes another editor’s edit completely and brings it to the version exactly the same as the version before the last version." Wikipedia's most controversial articles cover most of the subjects that engender controversy at the dinner table: religion, philosophy and politics.

The study includes some incredible graphics, a few of which are displayed below: 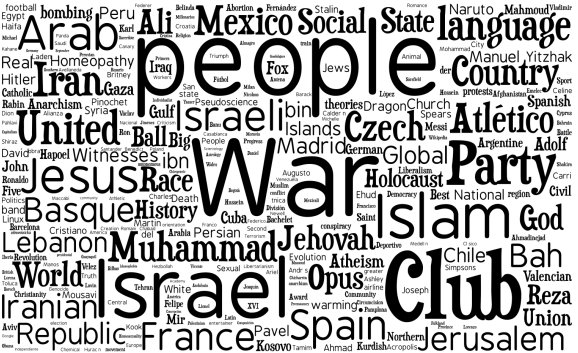 A word cloud of the titles of the 1000 of the most controversial articles. 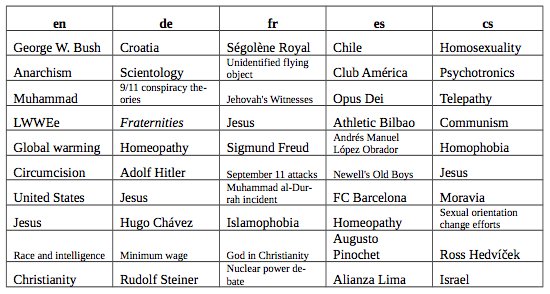 The most controversial articles in English, German, French, Spanish, and Czech.

The study also features this beautiful interactive infographic, which lets you see which general topics are most controversial in different languages:

In a blog post Monday, one of the study's authors, Taha Yasseri, wrote that "these results could help Wikipedia and similar projects (which are already many, and growing) to be better designed." Yasseri and his partners also hope that this case study will help other social scientists to "understand more about human societies."

Wikipedia Wormholes You Should Avoid