Dr. Alvin Plantinga has been writing and lecturing on religious belief for over fifty years and has had a tremendous amount of influence on how we think about faith. His influence has been so extensive that Christianity Today recently called him "the greatest philosopher of the last century" and "the most important philosopher of any stripe." Dr. Plantinga taught at Calvin College in Grand Rapids Michigan and spent most of his long career at Notre Dame University. His most important book on religious faith is Warranted Christian Belief in which he argues that a person can be fully justified in believing in God's existence even if that belief is not grounded on evidence as it's typically understood.

This month, Dr. Plantinga has released a new book taking on the claim that religion and science are incompatible. His book, Where the Conflict Really Lies, is sure to generate a lot of discussion and be the subject of much debate. I was fortunate to spend some time with him recently and talked about his book and how he thinks about this supposed conflict. 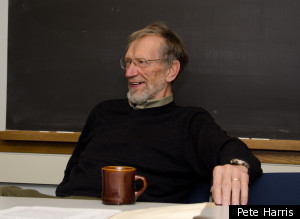 You've been teaching and writing philosophy for 50 years or so now?

Are you interested at all in responding to the "New Atheist" movement in this book? A lot of professional philosophers don't think there is much of interest in the popular work of Dawkins, and Dennett and Hitchens. They don't see much of what is coming from these authors as philosophy per se but more of a popular treatment of these subjects. Is your book a direct response to some of what is going on in some of their work?

Plantinga: It's not directly responding to them. I was working on the book before these guys burst upon the scene (though I'm not sure "burst" is the right word -- at least before they kind of showed up). And of course there's a chapter devoted to Dawkins and a chapter devoted to Dennett so I'm responding to them. But I'm not responding to Dawkins' recent book (or one of his more recent books) The God Delusion, I don't respond to that in the book. I respond to an earlier book of his which I think is much more respectable than The God Delusion.

Of the books that have been written by Hitchens, Harris, Dawkins and Dennett, which of the four of the primary books they've written is the best of the bunch (by "best" I mean the one that makes the best arguments).

How do the arguments in Conflict compliment or extend the arguments you make in Warranted Christian Belief? Do you see it as complementary or more tangential?

Plantinga: Well it's related but it's basically tangential. In Warranted Christian Belief I argue that there can be defeaters for Christian belief even if Christian belief is properly basic and even if what I say about it in the book is all correct. One type of defeater might be something like this: science is wonderful, science is a great contribution, a great discovery, a great modern project but it's incompatible with religious belief or some parts of religious belief. That could count against religious belief. That could be a kind of defeater. You can think of Conflict as addressed to that question. It would be connected in that fashion.

The thesis of this new book is that the conflict really is between naturalism and science, not between theism and science. Is that right?

Are you mainly trying to show that there's no logical conflict even though there might be a methodological conflict? For example, I could see someone like Dawkins saying, "If Christians had just kept their mouths shut and not tried to bring their religious beliefs into the schools or their science, I would have no problem with it." So it's more about how religious belief influences how science is done, or what is being taught in the public schools, influences how Aids is being treated in countries like Africa. So the question is whether this book focuses on the logical problem only.

Plantinga: Well, I don't think there are any methodological conflicts either. As for those social conflicts, those aren't conflicts--in my opinion--between science and religion. They're conflicts between Christians and atheists or Christians and secularists: Christians want to do things one way, secularists want to do things another way. But that's not a science/religion conflict at all. You might as well say it's a science/secularism conflict. In each case, each group wants to do science and then use it in a certain way.

So when these atheists write on these topics as a single problem, you would disagree with that.

Plantinga: Right, we should deal with them one at a time.

In chapter 7 you spend a lot of time on the "fine tuning argument." You start the chapter using the term "fine tuning." The very term seems to imply that there is a "tuner", an agent behind the scenes. Do you think that sets up the problem in a way that assumes the conclusion you want to reach? Why do you use that term?

Plantinga: I use the term because that's the term everybody else uses. That's what this [argument] is normally called. And it's not just as such supposed to imply a designer or a tuner or anything like that. It's just that the value of various parameters have to fall within a narrow range in order for the universe to be "life friendly" you might say.

Is there a difference between fine tuning in the sense you're talking about here and the kind of organization you might find on a beach where rocks are organized in a particular way. We wouldn't want to call that arrangement "fine tuned" even though that particular arrangement of the rocks is very improbable. What is the difference between the improbable arrangement of the rocks on a beach and the improbability of the universe being just the way it is?

So in the case of the universe, the two explanatory options are theism and chance?

Plantinga: Yes, and the latter would hardly be an explanation.

Do you have any writing projects in the works?

Plantinga: Well I'm just finishing this book that you're talking about. Then I'm going to write a shorter, easier, more user-friendly version of Warranted Christian Belief.

One final question and this is a hard one. If you could recommend three books to someone that's exploring these questions, maybe they're on the fence and don't know where to look. Is it possible for you to even list top three books that would be a good introduction to the subject?

Plantinga: I would say the Bible would be one of them. And then I would say Richard Swinburne's book The Existence of God. I think that book would be very good to read in this connection. That's kind of looking at it from the evidentialist's side. From the other side, Nick Wolterstorff's and my book Faith and Rationality.

Read more of this interview on philosophynews.com.