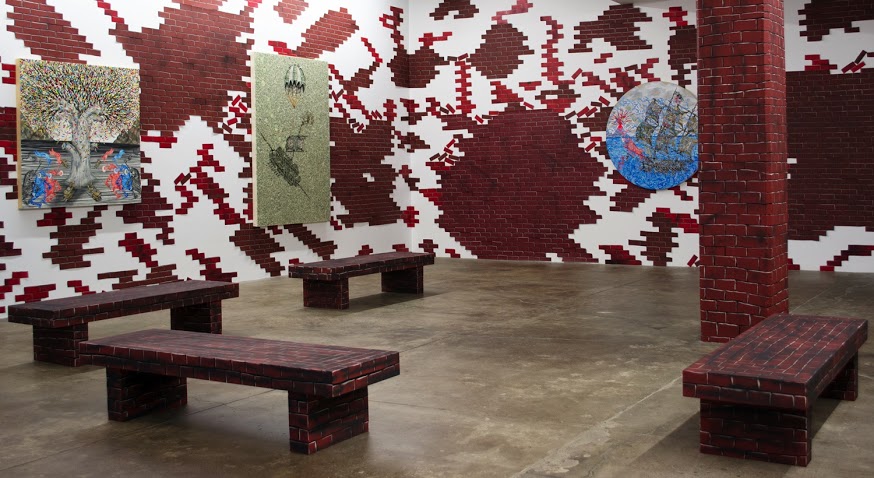 Artist Andrew Schoultz' art projects are currently on view in California, New York and Virginia. At the Monterey Museum of Art, Schoultz' solo exhibition "In Process" includes sculpture, large multi-story wall paintings and a mural on the outside façade. At Morgan Lehman Gallery in New York, Schoultz created an installation of paintings against "brick" wall papering that creates a unique way to experience paintings. And at the RVA Street Festival in Richmond, Schoultz has a gigantic public mural at a former public transportation bus depot. 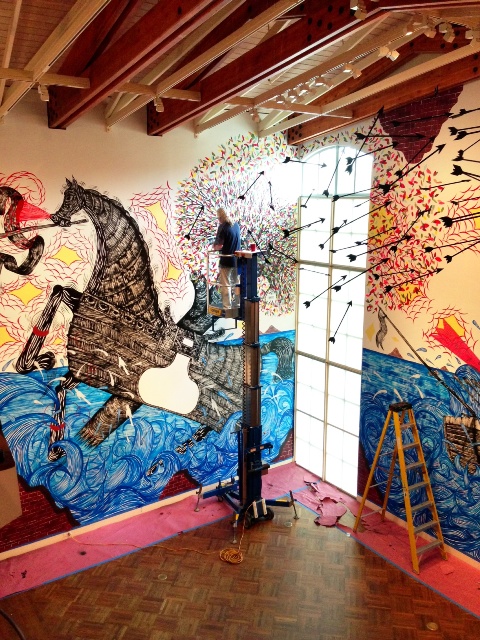 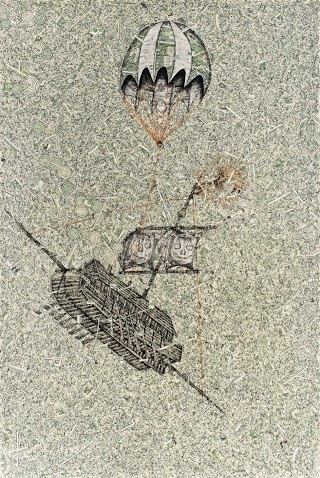 This mix of East/West/New/Old caught my attention. Right after opening his solo exhibition at Morgan Lehman Gallery, Schoultz traveled to Richmond, Virginia, where he answered my interview questions while painting a large mural on the side of an abandoned GRTC warehouse.

All images courtesy of the artist and Morgan Lehman Gallery unless otherwise noted.

What was it like to work on a public art project in Richmond? Were you "inspired" by the monumental statues of Confederate generals (and Arthur Ashe) on Monument Ave?

Yeah, Monument Ave is right up my alley!

The RVA Street Festival in Richmond was a great experience. I painted a 35' by 100' mural in about four days. The festival brought many artists to town to do murals; there were basically about fifty artists there to paint walls. Some local, some not. Almost 10,000 people attended in two days, which is an extraordinary turn-out in my mind for such an event. It was a gigantic compound of warehouse spaces with big walls that had been sitting abandoned for years. A perfect place and location to hold such an event. I had many engaging, informed and intelligent conversations throughout the week about my work, the work of others, and what this type of festival meant for the community at large, there in Richmond. 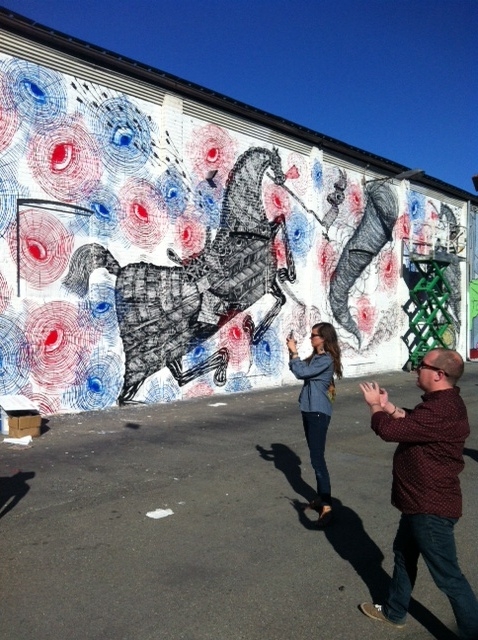 One of the first things that drew me in about your work is the influence of Persian Miniatures, which I studied to interview Ali Banisadr and now I love them. It's not overt but it's there. And it's mixed in with 15th century German map-making. How did this happen?

Around 2004 I became interested in the Nuremberg Chronicle of 1492, which is a large book that basically compiled a lot of the first attempts at mapping Western Europe. I was interested in Persian Miniatures from roughly or slightly after the same time period. Aesthetically I was attracted to the drawing technique where perspective and scale seem to be thrown out the window, and at the same time, there is an insane attention to detail. I am very attracted to this obsessive-compulsive level of attention to detail. On a more conceptual level, I'm interested in addressing 'war' in my work and, more importantly, war's place in history. I am also interested in the cyclical nature of history and how war is a major part of this. 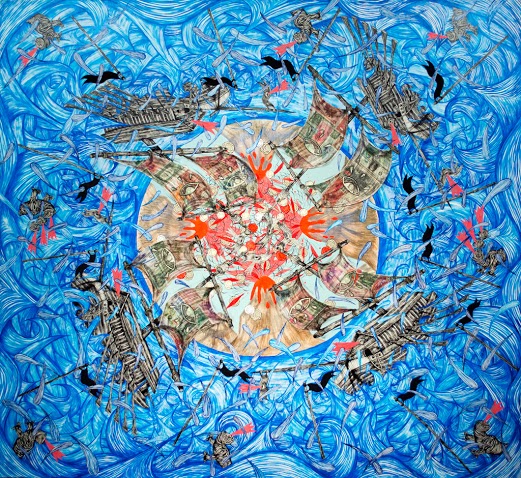 How do the old German maps relate to this?

The first German maps were tools in attempts to strategize and conquer new frontiers and cities. Basically they were tools of war. In the Persian Miniatures I was studying, the story being recorded was the history of the on-going war between the Hindus and the Muslims. It became evident to me that these wars are the same ones still going on today in one way or another. 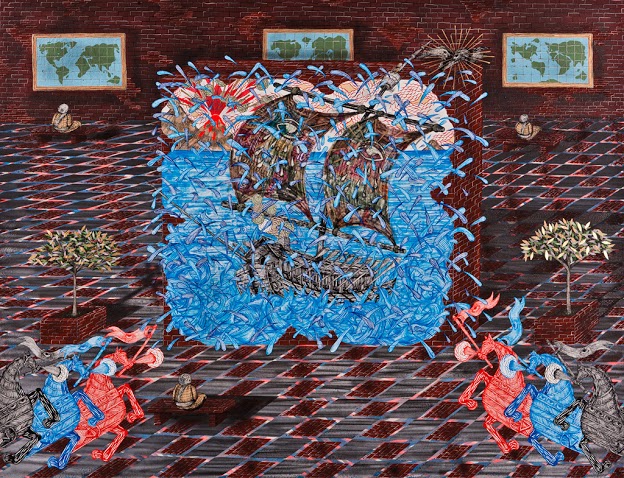 Your installation at Morgan Lehman is striking because of the "bricks" you have plastered all over the typical gallery white walls. We are offered the experience of what it might be like to "walk into or through" your paintings. When did bricks start appearing in your work?

I've been using bricks since around 2004 as well; these also relate to history because they make up the oldest building structures that stand up to the test of time. I like the idea of using these building materials to refer to history. The bricks remaining in ruins show that histories happened and civilizations existed. And because building techniques and the structure itself has stayed pretty much the same throughout history, I look at it as a metaphor for civilizations that are 'built' in a consistent way throughout history. Built and then torn down through war, nature, whatever. Then re-built in the same way, never really benefiting from lessons of past histories. There is an inherent stubbornness to this that I find both funny and ironic. Often for me the bricks are infrastructure falling apart. 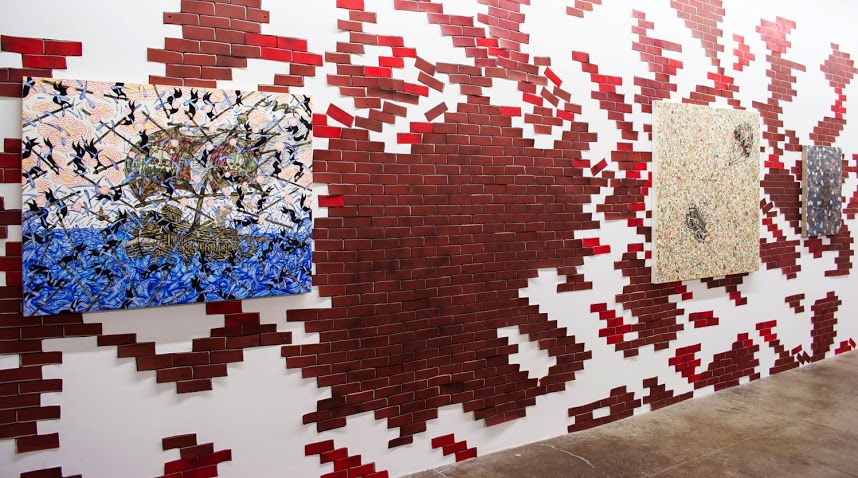 And when I researched the history of Monterey for my current solo show at the Monterey Museum of Art, I learned that first brick building in California was in Monterey. Obviously it was very easy to include this historical tidbit into the show. 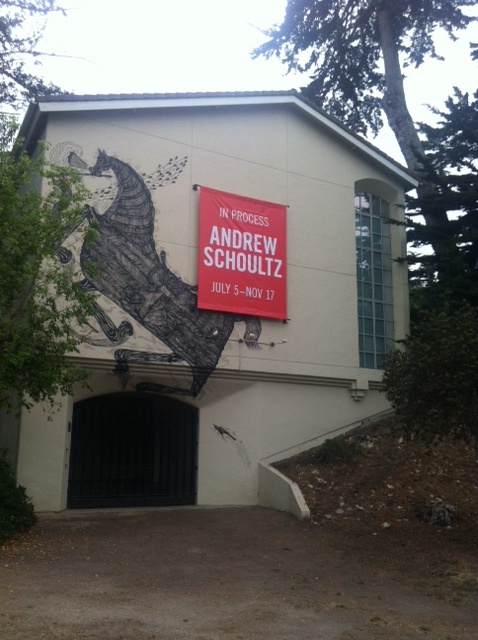 Andrew Schoultz mural on facade of Monterey Museum of Art, 2013

It's not only history that preoccupy your art; how does your background as a former pro skateboarder influence your creative process?

I have been skateboarding hardcore since the fifth grade, was sponsored for several years when I was younger, and it is definitely ingrained in my psyche. I think the main thing about it that has influenced my work as an artist is the unconventional way you look at everything when you are a skateboarder. You are looking at everything as a potential skate spot. A bench is not just for sitting, it is also a super-fun object to skateboard on. I also think the way in which you might experience a city is drastically different when you are a skateboarder. You are going to places you would never go unless you were using them as skate spots. Essentially you are using things in ways they were never intended. This mentality has filtered into my approach for making art and doing public projects. Also, there is a lot of repetition of the same tricks when skateboarding and I like to do my tricks every single time. This obsessive-compulsive tendency is definitely present in my approach for making art as well.

The benches you covered with "bricks" at Morgan Lehman look like ones kids would skateboard over in a park! Can we discuss the impermanent nature of public art and your take on it? To me, favoring impermanence is a fairly non-Western approach to experience which has all been about monumentalizing and memorializing man's achievements. And of course I'm being fairly literal about the use of "man" in that sentence.

Haha. No doubt!! For me, my attitude with this stems from being a graffiti writer for many years. I used to risk my neck to climb up roofs and paint them in the middle of the night in hopes that I would get even a week's run out of it, so I guess I never really had any hang-ups about the ephemeral nature of putting something out there in the public space. When you put something out there, it is not really yours any more, and you will simply drive yourself mad worrying about it. 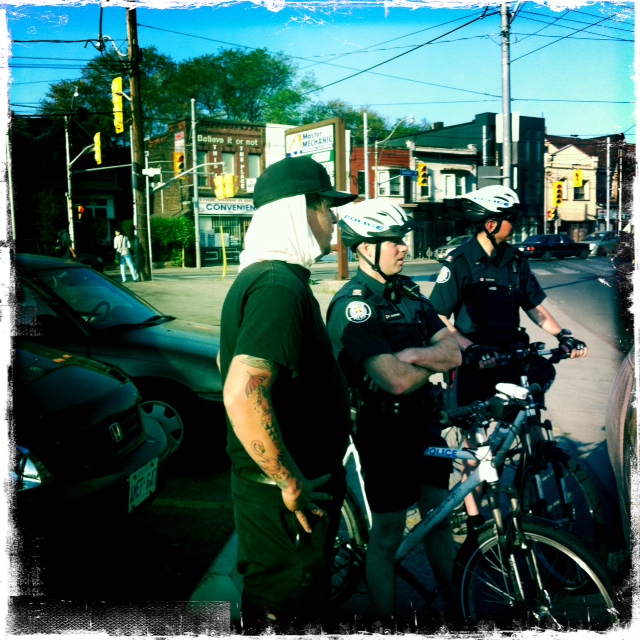