My friend Alissa Bennett is a writer and a director at Team Gallery here in New York. I've known Alissa for about seven or eight years and she has always been a death hag. It's good feeling to be the first to scoop Alissa that someone has died.

She recently dropped issue one of her zine Death Is Better. I think it's fantastic.

The essays in Dead Is Better are ostensibly open letters to the deceased as Bennett opens up to them about why their deaths are interesting to her. In turn these deaths become interesting to us. We discuss it below. 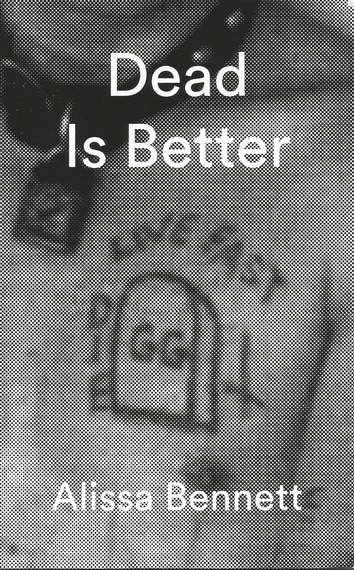 MN: How did this project come about?

AB: I started a top ten celebrity death obsession countdown on Instagram in a casual kind of way a few months ago and was very surprised at how intensely people responded to the posts. I was at a party one night and Frank Haines, who runs a small imprint called Heinz Feller Nilehilisist, introduced himself and asked if I wanted to do a zine with him for his booth at the LA Art Book Fair. I said yes and got to work later that night.

MN: Did you always have an interest in celebrity deaths?

AB: Yeah- I think part of what makes people like this zine is the sincerity with which I have written all 20 entries. The earliest celebrity death that I can remember obsessing over was the murder of Rebecca Shaeffer, an actress who was on a show in the late 80s called My Sister Sam. I was maybe 7 or so when she was shot in the doorway of her apartment by a man named Robert Bardo, and I remember feeling like I needed to know everything there was to know about her. Heather O'Rourke from Poltergeist was another one that I was really haunted by as a little kid- I remember reading about her in my Nana's Star Magazines and feeling generally fixated.

MN: How do you choose which celebrity deaths to write about?

AB: This is a question that has come up a lot, and I'm not entirely sure how to explain why certain deaths fascinate me. I think there is often a general theme of self-destruction via drug abuse, but it's not a conscious policy. I think I am drawn towards narratives that feel unresolved. When a crime or a death interests me, I go after it full force. One of my favorite tactics is to Google terms like "I went to school with (insert dead celebrity's name)...." When a death interests me, I want to know whoever it is from the inside out.

MN: Can you tell the readers about some of your favorite essays in Dead Is Better? We've discussed your interest in Layne Staley over the years and you seem to be only recently coming around to his music. I find this funny. Tell us more.

AB: It's interesting because I found that the deaths I know the most about are typically the ones that I wrote the least about. Layne's death is a long-time obsession for me, and I feel pretty confident in saying that I probably know almost everything that can be known about it by a member of the general population, but his entry is one of the shorter ones and is more oriented around a personal response to the information I have gathered rather than the information itself. I think my favorite entry is the one that's about Paula Yates, Michael Hutchence and Peaches Geldof. It is just such a crazy trilogy of death! There are a couple of entries that include this bizarre phenomenon where children die in exactly the same way as their parents, and Peaches and Paula are definitely one of these. I also liked writing about Richey Edwards from The Manic Street Preachers a lot- he is someone who I have gone back to over and over through the years, but I still feel like there are major gaps in my knowledge. It's exciting to feel like there is more to know about someone, and he is definitely one of those people. 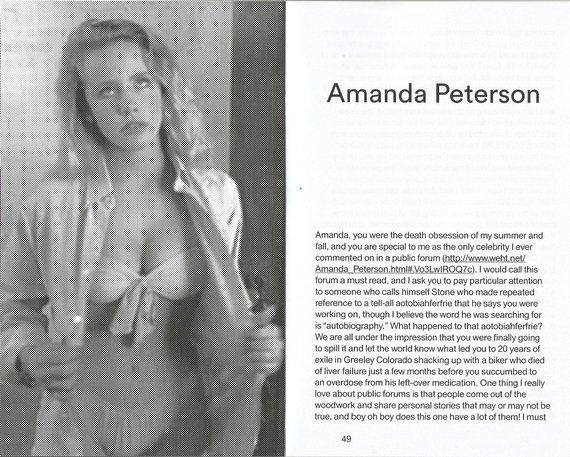 MN: How come some celebrity deaths do not interest you?

AB: You know, a lot of people were asking me about certain deaths that they thought I should profile and most of the time, they were just not people or cases that I found particularly interesting. I have to feel something personally for each subject, which is maybe why ultimately the entries feel like they are from my heart and not just a glib series of facts. It's the same thing as liking a certain movie star or kind of ice cream- it's really about personal preference and choice. I'm not necessarily interested in "death" in a wholesale way; I'm interested in people and mystery and heartache.

MN: How many issues do you anticipate?

AB: I am going to do two more issues in the series. The next one will be profiles of my favorite crimes, and the third will be my favorite drug documentaries and episodes of Intervention.

MN: I recall you originally intended to use outside writers. I convinced you not to as I think it would deter from the original vision. Do you think I was right?

AB: I do think you were right- I think part of what makes the zine work is that it is not just a litany of tragedy- it is a catalogue of the feelings that I have about these people who were strangers but who I somehow feel I kind of know.

MN: What has been the reception for Dead Is Better so far? Has it been a surprise?

AB: It has been a huge surprise! I wrote it relatively quickly and the first edition is full of copy errors simply because I didn't really foresee it becoming a thing. When the first run sold out so quickly, the first thing I did was go through and fix the most glaring mistakes. It has been kind of shocking to hear people's reactions, which generally are kind of heartfelt. The feelings that I have about the deaths that I've chosen to write about are not just MY feelings, they are the feelings of millions of other people- the celebrities we love are always reflections of ourselves, and I think that people respond to the way that I have chosen to transmit my own fandom.

MN: Are there any plans for a book or is it too early to mention?

AB: There will be a book! After all three issues are completed; I will go back through and expand each entry into something more complete.

MN: When can we expect the next issue?

AB: Legalize Crime will be ready for the New York Book Fair in September.

MN: Where can people find the zine?

AB: Printed Matter and Karma in New York both carry it and it can be bought online from Heinz Feller Nilehisist's Big Cartel store.

MN: Was I the first to tell you about Whitney Houston?

AB: You were! It's finny because now it is really a race for the people I know to be the first to tell me about a new celebrity death. You were the first one to start texting me right away as soon as you heard something.