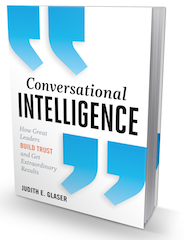 Twenty-eight years ago I began my first experiment in what I call conversational intelligence. I was hired by Union Carbide to work with 17 high-powered sales executives in danger of losing a bid for a key contract. My job was to figure out how they could raise their game and beat the other seven competitors.

For more than two weeks I had them role-play potential conversations with "customers" and I charted what they said. The patterns were clear: The executives used "telling statements" 85 percent of the time, leaving a paltry 15 percent for questions. What's more, almost all the questions they asked were actually statements in disguise. They were talking and talking, trying to bring their counterparts around to their point of view, all the time thinking that they were still conducting good, productive conversations.

Having spent thousands of hours observing executives in similar, real-world situations -- from prospecting to performance reviews, business development to innovation -- I can tell you this is a common problem. People often think they're talking to each other when they're really talking past each other. They carry on monologues, not dialogues.

There is a biological explanation for this: When we express ourselves, our bodies release a higher level of reward hormones, and we feel great. The more we talk, the better we feel. Our bodies start to crave that high, and we become blind to the conversational dynamics. While we're being rewarded, the people we're talking to might consciously or subconsciously feel cut off, invisible, unimportant, minimized and rejected, which releases the same neurochemicals as physical pain.

Feeling that rejection sends them into a "fight, flight" response, releasing cortisol, which floods the system and shuts down the prefrontal cortex, or executive brain, letting the amygdala, or lower brain, take over. To compound conversational challenges, the brain disconnects about every 12-18 seconds to evaluate and process, which means we're often paying as much attention to our own thoughts as we are to other people's words.

These are natural impulses. But we have to learn to master them because clear two-way, empathetic, non-judgmental communication is critical for the high functioning of any business. It's how deals get done, projects get run, and profits get earned. That's why I now spend my time teaching people -- just like those executives at Union Carbide -- how to become more intelligent about conversations.

Recognize your blind spots:
Stop
• Assuming that others see what you see, feel what you feel, and think what you think, since that's rarely the case

• Failing to recognize that emotions, such as fear and distrust, change how you and others interpret and talk about reality

• Sharing that space by asking open-ended discovery questions, to which you don't know the answers, so you stay curious (i.e., What influenced your thinking?)

• Listening non-judgmentally to the answers

Through coaching, the Union Carbide sales team began to notice when they were making assumptions, interpreting incorrectly, and jumping to conclusions. They started asking discovery questions and paying close attention to their customers' answers, which expanded their frame of reference and gave them new insights into needs and opportunities. In so doing, the executives presented themselves as conversationally intelligent partners, not sales people. They won the contract.

Judith E. Glaser is CEO of Benchmark Communications, Inc. and Chairman of The Creating WE Institute. She is an Organizational Anthropologist, and consults to Fortune 500 Companies. Judith is the author of 4 best selling business books, including her newest, Conversational Intelligence: How Great Leaders Build Trust and Get Extraordinary Results (Bibliomotion, 2013) Visit www.conversationalingelligence.com; www.creatingwe.com; jeglaser@creatingwe.com or call 212-307-4386