"When we're reading applications, the essay is usually the piece of the application that we get most excited about." 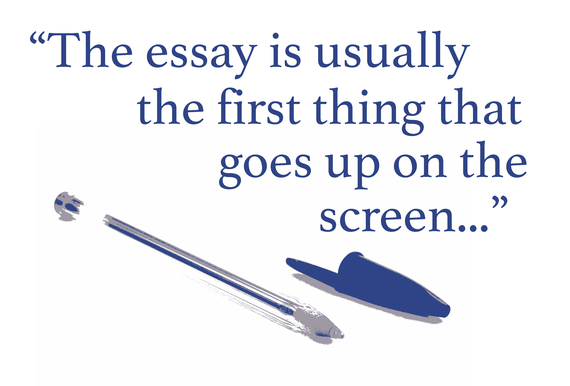 We hit the road to speak with admissions counselors at colleges and universities around the country, gaining a deeper understanding of the role the admissions essay in undergraduate admissions. David J. Dent, founder of Write for the Future, interviewed Jennifer Gandy, a senior admissions officer at Harvard, for our first Conversations on Admitting column-- the kick off in a series to help de-mystify a process that compels schools to choose between thousands of applicants, who, in the case of Harvard, may have perfect or nearly perfect GPAs and SAT scores. "Yes, while looking at their perfect SAT scores and looking at their straight A records and reading the list of items on their resumes - those can be impressive, " Gandy said. "But the essay is really the one piece, along with what teachers say about a student, that can be the most compelling and most exciting. Those are the things that we usually end up sharing with the admission committee when we're discussing, and making cases to accept applicants. The essay is usually the first thing that goes up on the screen, we say 'Look at this kid, look at this thing he or she wrote.' So I would hope as students are going through this process, the essay would also be what most excites them."

David: Does the essay present an intellectual opportunity a student rarely gets --the chance to look at himself or herself within the world? Rather than dreading it, shouldn't it be seen as an opportunity?

Jennifer: I would love for students to enter into the process with that type of mindset. I think they would probably enjoy the process a lot more. I think a lot of students feel like it's stressful, it's scary, it's this hoop that you need to jump through, and when you have that mindset when you're writing it's hard to be yourself.

D: What advice do you have for students writing essays?

J: ...To speak in your own voice....We are looking for the essay to shed some light on the personal qualities of the applicant and what their personality actually is, and how the person comes through in the writing is really important. Most of the essays that we read are well written, they're usually students that are very academically strong, they're usually very good writers, but a lot of times the essays come through a little bit flat because I think students tend to try to be overly formal in a college essay. Or they write an essay and then it gets passed through the English teacher and the parents and the aunt and uncle and the guidance counselor and by the time it gets to us, it's just so sterilized that it's hard to really get a sense of that person.

D: In terms of developing a unique idea, is that sometimes where you see the essays falling short?

D: So you would tell students to develop original ideas and to develop a portrait of their personalities on paper? Is that where they can stand out?

J: I think so. I don't know that it's developing their personality so much as being able to write it on paper.

D: Many students are programmed to write in distant third person, what kind of challenge do you think that imposes on a student and what do you say to students who are facing that challenge?

J: That's a great question, I honestly have not thought too much about the differences of what a student writes everyday for school versus what they need to write for their essay. I think it's a new kind of challenge, but hopefully one that students are already going through in terms of the thought process when they're approaching the college application process, because I think the entire process itself is so personal where students are really forced to think about their future. They're forced to prioritize what they're hoping to gain from the college experience; they're forced to narrow down their interests. So there's so much of the process that's very personal to students that hopefully that transfers to the essay writing process as well. But I realize that it is a very different type of writing for the students, and I don't know if they're getting that kind of practice.

D: What do you think of the writing instruction at the high school level, using the admissions essays to judge?

J: ...One of the side effects of reading essays at a place like Harvard is we really don't read horribly written essays. I do here and there, but I'd say across the board our applications tend to be extremely strong. I don't know if that's because these are the most talented students in the country that are applying and so they're talented across the board and they tend to be good writers as well, or whether that's an indication of the instruction they're getting from their schools. I guess I would say even more than the writing mechanics and the way the essay gets crafted, the thing that tends to be weaker is the content and the idea development. Those tend to be a little bit more formulaic or a little bit less interesting, and so I think that's where the students usually stand out in this process because their ideas are really well developed and the content is well done.

D: So Harvard has a certain amount of self-selection - many of them meet a certain level of excellence as it relates to the numbers. What does that do to the role of the essay in the selection process?

J: Well certainly the essay can help a student stand out along with the other content pieces of their applications. It's never really the numbers that make you stand out in the process. Usually if they can really show their personality, or show a depth of thought, or show something truly excellent in the essay, or in what they've done outside of the classroom, or within the classroom, those things can help stand out. So we say that we're looking for what we call a distinguishing excellence going through this process, and that can really be in a lot of different places. I think the essay can definitely be a part of that.

D: Another admissions officers that I interviewed said of students writing the essay, "they should find an idea that is interesting to them first and foremost, and avoid the mindset of thinking about pleasing an admissions officer."

J: Yeah, I think that tends to make for a more genuine essay and a more compelling essay when the student actually cares about what they're writing about. But I think it's also important for the student to look at the essay as one piece of the larger application process, realizing that the goal of this process is for them to be able to provide, as much as possible, a holistic picture of who that person is. So I actually like to tell students to - as they're going through the application process - not start at the beginning of the application and fill in the boxes starting at the beginning and then when you get to the end and go, 'oh I've done all of the requirements so I'm done.' I think that it's important for students to think through 'what are the main aspects of myself that I'm hoping to convey in this process?' and even writing down 'these are the five or six things about me that I think are the most important or I think are the most telling or I think will really help me stand out, and then sort of plan within the application where am I going to show each of these things about myself, and certainly the essay would be one where you get to go a lot deeper. But I think what students end up doing a lot of times is repeating the same information in various parts of the application, and there are gaps of things that are missing that we don't get to learn about them. So I think that is an important piece as well. That being said, I hope that the students would choose to write about something they really care about and can really delve into.

D: Do you think the essay can help promote the prominence of writing, and do you think it has risen or will ever rise to the relevance of the SAT?

J: I think it's certainly relevant. The only thing that probably diminishes the relevance of the admissions essay is the fact that so many people could have had input into the process, so we really have no way of knowing how much of the essay is the work of the student versus other people who have helped them in the process. I think that's the main discrepancy in relevance, whereas the SAT we know the individual sat down and took that test, so we know it's the student.

D: How did you get into the world of admissions?

J: I came to Harvard as an undergraduate, class of 2001. And after college, I started teaching high school for several years. I taught overseas in China. I really just enjoyed the age group of high school students and during my time as a teacher found myself doing a lot of advising my students who were applying to college. I realized that I was very interested in that transitional period of students going from high school to college and the decision making process they were going through and a lot of the personal reflection that you went through during that process. So for me, coming back to Harvard and working in admissions was just a really exciting step to sort of help students transition through that process and be a part of it.