Many were stunned when Wall Street Journal (WSJ) Editor-in-Chief Gerard Baker said his newspaper would not refer to false statements from the Trump administration as "lies," because doing so would ascribe a "moral intent" to the statements. Baker appeared on NBC's "Meet the Press" (January 1, 2017) where he described some of President-elect Donald Trump's falsehoods as "questionable" and "challengeable." He went on to say "reporters should state the facts, but leave classifying them to readers, citing the example of Trump's claim that thousands of Muslims in New Jersey were celebrating on 9/11" (which is false). "I think it's then up to the reader to make up their own mind to say, 'This is what Donald Trump says. This is what a reliable, trustworthy news organization reports. And you know what? I don't think that's true."

Now Trump Senior Advisor and master obfuscator, Kellyanne Conway, has given Baker a term to use for Trump's lies. The WSJ can now refer to Trump lies as "alternative facts". 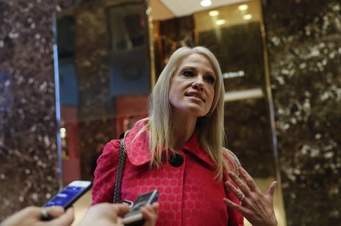 Today on "Meet the Press," Todd questioned Conway about "why the White House new Press Secretary, Sean Spicer, in his first press briefing doubled down on Trump's earlier claim that the audience for the Trump inauguration "was the largest audience to ever witness an inauguration, period." After ducking and weaving in a manner that would have done Mohammed Ali proud, Conway finally responded to Todd, "You're saying it's a falsehood. Sean Spicer, our press secretary gave alternative facts."

After seeing the video of Conway talking about alternative facts Washington Post reporter Aaron Blake wrote "If there is one video clip that describes the new reality for the political media -- and for the truth -- during the President Trump era, it is this one." Americans and the rest of the world will have to learn to deal with this if we are to truly understand and work to stop the negative things we anticipate from the Trump Administration.

Saturday's Women's March on Washington and the sister marches around the United States and the world are a beginning. But marching is only step one. Everyone must take the energy created by these marches home to their communities and put it to work. We need to act beginning today. Call your congressman and let them know your thoughts on Trump's cabinet nominees. Make a daily call to your legislators national, state and local, and tell them what you want them to do; they work for you. Support candidates or run yourself for everything from school board, to city council, to state legislature, to Congress. Your voice can and must be heard.

I am a Democrat and my activism will be with the Democratic Party. If we join together we will be successful and rebuild the Democratic Party at the national level and in each state. We will build a cadre of volunteers in each precinct and District and make sure we communicate with the people living there every day, not just around elections.

The Democratic Party is a big tent and we don't need to tear it down to succeed; we need to make it stronger. Let's not forget 66 million people voted for our Party. Our goal must be to expand on the policies those voters supported and ensure everyone understands our aim is both equality and economic opportunity for all.

We need to effectively communicate with each and every person and listen to them. If a policy needs tweaking, or if we need to look at something new, we need to be willing to do that. The ideas will come from the ground up not the top down. Our goal should be by the 2018 mid-term elections we will have added ten million more people to those already voting with us. Trump may help if he tries to eliminate health insurance for millions or privatizes programs like Medicare and social security. But we can't count on that. We have to talk about our own programs and share them with people in language they understand explaining how they impact them and their families in a positive way. We can do that.

For leadership of the Democratic National Committee (DNC) I support Tom Perez, former Secretary of Labor, for Chair, and Adam Parkhomenko for Vice-chair. I do so because they have the skills and experience which will best help us do what we need; that isn't building a massive new national structure but rather building a strong Democratic Party in every state and territory. They understand the technology we need and how to share it with each state and local district. They understand how to recruit and motivate the army of volunteers we will need around the country to take our government back.

Donald Trump lied to the American people during the campaign. He promised one thing and today we see he is already not delivering. He promised to 'drain the swamp' and instead is naming millionaires and billionaires and a host of people who have spent their lives in D.C. to his administration. What he has done is tell us from now on we should refer to his lies as 'alternative facts'. Well he fed voters a whole host of 'alternative facts' and we Democrats have our work cut out to make people see the truth.

We will rebuild our Party so once again we have the trust of the majority of Americans whether they are Black, White, Asian, Latino, LGBT, male or female, young or old. The march was yesterday; today is the first day of our future. Together we will win the future.