So did I, until a few days ago. But then a few of our colleagues approached me with an unusual question: What happens if you try to bake cookies using the dough in cookie dough ice cream? Can it be done?

After consulting with the HuffPost Taste editors, I confidently told them it could not. That the "cookie dough" ice cream manufacturers use in ice cream couldn't possibly be the same thing that we use to bake chocolate cookies at home; that it must, surely, be an amalgam of sugar, gums and flavoring chemicals that would turn into some sort of crystalline powder or watery slime in an oven.

But underneath this thin veneer of confidence, I felt unsure. Was it possible? Does cookie dough ice cream contain real cookie dough? Or if not, might the process at least yield something hilariously disgusting? I was intrigued enough to give it a try.

I bought every brand of cookie dough ice cream at my local convenience store for the experiment: Edy's, Edy's Maxx, Turkey Hill and Ben & Jerry's. I figured it would be impossible to extract the dough from the ice cream while it was frozen solid, so I put the ice cream in my refrigerator to melt. (That's a better bet for food safety reasons than leaving it out on the counter.) After about 36 hours, most of the ice creams in pint containers had liquified, but the ice cream that was in a half-gallon carton was still half-frozen, so I zapped it in the microwave for about two minutes. I also microwaved one of the two pints of Ben & Jerry's I had on hand, to see if it would affect the process.

I poured the melted ice cream through a fine-mesh strainer into a bowl:

Every time, a fair bit of partially melted ice cream clung to the cookie dough. I extracted the cookie dough by stirring the mushy beige mass around in the strainer with a spoon. The cream fell away from the dough like mud trickling away from gold in a 49er's pan. See?

I put the melted, doughless ice cream aside and plopped the wet little mounds of cookie dough down on a Silpat (a non-stick baking surface) on a cookie sheet...

Then I baked the cookies at 375 degrees Fahrenheit for about 15 minutes -- more or less what I would have done if I'd been baking cookies from normal pre-mixed cookie dough. I expected the worst when I opened the oven door. But instead, I was greeted with totally yummy-looking (and -smelling) cookies. For once, I was thrilled to be proven wrong.

This batch included, from left to right, Edy's Maxx, Turkey Hill and the Edy's I'd microwaved:

As you can see, melting the ice cream in a microwave also melted the chocolate chips inside, so the dough from those cartons of ice cream tended to be crisper and more chocolatey than the cookies made from ice cream that had melted more slowly.

So, how were they? Not bad at all. They weren't the best cookies I'd ever tasted -- they were a little dry and sweet -- but they were 100 percent recognizable as homemade chocolate chip cookies. If a friend had baked them for me, I might have thought they weren't a very talented baker, but I wouldn't have suspected they were crazy or evil. Here's a look at the inside of the cookie made from the Edy's Maxx cookie dough ice cream:

I was, however, curious to know why the cookies were so flat and crisp. So I asked the PR people from Ben & Jerry's and Edy's how the cookie dough they used in their ice cream was different from "normal" cookie dough.

Ben & Jerry's spokesperson Elizabeth Stewart says her company makes three main tweaks. There's no baking powder or soda for leavening, which explains the flatness and dryness. The eggs inside are pasteurized. And the flour is subjected to a process called "enzyme deactivation," wherein, she explains, "it receives a heat treatment to make it safe for consumption; it’s very similar to pasteurization." These heat-based sterilization techniques may account for some of the caramelized notes I detected in the cookies.

Diane McIntyre of Edy's owner Nestle said that the Toll House-branded cookie dough in Edy's undergoes a similar process. Their little morsels of cookie dough also include chemicals that prevent them from sticking to the ice cream machinery and from disintegrating into the ice cream; she couldn't say whether or not these additives would likely affect the taste or texture of the cookies I baked.

All in all, though, I would like to emphasize that the cookies were pretty good. There was just one big problem. I had a ton of leftover melted ice cream. I didn't want to waste it, but I also wasn't willing to drink it as some kind of dessert soup. So I decided to try turning it back into ice cream -- in an ice cream maker. I wasn't completely sure that it would set after it had melted, but I was emboldened by the success of the cookies, so I poured it in...

And let it churn for a solid 45 minutes:

What I got was, indeed, ice cream. Some of the flavor of the cookie dough had permeated the rest of the ice cream during the melting process, lending some distinct pastry and chocolate notes to what might otherwise have been a bland sweet cream or vanilla. Call it "creme de cookie dough."

Here's a closeup of the final result: 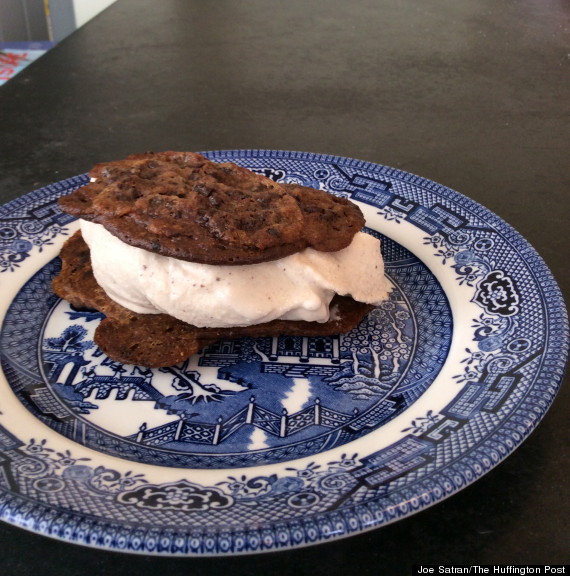 Are there easier ways to make an ice cream sandwich? Yes. But none of them are as satisfyingly DIY as this one.