A German cookie manufacturer has found itself the victim of a crummy theft.

The Associated Press reports that police are on the lookout for a giant golden cookie that was stolen from a sculpture atop the Bahlsen headquarters in Hannover. The 100-year-old, 44-pound biscuit went missing earlier in January, baffling authorities until this week, when a ransom note was mailed to Hannoversche Allgemeine Zeitung newspaper along with a photo of the apparent thief holding the sculpture while dressed in a Cookie Monster costume.

"I have the cookie! And you want it," the letter reads, according to HAZ via Spiegel.

The perpetrator is demanding that Bahlsen donate cookies to a local children's hospital, making the effort to specify that the cookies be "milk chocolate." According to a HuffPost translation of HAZ, if his demands are not met, the gold cookie "will wind up in the trash with Oscar the Grouch."

HAZ confirmed to Der Spiegel that the same letter was also sent to Bahlsen, which is offering a €1,000 ($1,347) reward for any information that leads to the culprit's capture. The thief has further stipulated that the reward money be donated to a local animal shelter.

While the cookie thief remains at large, it appears the real Cookie Monster has offered his services to help find the imposter and thus clear his good name:

And though the motives of the cookie thief may be pure, a spokesperson for the children's hospital is quick to remind the public that this is still a rather serious instance of extortion.

"One cannot forget that what we are dealing with here is a case of theft and blackmail," Björn-Oliver Bönsch told HAZ. "Bahlsen has already done a lot for our hospital -- it doesn't need to be coerced in this way." 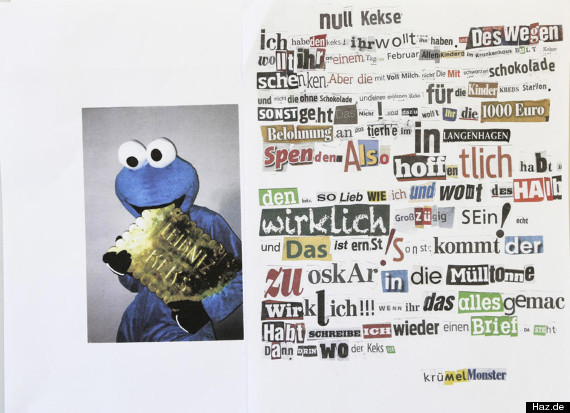