The Los Angeles County Museum of Art and the J. Paul Getty Museum have complementary exhibitions on view through July 31st, Robert Mapplethorpe: The Perfect Medium. Each exhibit highlights a different aspect of the controversial artist's complex body of work. LACMA focuses on Mapplethorpe's relationship to New York City's underground sexual and artistic scene while the Getty explores his fascination with classical forms. 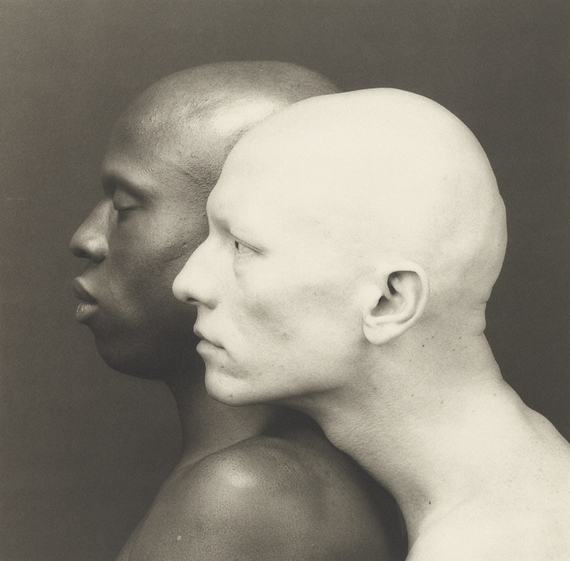 As a product of the 70s and 80s, I'm thrilled to have been asked to develop ArtBites classes around both exhibits even though food isn't exactly a topic featured in Mapplethorpe's work. At least not literally.

In the 70s, gourmet cooking was fashionable America and kitchens were stocked with all sorts of gadgets and appliances even though people favored going out to the new Chinese, Japanese or Italian restaurant. The 80s were all about informality and comfort. Few people were cooking from scratch and the microwave became the household's best friend. Frozen foods and boxed cake mixes were IT.

My food memories are not the norm for the time (my parents were both avid cooks and food lovers), and I grew up nowhere near the grungy underground that was Mapplethorpe's New York City. But I love the music of the period and have long fantasized about being a fly in a wall at the Chelsea Hotel. I became fascinated by what the avant-garde may have been eating in the City's ubiquitous clubs and restaurants. Loads of drugs, Lou Reed, and Andy Warhol's banana were the first thing that came to mind, then I read Patti Smith's fascinating book, Just Kids. The poet and punk goddess, who cohabitated with Mapplethorpe at the Chelsea Hotel before they achieved fame, remembers seeing Jimi Hendrix and Janis Joplin at El Quijote, the hotel's bar/restaurant, with plates of shrimp with green sauce, pitchers of sangria, and bottles of tequila. She also recalls the devil's food cake with shredded coconut served at Max's Kansas City. (Appropriately they chose to put the dark and rich devil over the light and airy angel on the menu). A table in the back room at Max's is where Warhol and his faithful posse held court. This is the table that Mapplethorpe yearned to be a part of.

Warhol, later a frequent subject -- and competitor -- of Mapplethorpe's, led me to his friend Maxime de la Falaise, a socialite and model with a food column in Vogue and several cookbooks under her belt. Her second husband, John McKendry, was curator of prints and photographs at the Metropolitan Museum of Art; their boho-chic dinner parties were the all the rage among the uptown crowd. The well-connected couple helped launch Mapplethorpe's career and McKendry even had an affair with the young photographer. (A haunting photograph of him taken by Mapplethorpe the day before his death is featured in the Getty exhibit.) 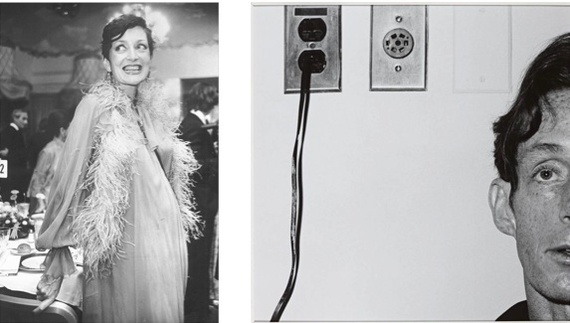 The English born De la Falaise was also a regular at Studio 54 where she was known to show up with tea sandwiches. She designed the menu for Warhol's never materialized "Restaurant for the Lonely Person", the Andy-Mat. The concept was that you would get your food on a tray, then take it into a booth and watch television. Her menu featured items such as onion tarts (no need to worry about bad breath since dining solo), shepherd's pie, Irish lamb stew, and the signature "nursery cocktail" of milk on the rocks. In keeping with the times, the dinners were frozen and required only reheating. 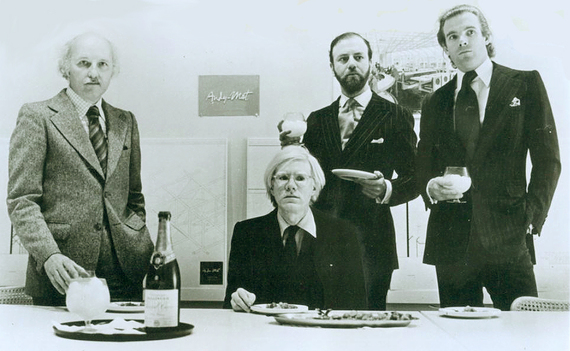 Here's a modern version of the Andy-Mat's onion tart. This one's made from scratch. Eat alone or share with a friend with a glass of champagne, the beverage that flowed freely at Mapplethorpe's last art opening. 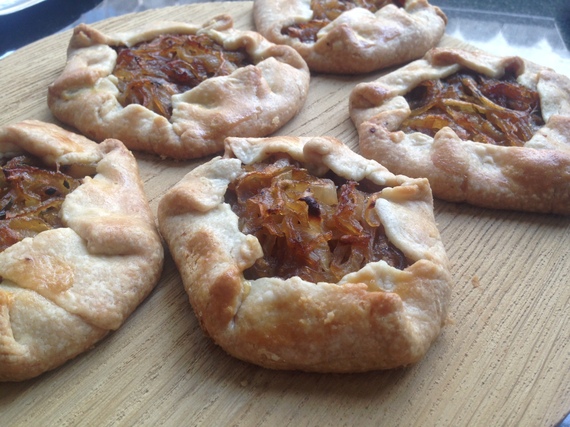 1. Make the pastry. Place the flour and salt in the bowl of a food processor fitted with the steel blade. Pulse for a few seconds to combine. Add the butter and pulse 10 to 12 times, until the butter is in small bits the size of peas. With the motor running, pour the ice water down the feed tube and pulse just until the dough starts to come together. Place onto a floured surface and knead quickly into a ball. Wrap in plastic and refrigerate for 1 hour.
2. Prepare the onions. Pour olive oil into a large skillet set over medium heat. Add the onions and sauté for 15 to 20 minutes, until golden brown and caramelized. Add the fresh thyme and season to taste with salt and pepper. Set aside.
3. Preheat the oven to 400º F. Line a sheet pan with parchment paper.
4. Divide dough into 4 pieces. On a floured counter, roll the first piece dough out into a roughly 8-inch round, although it really doesn't need to be perfectly shaped. Transfer to the prepared baking sheet. Sprinkle about ¼ of the onions into the center of the dough, leaving a 1-inch border. Fold the border over the filling, pleating the edge to make it fit. The center will be open. Brush crust with egg yolk. Repeat with remaining dough and filling.
4. Bake for 30 minutes, until golden brown all over. Remove from the oven and let stand for 5 minutes before serving warm or at room temperature.