I'm a wimp when it comes to horror, yet I've always been drawn to images of Xipe Totec, a pre-Columbian figure portrayed as a priest wearing the flayed skin of a sacrificial victim - a poor guy who, as if having his skin flayed wasn't enough, also had his heart cut out, evidenced by a stitched-up wound in the chest. (He was given plenty of pulque, a type of undistilled tequila, before getting started.) 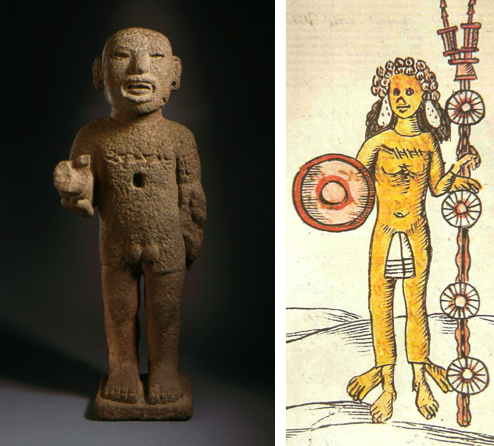 The flayed skin still has the victim's hands and sometimes his feet dangling loosely from it. As macabre as this sounds, warfare was conceptually linked to agricultural fertility and Xipe Totec was the god of renewal and new vegetation. He was associated with the Aztec goddess of maize, Chicomecoatl, and was widely worshipped in central Mexico at the time of the Conquest but was known throughout most of Mesoamerica. Representations of him have been found all to way to the Yucatan Peninsula and along the Gulf Coast. (FYI - though human sacrifices were very real before the Conquest, the scale of them is disputed since both Spaniard and Native sources alike were prone to exaggeration.)

Among the most fascinating of all Pre-Columbian images, Xipe Totec expresses the belief that life cannot exist without death. Wearing the flayed skin was an honorable duty prescribed to priests who emerged from the rotting flesh after twenty days, bursting forth like a germinating seed symbolizing rebirth, the renewal of the seasons, and the growth of new vegetation. Some accounts say that the thigh from the sacrificial victim was cooked in a stew of hominy and salt. Since maize was a sacred plant in the New World and some ancient Mesoamerican cultures believed the gods made humans from masa (corn dough), combining human flesh with maize was of particular ritual significance. The stew was shared as an act of religious communion.

I'm not sure if this art as appetizer has made you hungry but why not add some chile to the pot for a tasty Pozole? Here's a recipe. Don't worry; it's made with chicken. 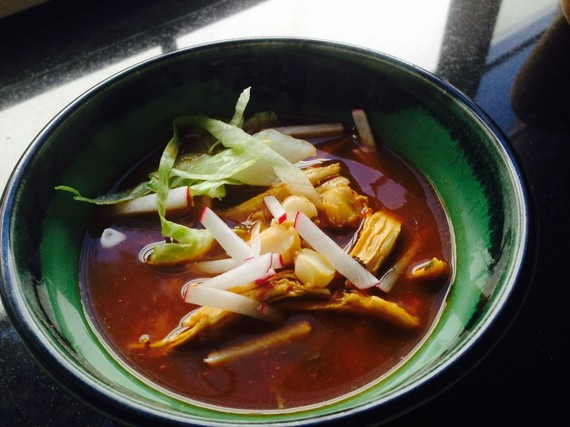 1. Bring the chicken with enough water to cover to a boil in a large pot, skimming froth, then reduce heat to a simmer. Add 2 tablespoons salt, onion, garlic and oregano. Partially cover and simmer over medium-low heat until the meat is tender. Remove the meat from the broth, let cool, shred and set aside.
2. Strain broth and return to the pot. Transfer the cooked onion and garlic to a blender with 1 ½ cups of the broth. Puree until smooth and add to broth.
3. While the meat is cooking, stem and seed the chiles and rehydrate them in enough hot water to cover - keeping them submerged - for about 20 minutes. Puree the chiles with 1 ½ cup water.
4. Add the pureed chiles, shredded meat and hominy to the broth and simmer for about 5 minutes. Taste, adjust seasoning and serve hot with tostadas, shredded lettuce, radishes, oregano and lime wedges.