The Huntington Library, Art Collections, and Botanical Gardens has a fascinating and timely exhibit on display through March 21st, Y.C. Hong: Advocate for Chinese-American Inclusion. Curated by Li Wei Yang, the exhibit provides insight into the early history of the Chinese experience in California and embraces the importance of immigrants in American society. The focus is on Y.C. Hong, an immigration attorney and political activist, who, together with his wife, Mabel, was largely responsible for the creation of Los Angeles's Chinatown. 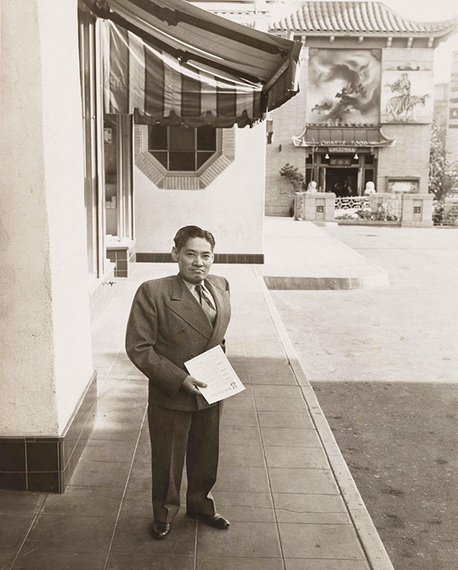 Early images of Chinatown naturally got me thinking about Chinese food and its history...

One of the most ancient cuisines in the world, Chinese food follows the yin and yang principle of finding balance in opposition and the understanding that everything within the cosmos is interconnected. Codified between the 6th and 4th centuries BC, early texts pay attention to food preparation, table manners, and appropriate food offerings for deceased ancestors. (Nurturing the body was as important as the quest for intellectual and spiritual perfection in life and in death.)

Nutrition and cooking were subjects of discussion and reflection by philosophers, writers, and emperors. An interest in food along with knowledge of painting and poetry was one of the essential attributes of a cultivated person. Scholars throughout the centuries sat in gardens and wrote about food in poems, songs, and verses. Culinary skills were an important qualification for government appointees. Yi Yun, a 2nd century BC cook who later became prime minister, likened the world to a kitchen and governing to cooking. Just as it was necessary to understand flavors in recipes, he believed that it was necessary to grasp people's sufferings and aspirations in order to govern them. For millenia, China was the most well fed population in the world.

Unfortunately, this poetic thinking did not last among China's leaders and political changes in subsequent centuries created economic chaos leading to the first wave of immigrants to California in the 1850s. They arrived for the Gold Rush and stayed to build the Transcontinental Railroad. Foods, the connector to home and identity, were brought to America by these early immigrants and evolved into the popular food we know and love today. Dependent on the patronage of the general public in early Chinatown restaurants, Chinese cuisine was modified to American tastes. The Huntington's exhibit begins and ends in Chinatown. 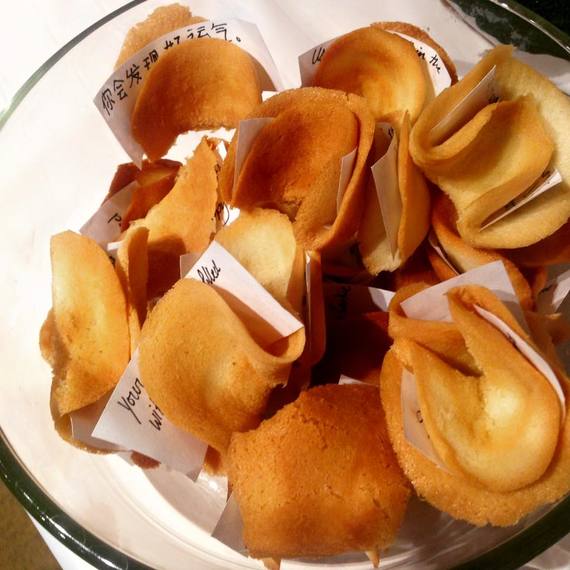 Fortune Cookies
A staple in American Chinese restaurants, fortune cookies were invented in California by Japanese Americans in the early 20th century. They were introduced in China in the 1990's as "Genuine American Fortune Cookies."

1. Write your fortunes! Set aside.
2. Preheat oven to 350º F. Using a ring or glass as a template, draw three 3-inch circles on a sheet of parchment paper.
3. Whip the egg whites on low speed until they are light and foamy. Blend in the sugar and continue to beat until they form soft peaks. Pour in the melted butter, flour, salt, almond and lemon extracts and mix until well combined.
4. Drop a spoonful of the batter into the circles and, using the back of a spoon spread the batter evenly making very thin circles. Because you must work quickly to shape, make just three at a time.
5. Bake for 5 to 8 minutes or until the edges are light gold.
6. Remove the cookies from the oven. Lay a fortune in the lower middle of the cookie, and, using a spatula, fold in half to make a semi-circle. Be careful because they will be very hot!
7. Bend the edges up toward each other to make a crescent. Place the cookies in a muffin tin to help hold their shape until crisp and repeat with the remaining batter.