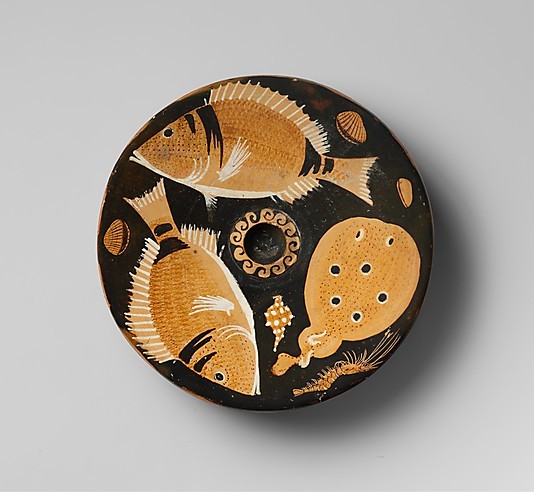 Thanks to a recent exhibit at The Getty (Sicily: Art and Invention between Greece and Rome) and a current one at The Huntington Library, Art Collections and Botanical Gardens (Lost & Found: The Secrets of Archimedes), I find myself fascinated by Sicilian culture.

The Huntington's exhibit focuses on mathematician, inventor and astronomer Archimedes (also highlighted at The Getty), who I imagine enjoying the bread and cheese written about by another Sicilian, Archestratus, while developing his heady theories. Archestratus lived about a century before Archimedes and wrote one of the most significant works on food of the ancient world. The Life of Luxury is a poem written between 360 and 348 BCE. Meant to be read aloud at the symposia (wealthy male drinking parties), the poem, which today exists in fragments, advises the gastronomic listener on where to find the best fish, bread and cheese throughout Greece, Southern Italy and Sicily, the coast of Asia Minor and the Black Sea. Archestratus repeatedly mentions the importance of fresh produce, chosen in the right place during the right season, and that food should be cooked simply and not buried under layers of spices and strong seasonings. (I like the way he thinks). The Roman Athenaeus cited the text about 500 years later in his own poem, Deipnosophistae (The Learned Banqueters), saving it from forever fading into obscurity.

The cuisine of Sicily was already renowned by the time Archestratus and Archimedes were strolling around the streets of Syracuse. Around 734 BCE, Greek colonists from Corinth introduced figs, pomegranates, olive trees, grapes and vineyards, building a considerable reputation for Sicilian wines. Native bees made honey used as offering to the goddess of love and beauty, Aphrodite. Rich pastures supported sheep and goats whose milk was made into the cheese we know today as ricotta.

Sicily's glory continued under the Roman Empire. Pliny the Elder wrote that Ceres, the Roman goddess of agriculture, taught milling and bread making there, and Emperors Augustus and Hadrian encouraged the development of agriculture. Durum wheat was planted on the island, turning it into the Empire's granary.

During the Middle Ages the island was taken over by Arab colonists who introduced rice, sugarcane and eggplants, and kept lush gardens of citrus, date palms, pistachios and apricots. By the early 16th century chocolate and tomatoes, native to Mexico, had made their way into the Sicilian pantry and Sicily, still on the forefront of gastronomy, became the center of chocolate production in Italy. With so many outside influences it is no wonder that Sicilian food is so unique!

This rustic eggplant dish is inspired by Archestratus and includes my latest ingredient obsession, anchovies. 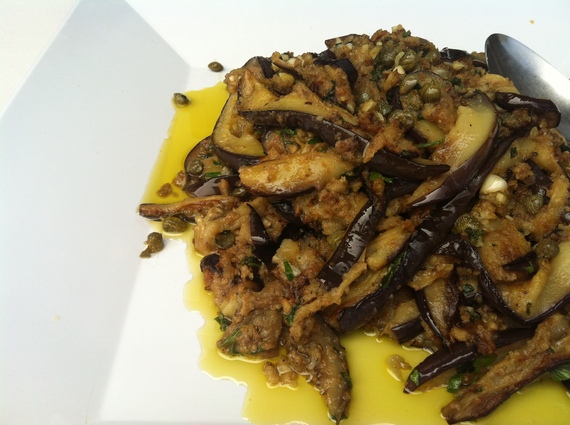 Eggplant with Anchovies and Capers
Athenaeus referred to eggplant as "the meat of the earth."

Fry the eggplant strips in olive oil until golden brown. Meanwhile, in a small bowl mix the breadcrumbs with the finely chopped garlic, capers, anchovies and parsley. And the bread mixture, salt and pepper to the pan with the eggplant and toss to coat. Taste, adjust seasoning and serve hot or at room temperature.

Maite Gomez-Rejon
Art and culinary historian and founder of ArtBites