I nearly did a back flip when, preparing for my upcoming Dining in the Aztec Empire class at the Getty Villa, I saw the Florentine Codex. Not a reproduction, but the real thing, back in the Americas for the first time in 430 years. Wow.

Also known as Historia general de las cosas de Nueva España ("General History of the Things of New Spain"), the Florentine Codex is the major source of Aztec life in the years before the Spanish conquest (1519-1521). It was thought of as an encyclopedia at a time when the discovery of the New World puzzled and fascinated Europeans, and has sections on religion, rituals, agriculture, commerce and crafts. With over 4,000 pages and 2,400 images, it is a dialogue between Aztec and European cultures, with illustrations combining Mesoamerican colors and forms with Renaissance shading and contrapposto poses. The codex gives us exhaustive lists illustrating food and dining in sixteenth century Mexico with maize, the most important crop of the Americas, making numerous appearances. (There is also a section which describes excessive pulque drinking as making people happy, sad, insufferable, romantic or just plain sleepy!). It was created under the supervision of Fray Bernardino de Sahagun (1499-1590), the father of ethnography and one of the first culinary historians. He began collecting material on the Aztecs from native informants, and illustrating and recording their culture in Spanish and Nahuatl (the Aztec language) a decade after the conquest.

At the Getty, the Codex is open to a page of gods and goddesses. Chicomecoatl, the goddess of ripe maize, pretty in a pink dress, caught my eye. In the next gallery she appears in the dramatic form of an incense burner holding two corncobs in each hand and wearing a headdress (amacalli) so large it appears as if she is peering through a temple. Her face and body are abstracted and geometric but her hands and the corncobs she holds are eerily realistic. 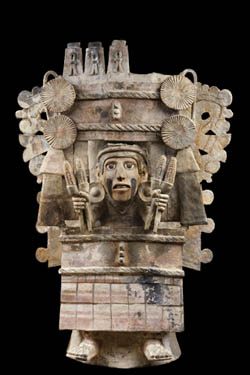 There is an image in the Florentine Codex where a group of men and women make offerings to the same goddess in front of a temple which looks very similar to the one Chicomecoatl appears to wear on her head. Another image (possibly my favorite in art history), shows a woman gently dropping shucked corn into boiling water while three unusual shapes float from her mouth. Maize was a life force in Mesoamerica and the woman blows kisses to the corn kernels to reassure them that they will be ok once they land in the boiling water.

Though the conquistadors were on a mission to convert each and every Aztec to Christianity, the Florentine Codex, along with archaeological evidence, is the most important existing source for understanding their civilization. The men that wrote and made these illustrations were very aware of what it meant to be an Aztec in New Spain at that particular moment in history, and their culture lives on through this imagery.

My only complaint is that I can't go through the book page by page. I so wish I could make a hole in that glass vitrine! It is housed in the Medici Library in Florence but is on display in the Getty Villa's The Aztec Pantheon and the Art of Empire exhibition through July 5th. Run to see it for yourself, then head home to prepare a simple recipe inspired by that sweet and reassuring gesture and by the goddess of ripe maize, Chicomecoatl. Buen provecho! 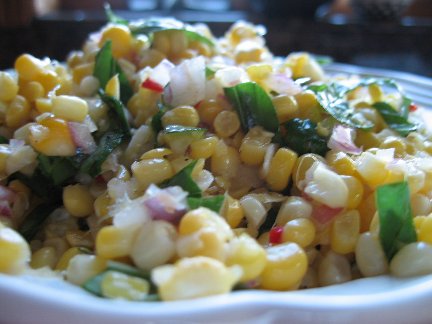 1. In a large pot of boiling salted water, cook the corn for 3 minutes. Drain and immerse in ice water. When cool, cut the kernels off the cob.
2. Saute the zucchini in butter over medium high heat until tender, about 4 minutes.
3. Toss the kernels and zucchini in a large bowl with the red onions, lime juice, salt, and pepper. Just before serving, toss in the fresh herbs. Taste, adjust seasoning and serve cold or at room temperature.